Pollution Assessment Based on Element Concentration of Tree Leaves and Topsoil in Ayutthaya Province, Thailand
Next Article in Special Issue

Romantic Competence and Adolescent Courtship: The Multidimensional Nature of the Construct and Differences by Age and Gender
Previous Article in Journal

The P.E.A.C.E. Pack Program in Italian High Schools: An Intervention for Victims of Bullying

Background: Bullying is a serious public issue, which mainly occurs in school with negative consequences for the students involved as victims. Very few teacher-delivered interventions have shown positive changes in the victims. The present study aimed at implementing the P.E.A.C.E. (Preparation, Education. Action, Coping, Evaluation) pack program, developed in Australia, in Italian high schools. Method: The effectiveness of the program was analyzed through an observational study (pre/post-intervention), involving 551 Italian high school students who completed a questionnaire on bullying victimization, self-efficacy, and bystander behavior. The students were divided into three groups (not involved students, occasional and severe victims) according to their self-reported victimization in the pre-intervention. Results: After the intervention, severe victims (victimized once/week or more often) showed a significant decrease in victimization and higher scores in self-efficacy, while an increase in victimization was observed in the not involved students. As reported by all the groups after the intervention, classmates were perceived more likely to intervene when a bullying episode occurred. By contrast, occasional and severe victims perceived their teachers as less likely to intervene. Conclusions: The P.E.A.C.E. pack is a promising program confirming in Italian schools the effectiveness already shown in other countries. This program is very useful for severe victims, supporting their self-confidence with a decrease in the frequency of aggressive episodes. View Full-Text
Keywords: bullying; victimization; teacher; adolescents; self-efficacy bullying; victimization; teacher; adolescents; self-efficacy
►▼ Show Figures 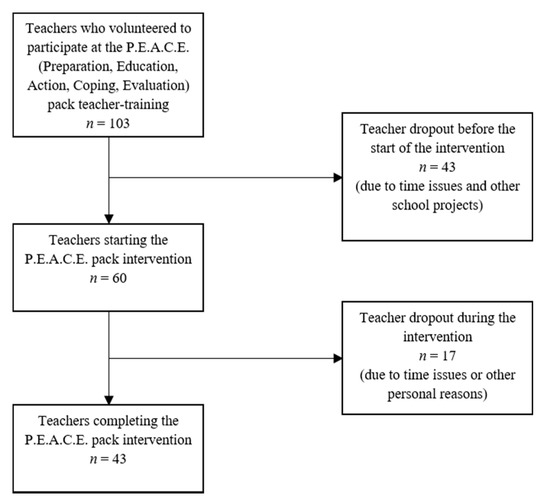