Experiences of Psychiatric Nurses Who Care for Patients with Physical and Psychological Violence: A Phenomenological Study
Next Article in Special Issue

Women and Physical Activity in Fitness Centres. Analysis of Future Intentions and Their Relationship with Age
Previous Article in Journal

Predictive Variables of Adolescents’ Intention to Be Physically Active after Graduation. Is Gender a Conditioning Factor?

Thus far, the differences in effect of auditory or visual feedback in motor learning have presented results derived from mixed groups and sex differences have not been considered. However, perception and processing of auditory stimuli and performance of visual motor tasks appear to be sex-related. The purpose of this study was to investigate the learning of the simple motor task of maintaining a requested handgrip force in separate male and female groups. A total of 31 volunteers (15 males, 16 females) were randomly assigned to one of four experimental groups with defined sex and training conditions (audio or visual feedback). Participants performed training sessions over a period of six days, for which auditory or visual feedback was provided, and the effectiveness of both types of signals was compared. The evident learning effect was found in all groups, and the main effect of sex was significant among visual groups in favor of the males (p < 0.05). On the other hand, the main effect of feedback conditions was found to be significant among females, beneficially in the case of auditory displays (p < 0.05). The results lead to the conclusion that an equal number of males and females in mixed experimental groups may be supportive to obtain reliable results. Moreover, in motor-learning studies conducted on females only, a design including auditory feedback would be more suitable.
Keywords: auditory stimulus; visual stimulus; motor learning; force control auditory stimulus; visual stimulus; motor learning; force control

Motor control and motor learning can influence the quality of human movement and are crucial components during sport skill acquisition, physical education and rehabilitation, work, and other forms of exercise. It is possible to accelerate these processes using intrinsic feedback and by providing extrinsic (augmented) feedback [1]. Numerous studies have been conducted to develop strategies to enhance motor performance, in which augmented feedback was essential [2]. Schmidt and Wrisberg [3] defined augmented feedback as information that cannot be elaborated without an external source; thus, it should be provided by a coach or a display. Such information can be provided in different single or combined modalities via various displays, e.g., visual, auditory, and/or haptic [4]. In recent research, the role of auditory information on perceptual-motor processes has gained increased interest [5]. Close interaction between the auditory and motor areas of the brain, and the importance of auditory information for movement execution, control, and learning was demonstrated. Interestingly, the auditory and motor systems are co-activated even when only movement or sound is produced [6,7]. However, there are reports indicating that sex differences exist in the perception and processing of auditory stimuli. Goldstein et al. [8] suggested that auditory working memory tasks induce different activation patterns in the auditory regions in males and females. McFadden [9] reported some differences in auditory perception, e.g., females had stronger optoacoustic emissions than males. This phenomenon has been found in newborns, which suggests that it is not connected to environmental experience [10]. Additionally, females are more sensitive to a given physical range of tones than males [11]. Ruytjens et al. [12] found sex differences in brain activity at the level of primary sensory cortex when comparing music and noise with the use of PET (positron emission tomography). Furthermore, it was also suggested that placing males and females in one group in auditory neuroimaging studies may obscure or bias the results [8].
Sex differences in task effectiveness when auditory feedback has been provided during motor learning have not been adequately investigated. Previous studies using augmented auditory feedback during sport skill acquisition [13] and physical rehabilitation [14] have not made adequate intersexual comparisons.
Therefore, the main aim of this study was to analyze sex differences in the effectiveness of learning the simple motor task of maintaining a requested handgrip force during daily training sessions over a period of six days. The trials were performed on separate male and female groups, for which auditory or visual feedback was provided, and the effectiveness of both types of signals were compared.

Data on requested handgrip force were collected with the Baseline® digital hydraulic hand dynamometer with transducer (Fabrication Enterprises, Inc., New York, NY, USA), with a sampling rate of 50 Hz. The electrical signal generated by the transducer was transmitted to a computer and processed by a custom-made program.
The continuous audio signal (sine wave 440 Hz) was generated by the computer routed to headphones (Technics RP-F300, Panasonic Corporation, Japan). The audio volume was set to a comfortable decibel level for an individual (≈40 dB). The continuous visual signal was provided as a white circle (⌀ = 13 cm) on a dark background on a 20” computer monitor, with a viewing area of 1600 × 900 pixels and a dot pitch width of ≈0.28 mm (Flatron W2043T-PF; LG:Seoul, Korea).

The maximum voluntary contraction (MVC) and performance tests (50% of MVC) were the principal tasks performed during the experiment. We instructed participants to sit on a chair 50 cm away from a computer monitor. The tested limb (dominant) was slightly flexed at the elbow joint, resulting in an approximate 135° angle between the arm and forearm. The palm and fingers were clasped around the handle. The MVC was calculated as an average of three trials (peak forces) of the maximum forearm strength [15]. The performance test was calculated as the average of the force level during a 6-s trial.
The experiment was performed one time per day during six consecutive days at approximately the same time and with an equal training program each day (Figure 1). We asked participants to follow the prompts displayed on the computer screen, on which necessary commands and information about the time remaining until subsequent tasks were given. At the beginning of the experiment, all individuals performed three MVCs (pre-test). After a rest period, participants were instructed to execute the performance pre-test. The result of the pre-test was the performance error (PE) for an individual, which was calculated as the size of the deviation from the expected value (50% of MVC: pre-test) as expressed in percentages.
Following 30 s of rest, the participants performed ten consecutive training trials for maintaining the target, i.e., 50% of MVC (6 s), with 10 s rest between each trial. The individuals received feedback on their performance via auditory or visual feedback, at a range of ±20 N from the target. The ranges were stable for males and females (between 272.2–312.2 N and 130.2–170.2 N, respectively), regardless of audio and visual groups. Under the auditory feedback conditions, once the individual matched the requested force range, a pure tone was perceived in both ears. Likewise, under the visual feedback conditions, the individuals matched the target force by triggering a display of a white circle on a dark background. The aim for participants was to maintain requested force in previously calculated and set range. In the case of being out of range, there was no auditory or visual feedback, and it was interpreted as an error. After the training session and successive rest, the performance post-test was performed. The result of the post-test for each individual was the PE (analogically to pre-test). At the end of the experiment, following 30 s of rest, individuals performed three MVCs (post-test) for the determination of their maximum forearm strength as a reference for PE post-test. The participants were not informed about the results of the performance pre-tests and post-tests during the entire 6-day period of the experiment.

Our results lead to the conclusion that an equal number of males and females in mixed experimental groups seems to be supportive to obtain reliable results, especially if a visual factor is applied as a feedback stimulus. On the other hand, in studies on athletes’ performances are conducted on sexually homogenous groups, due to the specific characteristics of different sports disciplines, a design of auditory feedback seems to have a more specific effect for female groups. Nevertheless, for the optimization of augmented feedback in sports and rehabilitation, further studies on sex differences need to be conducted on complex motor tasks.

The authors would like to acknowledge Mariusz Życiak for his contribution to the computer program designing and creating. 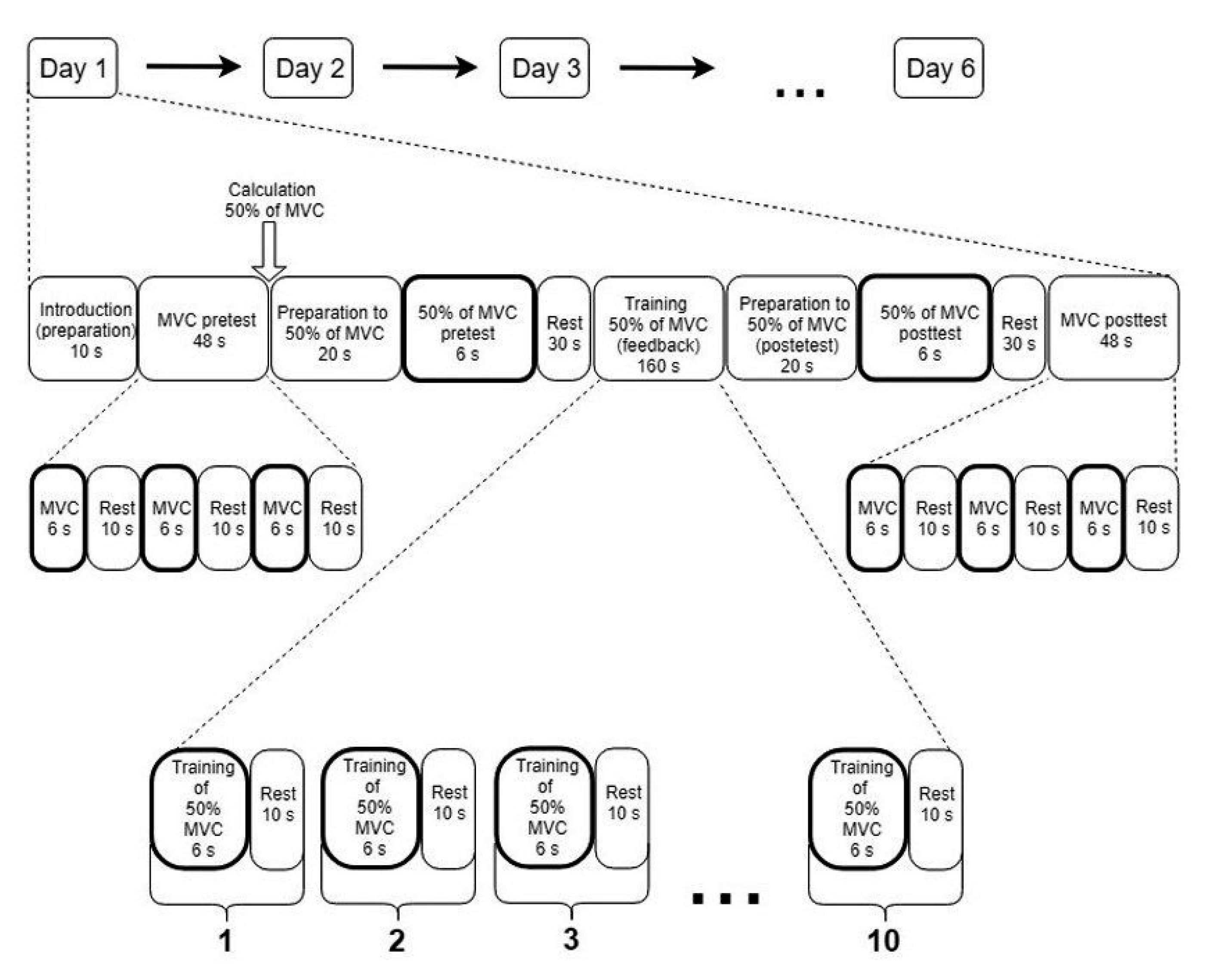 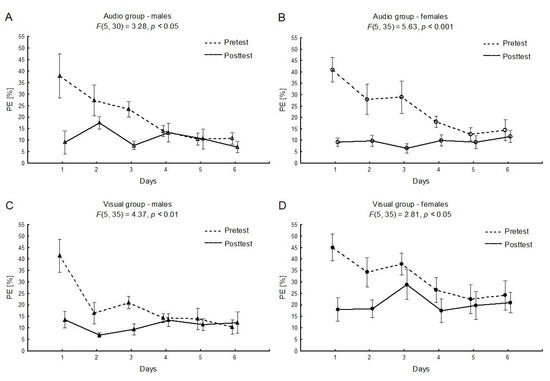 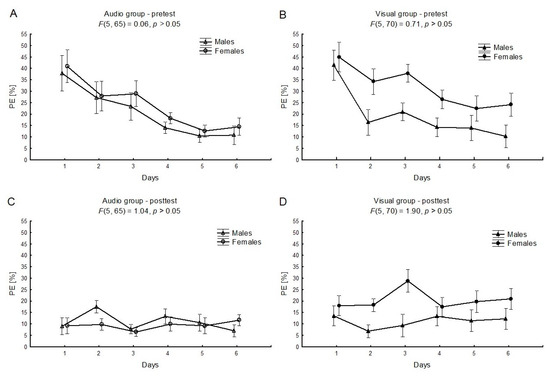