Causes and Phenotypes of Work-Related Asthma
Previous Article in Journal

A Resourceful Work Environment Moderates the Relationship between Presenteeism and Health. A Study Using Repeated Measures in the Swedish Working Population
Previous Article in Special Issue

Obesity in pregnancy is associated with adverse maternal and fetal outcomes [1]. An ‘umbrella’ description of all women with a BMI ≥ 30 kg/m2 as ‘obese’ may neglect the effects of increasing BMI above this threshold in relation to pregnancy risk, in addition to differences in the propensity to benefit from antenatal interventions. The National Maternity and Perinatal Audit, which utilises the WHO BMI classes [2], reports that in England, 13% of women at the time of booking their antenatal appointment fall within Class I (BMI of 30–34.9 kg/m2), 5% within Class II (35–39.9 kg/m2) and 2% within Class III (≥40 kg/m2) obesity [3].
A gradient of risk exists for the incidence of gestational diabetes (GDM) [4], pre-eclampsia [5] and large for gestational age (LGA) infants [6], as obesity severity increases in pregnancy. Furthermore, gestational weight gain (GWG) is an additional risk factor for pregnancy complications, demonstrating strong associations with LGA and macrosomic infants [7]. The National Academy of Medicine (NAM) (previously the Institute of Medicine) recommends a lower GWG range for all women with obesity of 5–9 kg [8]. These guidelines do not differentiate by obesity severity, attributed to a lack of evidence regarding maternal and newborn outcomes. There is some evidence to suggest that weight gain compatible with improved pregnancy outcomes is lower with increasing obesity class [9]; however, observational studies are inconsistent regarding an optimal GWG range for obese women. Weight gain below the NAM recommendations has been shown to be associated with an increased incidence of small for gestational age (SGA) infants, and although this risk is smaller in those with a BMI ≥ 40 kg/m2 [10], large-scale studies suggest the association remains for obesity classes I, II and III [11]. There is a need for robust evidence that quantifies GWG ranges for women with increasing severity of obesity.
The maternal diet is often targeted in interventions to reduce GWG, and has implications for pregnancy outcomes, alongside future maternal and offspring health [12]. Despite its potential as a modifiable risk factor, there is a paucity of research on the diet of pregnant women with obesity, although there are reports of suboptimal quality [13], with inadequate carbohydrate and excessive saturated fat intake [14]. Additionally, pregnant women in obesity Class III have been shown to consume an energy rich diet, deficient in key micronutrients, compared to women with a BMI < 25 kg/m2 [15]. This is of concern as weight gain in pregnancy compatible with the NAM guidelines has been observed in women with obesity in whom energy intake (EI) is less than energy expenditure [16]. There is a critical need for more information on the dietary intake of pregnant women with increasing obesity severity, in order to create informed nutritional guidelines for this high-risk group.
Antenatal lifestyle interventions have demonstrated modest reductions in GWG and improved dietary intake in women with a BMI ≥ 25 kg/m2 [17]. However, the reporting of pregnancy outcomes and health behaviours via obesity severity has seldom been attempted, and the validity of results when applied to women of different classes of BMI remains unquantified. This study aimed to determine the effectiveness of an antenatal intervention into the health behaviours and pregnancy outcomes in women with increasing obesity severity, using data from a large randomised controlled trial, the UK Pregnancies Better Eating and Activity trial (UPBEAT). Measures of both nutritional intake and physical activity were evaluated by obesity class in each arm of the trial, in addition to pregnancy outcomes. We have previously reported that the primary outcomes of reductions of GDM and LGA infants were not achieved, although the intervention group as a whole showed improved dietary intake, increased physical activity and reduced GWG, as well as maternal adiposity [18].

UPBEAT was a multicentre, randomised controlled trial across 8 UK sites (London (three centres), Bradford, Glasgow, Manchester, Newcastle and Sunderland), and was approved by the NHS research ethics committee (UK integrated research application system, reference 09/H0802/5). Women over 16 years with a BMI ≥ 30 kg/m2, a singleton pregnancy and gestational age between 15+0 and 18+6 weeks’ gestation, in the absence of any underlying disease, were eligible for inclusion. Following written informed consent, allocation to the control or intervention arm was undertaken by computer generated randomisation, and minimised by ethnicity (Black, White, Asian, other), parity (primiparous, multiparous), age (≤24, 25–29, 30–34, ≥35 years), BMI (30.0–34.9, 35.0–39.9, ≥40 kg/m2) and centre [19].

The UPBEAT intervention consisted of an initial interview with a health-trainer and a further eight weekly individual or group-based sessions of 1 to 1.5 h. The sessions addressed approaches to achieving goals related to the study aims. The dietary component of the UPBEAT intervention encouraged a healthier eating pattern without energy restriction. Dietary advice aimed to reduce glycaemic load (GL) and saturated fat intake. To reduce GL, participants were encouraged to exchange carbohydrate rich foods, such as bread, rice and potatoes, with a high glycaemic index (GI), for a low-GI version, and reduce the consumption of sugar sweetened beverages including fruit juice. To reduce saturated fat intake, the selection of dairy products and snacks with a lower saturated fat content was encouraged and a reduction in the intake of fatty meats and meat products was recommended [19]. To increase physical activity, advice focused on increasing daily step counts and being more active in daily life. This was individually tailored depending on goals set by intervention participants, however the objective was to encourage an incremental increase in walking from study entry, with focus on walking at a moderate intensity. Materials provided to intervention participants included a DVD of an exercise regimen appropriate for pregnancy, a pedometer and a log book for recording weekly goals. Pedometers were used for motivational and monitoring purposes only. The standard care arm of the trial entailed attending routine appointments at the trial centre, as per local practice.

Data were collected at three visits: study entry (15+0–18+6 weeks’ gestation), post-intervention (27+0–28+6 weeks’ gestation) and late gestation (34+0–36+0 weeks’ gestation). Study entry demographic data included age (years), BMI (kg/m2), ethnicity (Black, White, Asian, other), parity (nulliparous, multiparous), smoking status (smoker, ex-smoker, non-smoker), level of relative deprivation (Index of Multiple Deprivation quintiles [IMD]; scores were calculated for the region of residence), and highest educational attainment. Diet was assessed in all participants using a food frequency questionnaire (FFQ) adapted from the UK arm of the European Prospective Investigation into Cancer Study [20]. The list of food items was accompanied by a multiple response grid, and frequency of food consumed was estimated over the preceding month. An automated program transformed FFQ data into nutrient intakes. Participants estimated as under-reporting (≤4·5 MJ/day) and over-reporting (≥20.0 MJ/day) energy intake were excluded [20,21]. Physical activity was assessed using the International Physical Activity Questionnaire (IPAQ) [22]. In all participants, a 75 g oral glucose tolerance test (OGTT) was undertaken at 27+0 to 28+6 weeks gestation, and diagnosis of GDM was made in accordance with International Association of Diabetes and Pregnancy Study Groups (IADPSG) criteria [23]. If GDM was diagnosed, women were referred for routine management in their locality.

All data from women randomised to the control and intervention group were stratified by WHO obesity classes (30.0–34.9, 35.0–39.9 and ≥40.0 kg/m2), respectively. An analysis of variance (ANOVA) and a chi-square test, for continuous and categorical variables, respectively, were performed on the sociodemographic data collected from the whole group at study entry. To assess the effect of the UPBEAT intervention on dietary intake, an analysis of co-variance (ANCOVA) was used to compare the respective diets of obesity classes randomised to control and intervention, adjusting for study entry values. Adjusted linear regression was used to assess the effect of the UPBEAT intervention on the continuous pregnancy outcomes, with results expressed as mean differences and 95% confidence intervals (CI), and adjusted logistic regression was applied to binary outcomes, expressed as odds ratio (OR) with 95% CIs. The models were adjusted for confounders including index of multiple deprivation, parity, age, ethnicity and years in full-time education. To determine if the impact of intervention on dietary intake and pregnancy outcomes differed by obesity class, a series of models with interaction terms was fitted, and effect size compared with likelihood ratio tests. All analysis was conducted with Stata version 13 (StataCorp, College Station, Texas, USA), and p < 0.05 was taken as the level of significance.

The characteristics of the UPBEAT participants by obesity class at study entry are shown in Table 1. Approximately half of the participants were in obesity Class I (n = 765, 49%), a third in Class II (n = 508, 33%) and 18% (n = 281) in Class III. Class III women were more likely to reside in an area of high deprivation (51.6%), compared to those of Class I (40.4%) and Class II (43.0%). Educational attainment varied by obesity class, with more participants in Class III having education extending only to, or not meeting, GCSE level. There were no differences in age, ethnicity, parity, history of GDM or living area by obesity class.

This study highlights that the findings of antenatal interventions cannot be generalised for all pregnant women with obesity, as the pregnancy outcomes and health behaviours differed by obesity class. The greater efficacy of the UPBEAT intervention in lowering GWG in women with Class III obesity supports antenatal weight management strategies for women with severe obesity. More research, stratifying the effect of antenatal intervention on pregnancy outcomes and health behaviours by obesity class, is urgently required, to inform future strategies for improving the health of pregnant women with obesity.

UPBEAT was funded by the National Institute of Health Research (NIHR) (RP-PG-0407-10452); the Chief Scientist Office (CZB/4/680); and the Scottish Government Health Directorates, Edinburgh. A.C.F., S.L.W. and L.P. are supported by Tommy’s Baby Charity, UK. K.V.D. is supported by the British Heart Foundation. 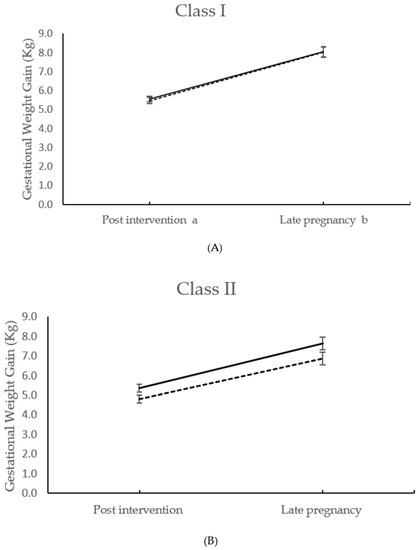 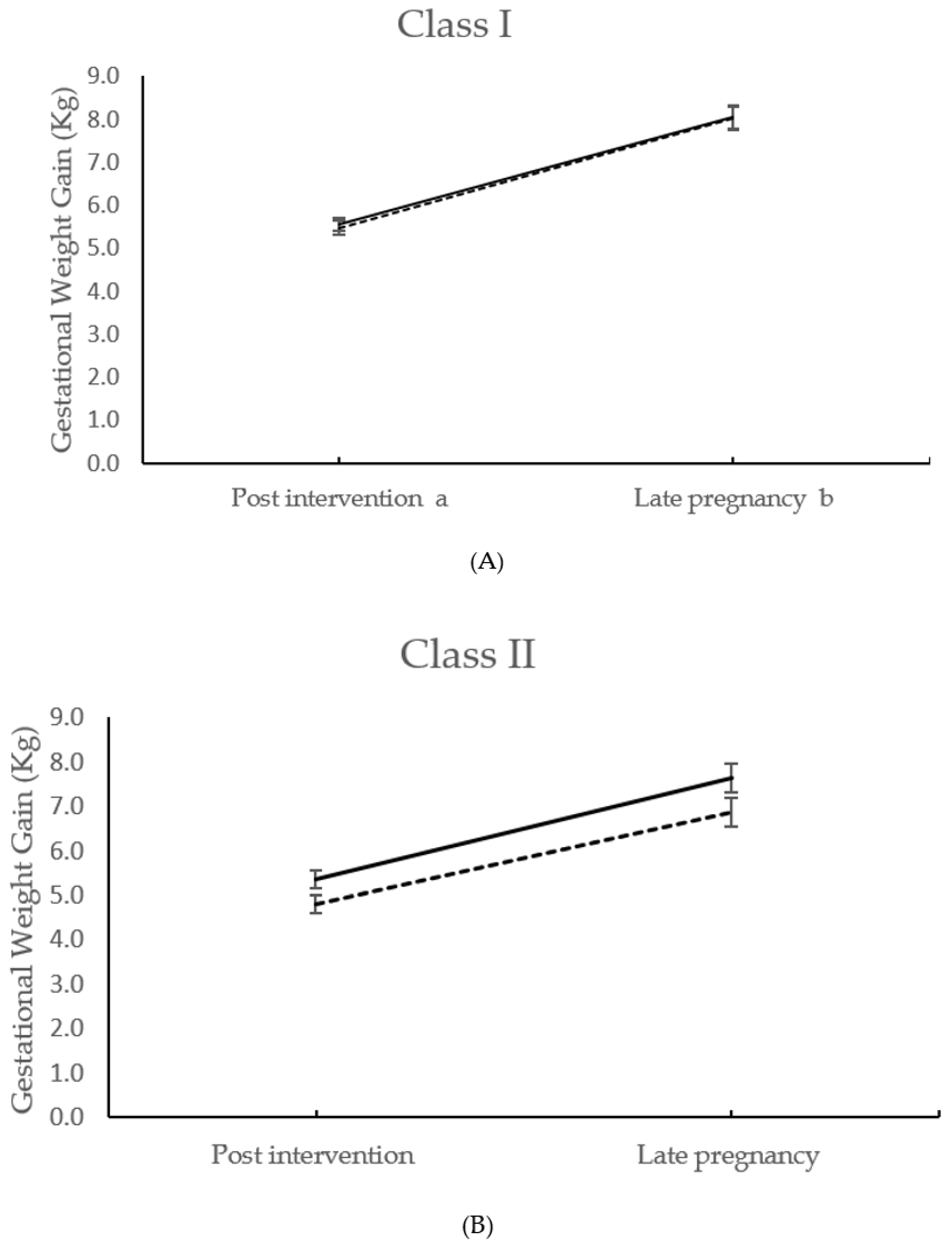 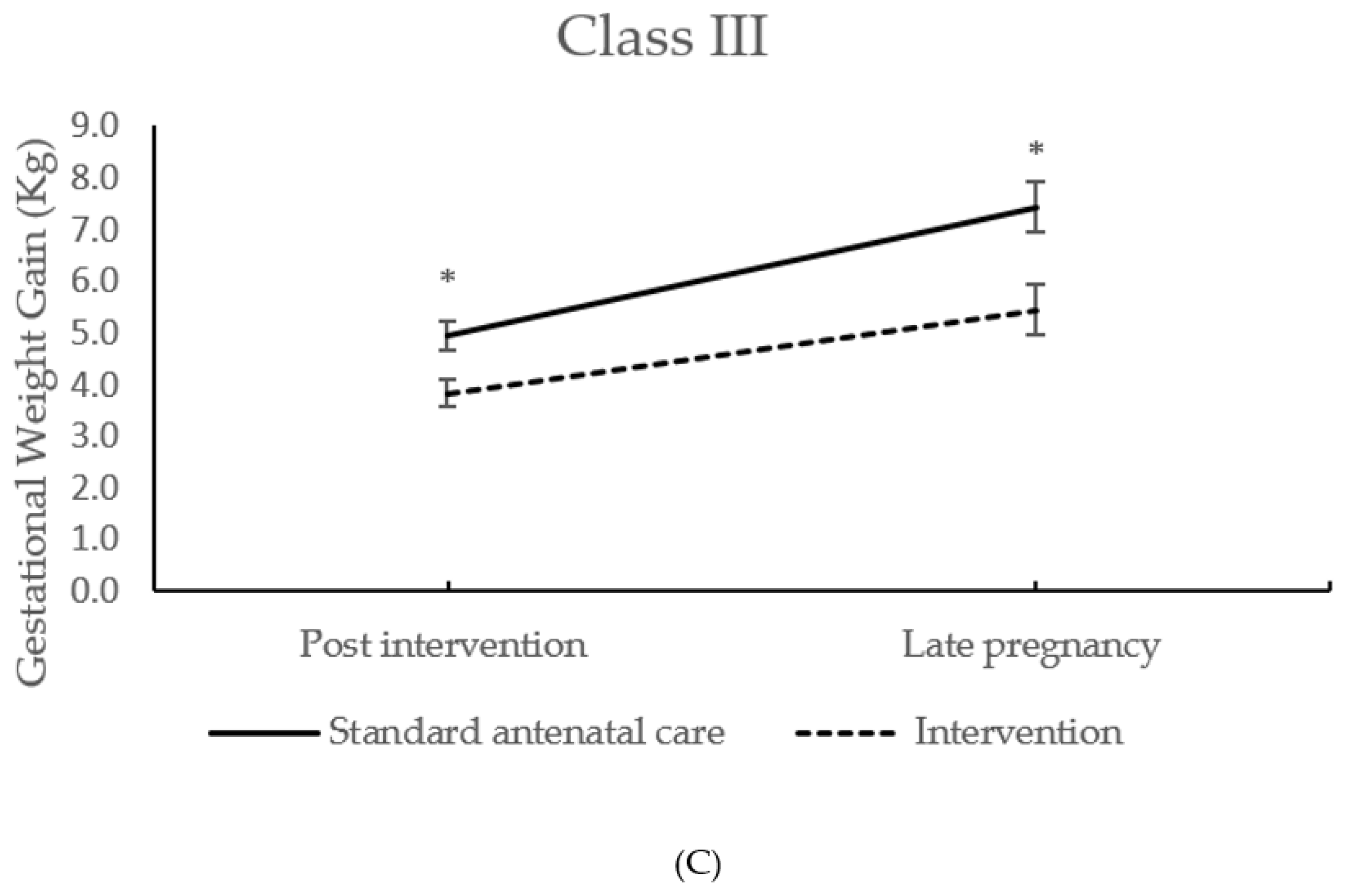 Table 3. Maternal and neonatal outcomes by intervention group and obesity class.
Table 3. Maternal and neonatal outcomes by intervention group and obesity class.
Data are mean ± SD, or number of women, or neonates/total (%) for maternal and neonatal outcomes, respectively. a Gestational weight gain was calculated using estimated weight pre-pregnancy weight. b Gestational diabetes was diagnosed using IADPSG criteria. c Calculated by addition of biceps, triceps, suprailiac and subscapular skinfold thicknesses. d p value to assess for difference in maternal/neonatal outcome between obesity class randomised to intervention and standard care, assessed using linear and logistic regression, adjusting for potential cofounders: index of multiple deprivation, parity, age, ethnicity and years in full-time education. p < 0.05 taken as significant. e p value to assess for the effect of an interaction of obesity class and intervention group on maternal and neonatal outcomes; only significant results are tabulated.
© 2020 by the authors. Licensee MDPI, Basel, Switzerland. This article is an open access article distributed under the terms and conditions of the Creative Commons Attribution (CC BY) license (http://creativecommons.org/licenses/by/4.0/).
We use cookies on our website to ensure you get the best experience. Read more about our cookies here.
Accept
We have just recently launched a new version of our website. Help us to further improve by taking part in this short 5 minute survey here. here.
Never show this again