Neighborhood Built Environment Measures and Association with Physical Activity and Sedentary Time in 9–14-Year-Old Children in Saskatoon, Canada
Next Article in Special Issue

Stakeholders’ Consensus on Strategies for Self- and Other-Regulation of Video Game Play: A Mixed Methods Study
Previous Article in Journal

:
Background: In recent years, the abusive use of the smartphone has reached a situation that could be considered pathological. In this sense, different instruments to assess this problematic use or addiction to the smartphone are used. One of these instruments is the Smartphone Addition Inventory (SPAI), which has been validated in the Spanish language (SPAI-Spain). The main difficulty of these scales is to establish a cut-off point that determines such mobile addiction. On the other hand, self-perception was used in different addictions as a predictor of the problem. Aim: The objective of this study was to establish the cut-off point in the scores of the SPAI-Spain, using as a reference the self-perception of addiction values. Methods: A receiver operating characteristics (ROC) analysis was carried out, establishing as the cut-off point the one that presented a higher value of Youden J, indicative of its sensitivity and specificity. Results: 2958 participants from the university community completed the SPAI–Spain questionnaire. Differences in SPAI–Spain scores were found among age groups and gender, even though not all of them were statistically significant. When using the self-perception of smartphone addiction as the benchmark value, a score of 44 was established as the cutting point of the SPAI-Spain questionnaire, with a Youden J corresponding to 0.416. Conclusions: The implementation of a cut-off point of the SPAI-Spain questionnaire makes it an instrument that allows early identification of those individuals at risk of addiction, as well as the establishment of preventive and/or intervention measures.
Keywords:
smartphones; addiction; self-perceived addiction; ROC analysis; cutoff point; SPAI–Spain

It is a cross-sectional observational study. The data collection instrument (in online format) was distributed among university students by using mailing lists from the University of Valencia’s central services as a mean of dissemination after obtaining the permission of the University Rector’s office. Data were collected from 5 to 28 April 2017.
The University of Valencia postgraduate studies ethics committee reviewed and approved this study. All the participants gave their written consent to their voluntary and anonymous involvement before completing the inventory.
The inclusion criteria were as follows: age over 17 years old, having a smartphone, and being a student of any discipline at the University of Valencia. The participants were selected using nonprobabilistic convenience sampling. Although the selection of the participants was made by convenience sampling, it must be said that it reflected the reality of the university population.

The instrument designed allowed us to collect information about the sociodemographic characteristics of the population, patterns of mobile phone use, and the subjective perception of smartphone dependence, by using a numerical scale (1–10); the SPAI–Spain inventory used for the analysis of smartphone addiction was also included.
The SPAI–Spain instrument [39] shows adequate indices of internal consistency (α = 0.94) and consists of 22 items, four less than its original version [41]. Each item is answered by a Likert scale ranging from 1 (strongly agree) to 4 (strongly disagree), obtaining a global score between 22 and 88. The higher the score obtained, the higher the degree of addiction. The original SPAI scale [41] obtained a global Cronbach’s alpha of 0.949. Each of its corresponding factors, compulsive behavior, functional impairment, abstinence, and tolerance, obtained the following Cronbach’s alpha indexes = 0.856, 0.888, 0.855, and 0.712, respectively. The overall Cronbach’s alpha indexes of the SPAI–Spain version [39] were 0.95 for the global scale and 0.87, 0.88, 0.81, and 0.72 for each of its factors.

Receiver operating characteristics (ROC) analysis was conducted to examine the diagnostic efficacy of the SPAI–Spain for smartphone addiction by using the area under the ROC curve (AUC). Through this analysis, the probability of correctly classifying a subject as an “achiever” of a specific characteristic (sensitivity of the test) was compared with the probability of classifying as “achiever” somebody who was not (1-specificity). This analysis leads to obtaining an optimal cutoff point, from which it was possible to correctly classify the most significant number of subjects [44].
Thus, to obtain a cut-off score of the SPAI–Spain, two variables that measure dependence on the smartphone, self-perception of the dependency and hours of dedication, were used as criterion variables. These two variables were chosen because both obtained high correlations with the final score of the SPAI–Spain, Spearman’s r 0.595, and 0.447, respectively.
Self-perception of dependency was evaluated using a Visual Analogical Scale (VAS). The subject was asked to rate their level of dependence from 0 to 10, with 0 being “I do not consider myself dependent on the smartphone at all” and 10 “I consider myself totally dependent on the smartphone.” We decided to use a VAS scale to evaluate dependence, in a similar way as this type of scales are used for assess pain levels, thereby being able to evaluate dependence objectively.
The phone usage time was evaluated by asking the subject the number of hours he or she spent using the smartphone daily (less than two hours, between two and four hours, or more than four hours).
Both criterion variables were dichotomized to conduct ROC analysis, considering as “dependent” those subjects who indicated scores between 8 and 10 in the smartphone’s dependence self-perception or those who used their phone 4 h or more a day. “Not dependent” subjects were those with scores lower than 8 in the variable smartphone’s dependence self-perception or those who used it less than 4 h a day.
The sensitivity, specificity, and Youden’s J were calculated for each SPAI–Spain score. The cutoff point for the SPAI–Spain was optimal for smartphone dependence diagnosis when the score was accompanied by the higher Youden’s J.
Youden’s J is the maximum vertical distance from the ROC curve to the line between (0, 0) and (1, 1). When sensitivity and specificity are equally weighted, the optimal cutoff point is the point with the highest value of J, calculated according to the formula (sensitivity + specificity – 1) [45].
Subsequently, the percentage of false negatives and true positives was assessed using a cross-tabulated table to determine the best criterion variable. Diagnostic accuracy achieved at each score was also calculated.
Analyses were carried out using SPSS Version 24.0. Armonk, NY: IBM Corp. and Microsoft Excel 2010 spreadsheets for Windows.

3.1. Characteristics of the Studied Population

The SPAI–Spain questionnaire was completed by 2,958 participants whose sociodemographic characteristics, as well as the profile of use of the smartphone, are shown in Table 1.

In order to identify the most suitable cutoff point, the sensitivity and specificity corresponding to each of the scores of the questionnaire for the variable dependence perception and dedication hours, as well as the Youden index, were calculated. It was established that the cutoff point would be the SPAI–Spain score corresponding to the highest value of the Youden index. In the case of dependence self-perception, it was established at score 44 (corresponding to a Youden’s J of 0.416). In contrast, in the case of the variable hours of dedication, the cut-off point was established at the value 42 (which corresponds to a Youden’s J value of 0.278).
In the supplementary files, we included detailed tables with sensitivity, specificity, positive and negative predictive values, diagnostic accuracy, and Youden’s J values for each SPAI–Spain score, according to both external criteria (dependence self-perception and dedication hours).
From these cut-off points identified according to the two established criteria, the percentage of subjects who would be adequately classified with each of said cutoff points was calculated. These results are shown in Table 2.
Although the cutoff point is stricter using the hours of dedication as a criterion variable, the percentage of true positives (dependent–addicts) is higher in the case of the variable self-perception of dependence (73.2% versus 71.8%). Likewise, the percentage of false negatives is higher by using as the variable self-perception of dependence rather than hours of dedication (68.4% versus 56.0%). Subsequently, the score 44 in SPAI–Spain is considered as its cutoff point. It is the one obtained when considering the subjective self-perception of dependence as a criterion since it allows us to classify better both the nondependent subjects and the dependent subjects.
Once the score of 44 (as the cutoff point of the questionnaire) was determined, the percentages of subjects that would be considered as dependent were analyzed, based on characteristics such as the participants’ gender and age. These results are shown in Table 3 and Table 4.
This analysis of the differences by using the chi-square test allowed us to conclude that there were no statistically significant differences between men and women (chi-square = 2.85 degrees of freedom (df) = 1; p = 0.09). However, some significant differences were perceived between age groups (chi-square = 106.68; df = 2; p < 0.001).

The statistical analysis performed allows the establishment of a cut-off value for the SPAI–SP scale at 44, based on the self-perception of addiction.
The cut-off point established for the SPAI-Spain presents adequate sensitivity and specificity values, as well as adequate diagnostic accuracy.
The establishment of its cut-off point allows the use of the scale as a diagnostic tool to improve the detection and early treatment of addicted persons.

We are grateful for permission from the SPAI’s authors for its translation and use as well as for the voluntary participation of the University of Valencia members as respondents in this study. 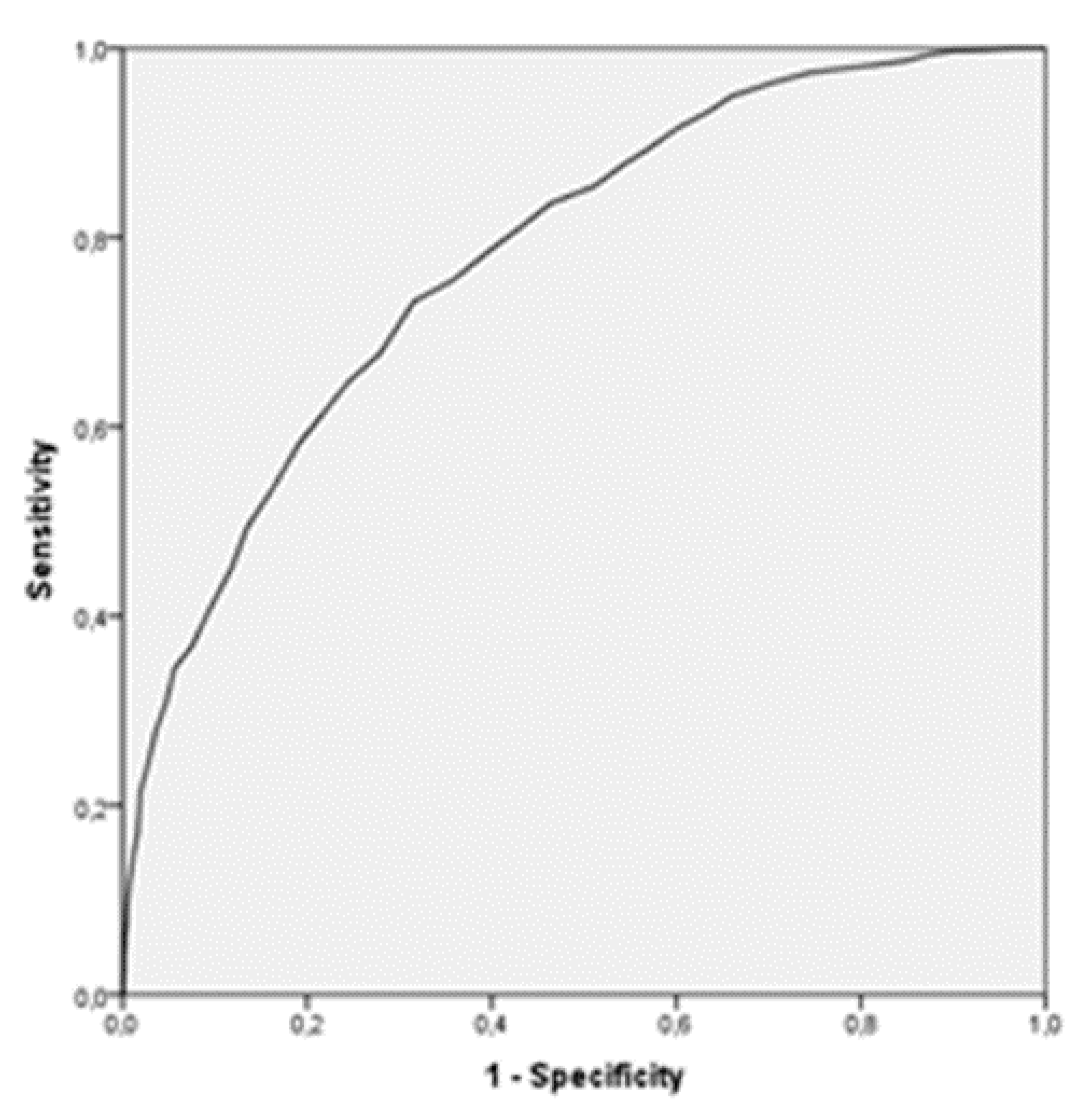