Enhancement of Chromium (VI) Reduction in Microcosms Amended with Lactate or Yeast Extract: A Laboratory-Scale Study
Previous Article in Journal

Is Post-Reprocessing Microbiological Surveillance of Duodenoscopes Effective in Reducing the Potential Risk in Transmitting Pathogens?
Previous Article in Special Issue

Gerald A. LeBlanc
2 and

A great deal of attention has been paid lately to release of phthalate esters (PAEs) from polyethylene terephthalate (PET) bottles into PET bottled drinking water due to their potential endocrine-disrupting effects. Three kinds of PAEs, including diethyl phthalate (DEP), dimethyl phthalate (DMP) and dibutyl phthalate (DBP), were detected in 10 popular brands of PET bottles in Beijing, ranging from 101.97 μg/kg to 709.87 μg/kg. Meanwhile, six kinds of PAEs, including DEP, DMP, DBP, n-butyl benzyl phthalate (BBP), di-n-octyl phthalate (DOP) and di(2-ethylhexyl) phthalate (DEHP), were detected in PET bottled water, ranging from 0.19 μg/L to 0.98 μg/L, under an outdoor storage condition, while their concentrations ranged from 0.18 μg/L to 0.71 μg/L under an indoor storage condition. Furthermore, the concentrations of PAEs in brand D and E bottles were slightly increased when the storage time was prolonged. In addition, the concentrations of PAEs in commercial water contained in brand B and H bottles and pure water contained in brand E and G bottles were also slightly increased with the increase of storage temperature. Interestingly, DBP mainly contributed to the increased PAEs levels in simulation water. These results suggest that a part of the PAEs in PET bottled water originated from plastic bottles, which was related to the storage time and temperature. However, the PAEs in PET bottled water only pose a negligible risk to consumers if they follow the recommendations, such as storage at a common place (24 °C), away from sun and in a short period of time. View Full-Text
Keywords: PET bottles; contained water; PAEs; migration; health risk PET bottles; contained water; PAEs; migration; health risk
►▼ Show Figures 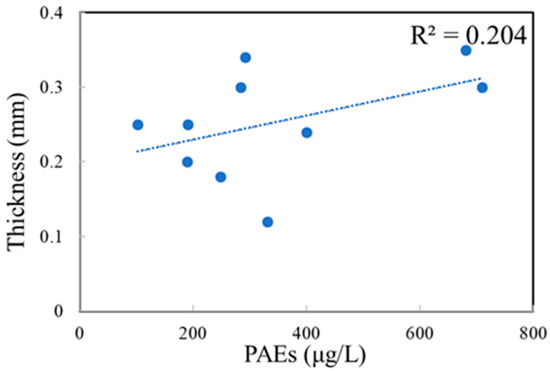