Does the Development of a High-Speed Railway Improve the Equalization of Medical and Health Services? Evidence from China
Previous Article in Special Issue

Soil erosion and landslide triggered by heavy rainfall are serious problems that have threatened water resources in Taiwan watersheds. This study investigated the relationship among streamflow, sediment load, sediment concentration and typhoon characteristics (path and rainfall amount) during 2000–2017 for nine gauging stations in five basins (Tamshui River basin, Zhuoshui River basin, Zengwen River basin, Gaoping River basin, and Hualien River basin) representing the diverse geomorphologic conditions in Taiwan. The results showed that streamflow and sediment load were positively correlated, and the correlation was improved when the sediment load data were grouped by sediment concentration. Among these basins, the Zhuoshui River basin has the highest unit-discharge sediment load and unit-area sediment load. The soil in the upstream was more erodible than the downstream soil during the normal discharge conditions, indicating its unique geological characteristics and how typhoons magnified sediment export. The spatiotemporal variation in sediment loads from different watersheds was further categorized by typhoons of different paths. Although typhoon path types matter, the Zhuoshui and Hualien River basin were usually impacted by typhoons of any path type. The results indicated that sediment concentration, the watershed soil characteristics, and typhoons paths were the key factors for sediment loads. This study can be useful for developing strategies of soil and water conservation implementation for sustainable watershed management.
Keywords: soil erosion; sediment transport; typhoons; watershed management soil erosion; sediment transport; typhoons; watershed management

Located at the junction of the Philippine Sea Plate and the Eurasian Plate, the high terrain in Taiwan was formed due to the strong orogeny and frequent earthquakes. Taiwan has young geological property and fragile rock formation. Taiwan is the 13th highest precipitation country in the world, with an average annual rainfall of 2500 mm. The rapid flows from steep slopes are difficult to store in rivers. Due to the spatiotemporally uneven rainfall distribution and high population density, the available rainfall per person is less than one-sixth of the world’s average value, which indicates that Taiwan is the 18th high water-deficient country in the world [1]. Thus, reservoirs have been built in middle and upper reaches of rivers for water storage. In order to meet the increasing water demand from industry, agriculture, and municipal usage, water and soil conservation in upstream hillslopes are important to extend the reservoir life. Nevertheless, the balance of sediment transport in rivers can still be affected by land development in a basin. During the wet season, typhoons invade Taiwan with heavy rainfall that wash hillslopes, causing landslides and debris flow into downstream areas. Many of the sediment disasters are caused by serious scouring of siltation in rivers, such as large-scale constructions in upstream areas and channels, destruction of vegetation, and excessive sediment gravels that seriously influence the sediment balance in rivers. The overloaded sediment yields brought by stormflows frequently cause serious river bank damage and bed scours, which further threaten the lives and property of conservation structures.
Sediment yields in estuary areas are mainly from middle and upstream reaches, which can be traced back to sediments generated by slope failure, hillslope erosion and river bed scouring [2]. Materials in rivers can be transported by three pathway types, which are dissolved matter, suspended load and bed load. The dissolved matter refers to materials that dissolve in water as ions and move with the flow; the suspended load majorly consists of clays, silts and fine sands, which are transported in suspension; the bed load are usually large sands, gravels and cobbles, and move through saltation, rolling and sliding near the bed [3]. Because bed load is difficult to measure and the more easily-measured suspended load accounts to a significant portion of the total sediment load, most studies focus on the suspended load when dealing with the issues of sediment transport, e.g., [4,5,6,7,8]. The high positive dependency between the suspended load and discharge has been reported since larger discharge of faster and more turbulent flow has larger hydrodynamic forces to carry sediments [9,10,11]. A sediment rating curve is the correlation between the suspended sediment concentration and discharge. This method has been widely applied and the power function is the most frequently used among various calibrating equations [6,8,12,13,14,15]. However, such positive correlation shows distinctive differences among dates, seasons, and regions [11]. Thus, calibration of rating curves is necessary to investigate the suspended load-discharge correlations among different areas in different seasons. Based on this reason, the regional and seasonal variations of rating curves should gain their attention in the studies focusing on the sediment transport issues in Taiwan.
Rainfall variation can result in sediment disasters. Many studies have reported that the precipitation decreased in southern Taiwan and increased in northern Taiwan [16,17], and the number of annual rainy day has significantly decreased in response to climate change [18]. However, trends of increasing maximum daily rainfall and the average daily rainfall intensity of a year. This indicates that more precipitation has been received during a year but the precipitation was more concentrated to fewer days and caused more intensive rainfall events, resulting in a higher frequency of flood and more serious damage caused by relative disasters [18]. Some critical rainfall conditions, such as rainfall intensity, duration, and accumulative precipitation, were proposed as the thresholds for debris flow and/or landslide occurrence and warning announcement [19,20,21,22,23]. Besides the rainfall variation, extreme weather events (i.e., heavy rains and typhoons) can also affect sediment loads in rivers. The discharge during extreme events is recognized as the major transporting force of the suspended load [2,4,24]. Reference [25] showed that the major source of sediment discharge in Sinwulyu River basin in eastern Taiwan was brought by typhoon and heavy rainfall events by analyzing the satellite images for landslide distribution after six typhoons and two earthquakes occurred in that region. Moreover, Taiwanese studies have indicated that typhoon and heavy rain events have led to significant increase from tenfold to couple hundred times in the suspended load of rivers during the peak discharge in Shihmen Reservoir basin [26] and Zengwun River basin [27]. [5] proposed that during 1975–1996 suspended sediment loads during typhoon events accounted for 59% of the total suspended load but typhoon duration only accounted for 6.47% of the total duration.
This study aims to investigate the correlation between the sediment load and discharge in Taiwan by studying the relationships among streamflow, sediment transport, sediment concentration, and maximum daily typhoon rainfall during 2000–2017 for nine gauges in five basins (Tamshui River basin, Zhuoshui River basin, Zengwun River Basin, Gaoping River basin, and Hualien River basin).

Based on the typhoon invasion path classification standard of the Central Weather Bureau in Taiwan, typhoon paths are categoraized into ten types (Figure 2). Among the ten paths, the major paths are type 1, 2, 3, 5, and 6, and the occurrence percentage of each major path type accounted for more than 10% of the total typhoon occurrence during 1911 to 2017. In Figure 2, typhoons with path types 2 and 3 invaded Taiwan from the east coast and across the island to the west through northen and central Taiwan, respectively. Typhoons with path types 1 and 5 went from southeast to northwest and passed the northern and southern sea areas of Taiwan, respectively, without making land on the island. Path type 6 typhoons passed by the eastern sea area of Taiwn from south to north along the east cost of the island. Generally, typhoon invasions increase the amount and intensity of rainfall in the affected areas. The Tamshui River basin located in northen Taiwan was more affected by typhoons with path types 1 and 2; the Zhuoshui River basin located in central Taiwan was affected by typhoons with type 3. Path type 3 and 4 typhoons affected the Zengwen and Gaoping River basins in southern Taiwan. The Hualien River basin located eastern Taiwan was affected by type 2 and 3 typhoons since those typhoons landed on Taiwan from the east coast near the river basin.
Figure 3 shows the daily streamflow during 2000–2017 at the downstream gauging stations of each river basin. The highest maximum daily streamflow during the period were identified with the corresponding typhoons, which are mostly path types 2 (typhoons Krosa, Sinlaku, Saola), 3 (typhoons Toraji, Morakot, Megi, Sepat), 5 (typhoon Usagi), and 6 (typhoons Xangsane, Mindulle) typhoons. Furthermore, a list of cumulated daily discharge and maximum sediment concentration during indentical typhoon events of 2000–2017 is shown in Table 4.
For STN_2 in the Tamshui River basin, typhoons Krosa and Sinlaku of path type 2, and typhoon Xangsane of path type 6 brought the top three greatest maximum daily streamflows and cumulated daily discharges (Figure 3a and Table 4a). However, the maximum sediment concentration from typhoons Krosa and Sinlaku was lower than that of typhoons Soudelor, Megi, Matmo, Fungwong (path type 3), and Xangsane (path type 6) (Table 4b). This shows that typhoon path could have some influence on how sediment will be eroded from the landscape. For STN_4 at the Zhuoshui River basin, several typhoons (Toraji, Haitang, Bilis, Sepat, Krosa, Sinlaku, Morako, Saola) brought very high cumulated daily discharges (>7000 m3/s) (Table 4a). Among these typhoons, typhoon Toraji, Morakot and Saola were identified for their highest maximum daily streamflow (Figure 3b). These typhoons belong to same path types (Type 2 and 3), showing the specific types of typhoon path would have a greater influence on the Zhuoshui River basin. Moreover, typhoons of path type 3, such as typhoon Sepat and Matmo would have greater power to flush the sediments and resulted in large numbers of maximum sediment concentration (Table 4b).
For STN_6 at the Zengwen River basin, the top two values of cumulated daily discahrge and maximum daily streamflow were found during typhoons Morakot and Megi (path type 3, Figure 3c and Table 4a). The maximum sediment concentration during typhoon Morakot (path type 3), Fanapi (path type 4), and Nari (path type 10) were obviously higher and between 6288–7278 ppm (Table 4b). However, the cumulated daily discharge during typhoons Fanapi and Nari were one-third and one-fourth of the discharge during typhoon Morakot, respectively (Table 4a). This shows that typhoons of path type 3 directly passed through the upstream of the Zengwen River basin could easily erode the sediments, and thus sediment concentration was not diluted due to high level of discharge.
For STN_7 at the Gaoping River basin, typhoon Morakot brought the highest cumulated daily discharge, followed by typhoons Mindulle and Sinlaku (Table 4a), and the heighest maximum daily streamflow during typhoons Morakot and Mindulle was found to be significantly larger than that in other events (Figure 3d). Moreover, typhoon Toraji, which belongs to path type 3 like typhoon Morakot, had a greater maximum sediment concentration than that of typhoon Sinkalu (path type 2), but the cumulated daily discharge in typhoon Toraji was smaller than that in typhoon Sinkalu, showing that typhoons of type 3 could have greater influence on sediment discharge than typhoons of type 2. For STN_9 at the Hualien River basin, typhoons Sepat and Usagi have the highest maximum daily streamflow and cumulated daily discharge (Figure 3e and Table 4a), and the highest maximum sediment concentration was found during typhoon Toraji (Table 3). Typhoons of path type 3 (typhoons Sepat abd Toraji) showed more impacts on both water discharge and sediment concentration in the Aualien River basin.

We especially thank the Ministry of Science and Technology, Taiwan for the funding. 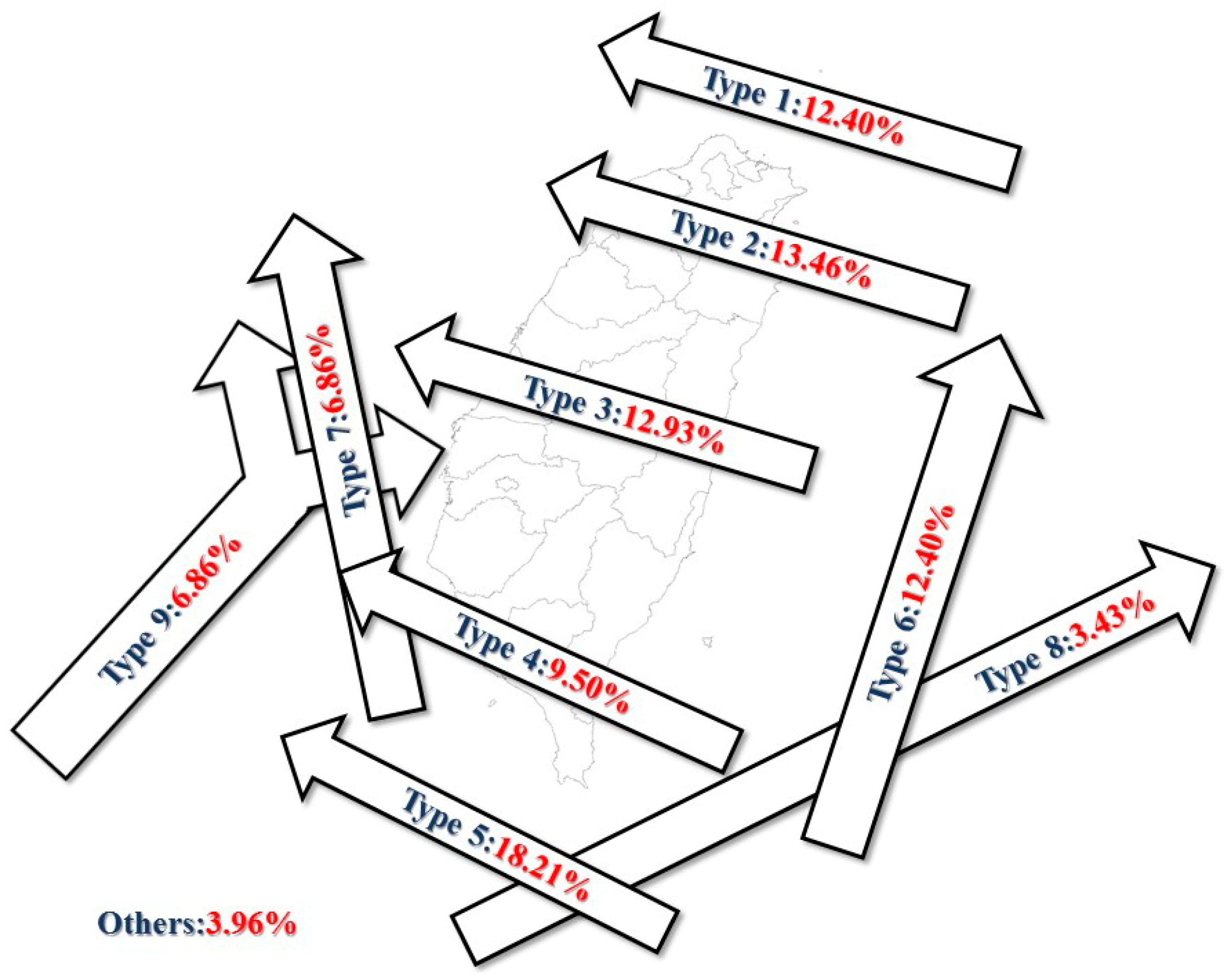 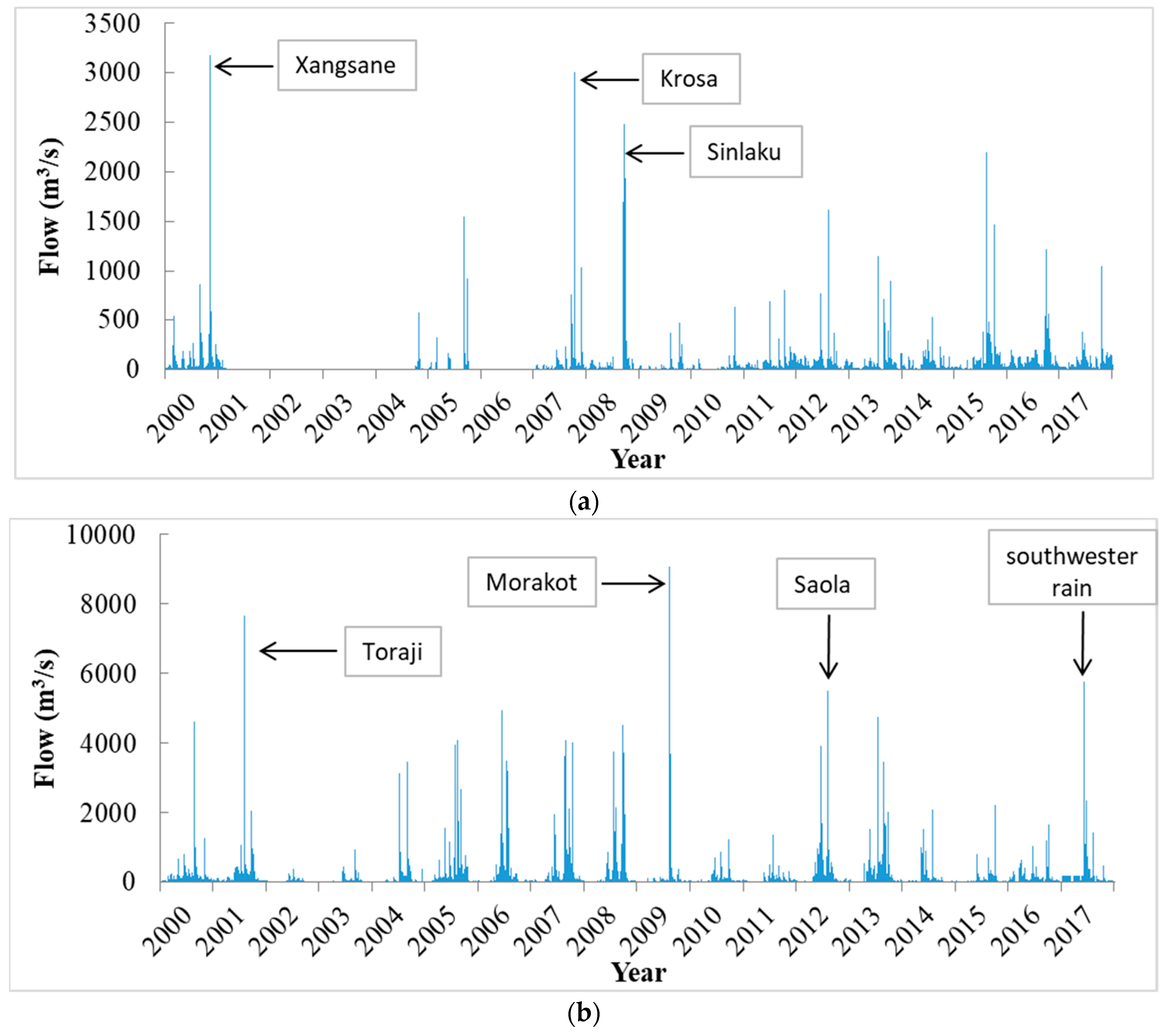 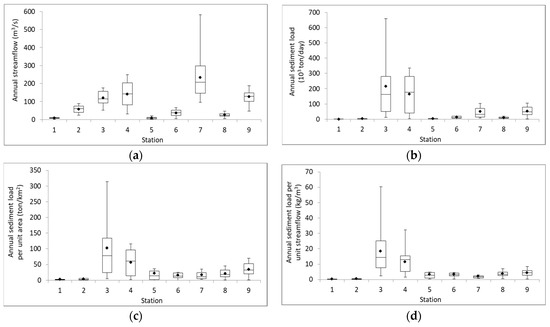