A Model for Promoting Occupational Safety and Health in Taiwan’s Hospitals: An Integrative Approach
Next Article in Special Issue

How Are Self-Reported Physical and Mental Health Conditions Related to Vaping Activities among Smokers and Quitters: Findings from the ITC Four Country Smoking and Vaping Wave 1 Survey
Previous Article in Journal

Truth Telling about Tobacco and Nicotine

Background: Most studies on perceived risks of smokeless tobacco products (SLT) have been conducted in the U.S., and the vast majority conclude that perceptions of the relative harmfulness of SLT versus cigarettes in the population are inconsistent with epidemiologically-based risk estimates, and typically conflated to that of cigarettes. We tested whether such inaccuracies also existed in Norway, where SLT-products are less toxic (Swedish snus) and SLT use is more prevalent than in the U.S. Methods: Over a 16 years period (2003–2018), 13,381 respondents (aged 16–79 years) answered questions about risk perceptions in Statistics Norway’s nationally representative survey of tobacco behavior. We applied an indirect measure of comparative harm where risk beliefs for eight nicotine products were assessed independently of other products and then compared the answers. The wording of the question was: “We will now mention a variety of nicotine products and ask you how harmful you think daily use of these are. Use a scale from 1 to 7, where 1 is slightly harmful and 7 is very harmful”. Mean scores with 95% confidence intervals were calculated. Results: The overall risk score for cigarettes was 6.48. The risk score for snus was 5.14–79.3% of the risk score of cigarettes. The relative risk scores for e-cigarettes (3.78) and NRT products (3.39) was 58.4% and 52.3% when compared to cigarettes. Perceptions of risk were stable over time. A strong association was observed between perceived risk of snus and having used snus in attempts to quit smoking. Conclusion: Perceptions of relative risk between snus and cigarettes is inconsistent with estimates from medical expert committees, which assess the overall health risk from use of Swedish snus to be minor when compared to the risk from smoking. Like the situation in the US, incorrect beliefs about SLT risks seem to be prevalent also in the snus-prevalent Norwegian setting. Accurate information on differential harms needs to be communicated. Future research should try to identify reasons why health authorities in the US and Scandinavia allow these well-documented misconceptions to persist. View Full-Text
Keywords: smokeless tobacco; snus; risk perception; tobacco; relative risk perception; e-cigarettes; NRT smokeless tobacco; snus; risk perception; tobacco; relative risk perception; e-cigarettes; NRT
►▼ Show Figures 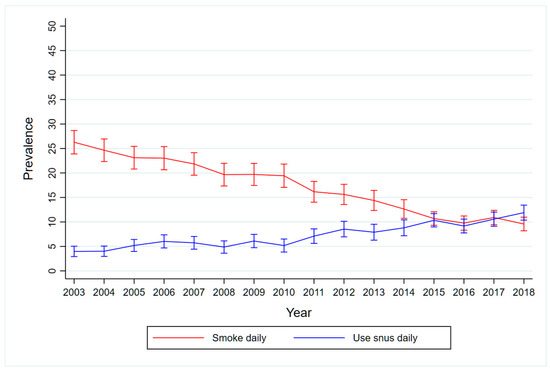