The participants were recruited from 18 February 2018 to 2 March 2018 at Shanghai Jiao Tong University by the posting of advertisements on notice boards and through official WeChat links and emails of the university. The participants interested in this study could get in touch with the investigators through the WeChat ID posted on the advertisement. Then participants were screened for eligibility via a questionnaire on WeChat. The eligibility criteria included the following: aged 18–24 years, owning a smartphone, and having an active WeChat account. The participants were excluded if they were already participating in a physical activity study, would participate in other physical activity programs during the study, responded “yes” to any questions on the physical activity readiness questionnaire indicating health risks for participating in physical activity, had been told not to exercise by a physician, were currently pregnant, or if there was any other concern that participation was unsafe or infeasible. Finally, 54 students enrolled in this study. The eligible participants completed informed consent procedures, which had been reviewed and approved by the university’s research ethics board.

We conducted power analysis by using G*Power. To detect a medium effect (f = 0.25) in a repeated measures ANOVA (with 7 waves of measures) with 90% power at an alpha level of 0.05, a sample size of 22 participants (11 per group) was needed. With 52 participants (17 in intervention and 35 in control), we had sufficient power to detect the effect of the intervention.

Before allocation, the investigators gave instructions to the participants through WeChat regarding how to record their total time of PA, including moderate-intensity and vigorous-intensity PA, and how to send it to the investigators every day in the roll-in week. Their baseline daily physical activity duration (DPAD) was calculated as the 7-day average.
After allocation but before the intervention started, each participant was informed of his or her baseline DPAD and was asked to set his or her goal of DPAD according to the gap between the total PA duration in the roll-in week and the recommended PA level by the WHO [5] and then send his or her goals to the investigators.
The recommended standard for the goal setting is shown in Table 1.
All the interactions between the investigators and participants were through WeChat except for one face-to-face kick-off meeting organized for the intervention group.

Evidence has shown that sharing information about the target behavior in the intervention with social contact and acting in groups rather than individually could raise subjects’ involvement with the intervention [34]. Peer support, accountability, competition, and reward have also been proven to enhance social incentives [35]. Thus, we embedded these features into the intervention to stimulate enduring engagement:

Points, ranking, punishments, and rewards are typical modes of gamification and have been confirmed as effective techniques to improve the interest, incentive, and purposefulness of non-game programs [27,32]. Several studies have indicated their potential in stimulating engagement in PA behavior change, especially for youths [31,42]. Thus, the intervention was enriched by including gamification features as follows.

The DPAD was recorded on a spreadsheet embedded in WeChat. The participants input their DPAD on the spreadsheet and then posted it to their WeChat groups, so that their PA change over time was monitored by themselves and their teammates. The weekly PA duration for each week was also calculated.

The questionnaire developed by Ajzen [47] was utilized to measure the four cognitive TPB constructs: attitude, subjective norms, perceived behavioral control, and behavioral intention. The participants’ own DPAD goal was defined as the target behavior.
Attitude was measured with 3 items (Cronbach alpha = 0.872), on a 7-point bipolar adjective scale, the choices were prefaced with the statement ‘‘For me, my DPAD goal would be…” followed by 3 items (bad–good, unpleasant–pleasant, and worthless–valuable), scored from 1 to 7.

The subjects were required to complete the IPAQ and TPB questionnaires through an electronic link sent by the investigators on WeChat privately. They were not aware of each other’s responses.

The data analysis was conducted with SPSS version 22. Missing values of demographics, TPB constructs, and physical activity measured by the questionnaire were deleted listwise, while missing values of DAPD were filled using multiple imputation in SPSS. Of the 2548 data of DPAD from the 52 participants during the 49-day measures, there were 5 missing values (about 0.20%) from 1 subject in the intervention group and 2 subjects in the control group. A total of 5 imputations were conducted using the following predictors of missing data: baseline DPAD, study group, calendar month fixed effects, week in the study, and a binary variable indicating the weekday or weekend. The imputed results were consolidated into 1 result by calculating the mean, using standard rules by Rubin [48]. Quantitative variables including age, body mass index (BMI), TPB constructs, PA, and DPAD were tested for normality and homogeneity of variance, and descriptive analyses for all the variables were conducted. The effect of the intervention on PA and related TPB constructs was tested using independent samples Mann–Whitney U test. Trends of DPAD for each week in the 2 groups were analyzed through repeated measures ANOVA. Prediction of the TPB constructs on PA was confirmed through ordinary least squares regression analyses with path analysis. The statistical significance was set at p <0.05.

3.2. Intervention Effects on the Baseline (T0) to Post-Test (T1) Changes in the TPB Constructs.

3.4. Prediction of PA by TPB Constructs

We creatively designed a WeChat-based intervention that integrated gamification and social incentives to increase PA and conducted a controlled trial to demonstrate its effectiveness on the promotion of PA behavior, as well as related TPB constructs. This type of intervention implemented through social networking services provided an easy, effective, and inexpensive mode for improving undergraduates’ compliance and commitment, as well as passion for increasing PA, thus making it possible to maintain long-term behavior change. The researchers did not need to expend much effort in the intervention, as it helped the participants develop intrinsic motivation, and the mechanism could be run by the participants themselves. So, the scope of this study not only applied to the intervention period, but also aimed at helping to form a healthy habit to obtain lifelong benefits. Moreover, this study also gave light to the application of WeChat in behavior change programs, offering a reference for making adequate use of this leading, popular, and free instrument.
On the other hand, this study had several limitations. First, the data of PA behavior were measured through self-reported subjective measures, and the accuracy remains uncertain. However, as a relatively convenient, cheap, and operable approach to measuring PA, self-reported scales have been widely utilized in many studies and have obtained satisfactory reliability in reflecting accurate PA behavior [15,20,56]. The past-day recall of DPAD has shown applicability in health behavior surveillance studies [57,58], and the past-day recall questionnaire has provided acceptable agreement with PA time measured by device [58]. The single-item measure of DPAD used in this study was found to perform as well as other short physical activity tools in terms of reliability and validity [55,59]. Nevertheless, it is possible that the subjects tended to increase their self-reported DAPD over time. Future research could utilize objective measures to more definitely evaluate the intervention effect. Second, the intervention period in this study was relatively short and did not include a follow-up. Thus, the long-term effect of the intervention remains unclear. However, there is evidence that even a 6-week intervention could obtain significant changes in TPB constructs and PA behavior [39,42]. A recent longitudinal study confirmed that a 6-week PA intervention was enough to improve human gut microbiota, independent of diet, which indicated that even 6 weeks of increase in PA could induce considerable health benefits [60]. Future research needs to include follow-up observations to study whether the positive effects can be sustained over time. Third, the subjects were not completely independent, because the subjects in each condition were able to interact, and the intervention design required social interaction within the teams. More granular data should be collected to address this problem. Last but not least, because we integrated designs of gamification and social incentives into the intervention, the effect of gamification and social incentives could not be disentangled. Future research could include separate intervention groups with/without gamification and with/without social incentives to identify the distinct effect of gamification and social incentives.

In conclusion, the WeChat-based intervention integrating features of gamification and social incentives in this study was effective at increasing self-reported physical activity, as well as related TPB constructs among undergraduates in China. Our findings suggest that gamification and social incentives may offer a promising approach to promoting health behavior change in young people.

The authors would like to thank Jing Zhang, Kun Qian, and Wei Dong at Shanghai Jiao Tong University for their assistance in conducting the study. 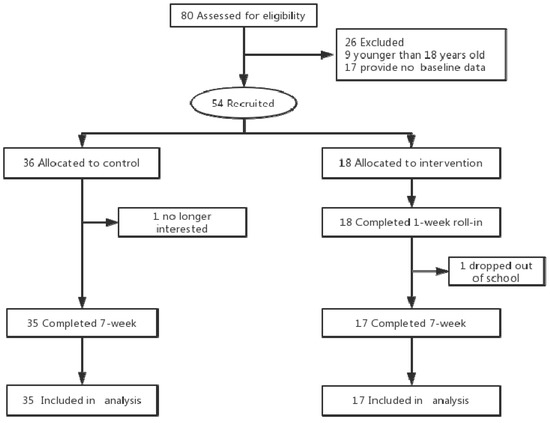