Education Policy for Migrant Children in Thailand and How It Really Happens; A Case Study of Ranong Province, Thailand
Next Article in Special Issue

School Green Space and Its Impact on Academic Performance: A Systematic Literature Review

Background: Scholars and policymakers have criticized public education in developed countries for perpetuating health and income disparities. Several studies have examined the ties between green space and academic performance, hypothesizing that green space can foster performance, and, over time, help reduce such disparities. Although numerous reviews have analyzed the link between nature and child health, none have focused on academic achievement. Methods: We identified 13 peer-reviewed articles that examined associations between academic outcomes, types of green spaces, and distances in which green spaces were measured around schools. Results: Of the 122 findings reported in the 13 articles, 64% were non-significant, 8% were significant and negative, and 28% were significant and positive. Positive findings were limited to greenness, tree cover, and green land cover at distances up to 2000 m around schools. End-of-semester grades and college preparatory exams showed greater shares of positive associations than math or reading test scores. Most findings regarding writing test scores were non-significant, and moderation effects of socioeconomic status, gender, and urbanization showed mixed results. Conclusions: The extant literature on green space and academic performance is small, shows mixed results, and mostly includes articles using observational, school-level research designs. Regardless, there is sufficient evidence to warrant further research on this topic, including effect moderation and mechanistic pathways. View Full-Text
Keywords: green space; nature; academic performance; academic achievement; education; schools; test scores green space; nature; academic performance; academic achievement; education; schools; test scores
►▼ Show Figures 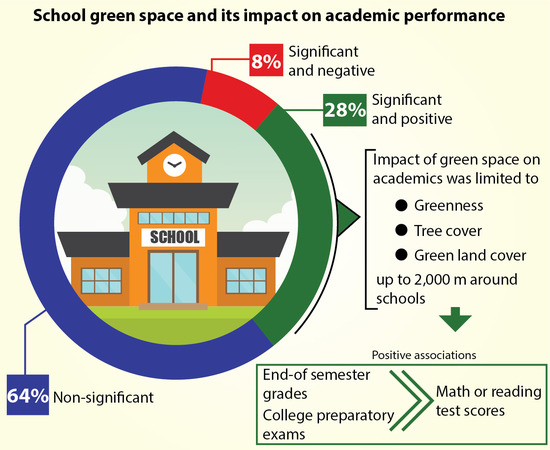