Distributional Environmental Injustices for a Minority Group without Minority Status: Arab Americans and Residential Exposure to Carcinogenic Air Pollution in the US
Previous Article in Journal

Standard Expected Years of Life Lost Due to Malignant Neoplasms in Poland, 2000–2014

The early 1970s in Western Europe marked the beginning of the so-called “cardiovascular revolution”, which was a sequence of changes regarding health [1]. In Poland, similar changes started to be observed only after 1990 [2]. The process of increasing incidence of cardiovascular diseases, which had started at the beginning of the 1960s, was then stopped and mortality due to the above cause between 1991 and 2010 in Poland decreased from 499 to 271 per 100,000 population [3]. Those changes were one of causes of lifespan extension. In 1991–2010, the lifespan increased by 6.2 years in males and by 5.5 years in females. A consequence of the health progress, observed in the last two decades, was a change in the epidemiological model of morbidity and mortality in Poland [4,5]. Currently, similar to Western European countries, malignant neoplasms are becoming the most prominent reason for premature mortality, particularly in people below the age of 65 [6,7]. Female mortality due to cancers is twice as high as that caused by cardiovascular diseases. World Health Organisation (WHO) experts believe that one third of cancers could be avoided, one third could be successfully treated and, in one third of cases, the quality of life of cancer patients could be improved [8,9].
The modification of risk factors plays the greatest role in primary cancer prevention. Doll and Peto estimated in their study the proportion of deaths attributed to the following risk factors in the USA: tobacco (25–40%), alcohol (2–4%), diet (10–70%), sexual and reproductive behaviour (1–13%), occupational exposure (2–8%) and environmental pollution (1–5%) [10]. Another component of primary prevention is screening for early diagnosis of cervical cancer, breast cancer and colorectal cancer. Hepatitis B virus (HBV) vaccine and human papillomavirus (HPV) vaccine play an important role in cancer prevention as well [11].
More than 100 various oncological diseases are called malignant neoplasms. In males, lung, colorectal and prostate cancer constitute almost 50% of cancer-related mortality. With regards to females, breast, lung, stomach, cervical and ovarian cancer is responsible for 60% of deaths [12]. Lung cancer in males as well as lung and breast cancer in females greatly shape trends in cancer diseases in the Polish population [13]. Prognosticating a cancer risk is highly important for prophylactic and therapeutic purposes. An analysis of historical trends and prognosis, even short-term, allows evaluating the change in risk factors and the effectiveness of an intervention. This method also enables evaluating the effectiveness of screening studies. A comparison of the short-term cancer-related mortality prognosis with real rate values can be an invaluable asset in evaluation of screening programmes [14].
Currently, cancer is the second most common cause of death in Poland and Europe, responsible for 27.6% of deaths in Poland, 26.5% of deaths in European Union countries and almost 20% of deaths in the WHO European Region [15]. Over 10 years, the number of cancer-related deaths has increased by 6.3% and in 2011 it contributed to death of 1,281,000 inhabitants of 28 EU countries. Overall, 37.1% of deaths in the population below 65 years of age were attributed to cancer. The highest percentage was noted in Holland (48.0%), whereas the lowest in Finland (28.4%). Since the mid-1980s, the incidence of neoplasm has increased by 32% and mortality due to the above cause decreased by 10% [16,17].
The number of lost years of life in Poland due to premature mortality or disability, caused by neoplastic diseases, is one of the highest in Europe [18]. The standardised DALY measure for neoplastic diseases in Poland in 2013 was 1822 per 100,000. It was the highest in Hungary (2167). In France it was 1623, in Germany it was 1350, in Greece it was 1255 and was the lowest in Cyprus (794).
A direct result of premature mortality is the number of years of life lost by the Polish population. To evaluate health of a particular population, authors of foreign studies on epidemiology are more and more frequently using measures which express premature mortality in units of time lost. Many of them claim that the number of years of lost life is a more reliable measure of mortality than other, commonly used mortality rates, since it more effectively points out social and economic outcome of this phenomenon [19,20,21]. Measures of years of life lost enable evaluating progress in treating diseases, because they include information on a decrease in the number of deaths and extended survivability.
There are different approaches to methods of calculation of these measures, depending on the adopted life span limit. According to the PYLL (Potential Years of Life Lost) index, the life span limit ranges from 60 to 85 years. The life span limit is often controversial, which is a disadvantage of the index. Another disadvantage is ignoring benefits, arising out of health interventions targeted at the oldest social groups. Thus, the PYLL index, being less reliable, is not considered in analyses. A better measure is the so-called PEYLL (Period Expected Years of Life Lost) index, according to which a local period of expected life span in each age is considered the life span limit. It does not include arbitrarily adopted age, above which deaths are not considered for the purpose of calculating the burden. However, the PEYLL index cannot be used to make comparisons over time or to distinguish between societies, characterised with different expected life span, which is a negative aspect of the index. The SEYLL (Standard Expected Years of Life Lost) index does not have such a negative feature. Here, expected life span is adopted in order to calculate the number of years of life lost on the basis of an ideal standard [22].
The aim of the study was to evaluate mortality trends due to malignant neoplasm during the fifteen-year period, 2000–2014, with the application of standard expected years of life lost.

The research project was granted an approval of the Bioethics Committee of the Medical University of Lodz on 22 May 2012 No. RNN/422/12/KB.
The study material was a database including 5,601,568 death certificates of all inhabitants of Poland who died during the period 2000–2014. Of this number, 1,367,364 people died of malignant cancer. The data were provided by the Department of Information of the Polish Central Statistical Office. The procedure of coding causes of death in Poland is performed in a similar to the one carried out in the majority of countries in the world, based on the so-called primary cause of death, or the disease which triggered a pathological process, leading to death.
The authors calculated standardised death rates (SDR). The standardisation procedure was performed with the use of direct method, in compliance with the European Standard Population, updated in 2012 [23].
Years of life lost were counted and analysed by the method described by Murray and Lopez in Global Burden of Disease (GBD) [24]. The SEYLL index (Standard Expected Years of Life Lost) is used to calculate the number of years of life lost by the studied population in comparison to the years lost by the referential (standard) population.
There are some methods of calculating lost years of life and the main difference between them is a point of reference, i.e., the level of mortality which is considered “ideal”. In the Global Burden of Disease (GBD) study 2010, WHO experts recommend using life tables, based on the lowest noted death rate for each age group, in countries with population above 5 million [25].
In this study, the SEYLL index was calculated according to the following formula: where is life expectancy, based on GBD 2010 life tables, dx is number of deaths at age x, x is age at which the person died and l is last age which the population reaches.
The authors also calculated SEYLLp (per living person) and SEYLLd (per death) indices, where the SEYLL absolute number corresponded to the number of inhabitants and the number of people who died due to the analysed cause [26].
Death causes were coded according to the International Statistical Classification of Diseases and Health Related Problems—Tenth Revision—ICD-10. The study analysis included malignant tumours (C00–C97), such as: bladder cancer (C67), brain cancer (C70–C72), breast cancer (C50), cervical cancer (C53), colorectal cancer (C18–C21), leukaemia (C95), liver cancer (C22), lung cancer (C33,C34), ovarian cancer (C56), pancreatic cancer (C25), prostate cancer (C61) and stomach cancer (C16).
The analysis of time trends was carried out with joinpoint models and Joinpoint Regression program, a statistical software package developed by the U.S. National Cancer Institute for the Surveillance, Epidemiology and End Results Program [27]. This method is an advanced version of linear regression, where time trend is expressed with a broken line, which is a sequence of segments joined in joinpoints. At these points, the change of the value is statistically significant (p < 0.05). We also calculated annual percentage change (APC) for each segment of broken lines and average annual percentage change (AAPC) for a full range of analysed years with corresponding 95% confidence intervals (CI).

The analysis of changes in the number of years of life lost due to neoplastic diseases affecting inhabitants of Poland, conducted over 15 years, points out high values of the SEYLLp index and negative trends regarding lung cancer in females, prostate cancer in males and colorectal cancer in both males and females. Since 2010, the number of years of life lost due to breast cancer in females has also been increasing. We could avoid such a great loss by including more inhabitants of Poland in screening tests, aiming at detecting those malignant neoplasms whose incidence is closely associated with modifiable risk factors. Besides, there is a need to implement programmes on health promotion, including smoking cessation, particularly targeted at young women. 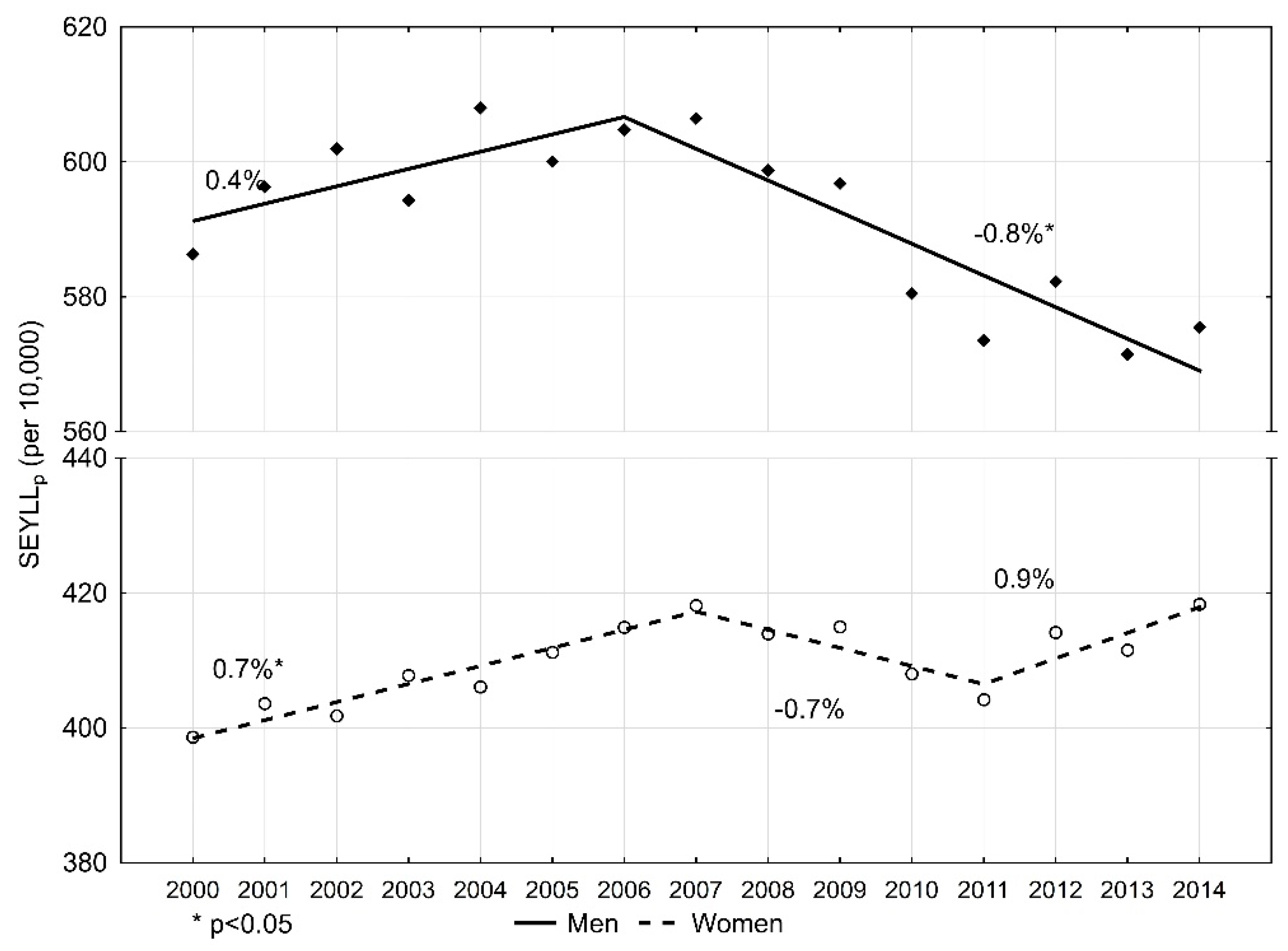 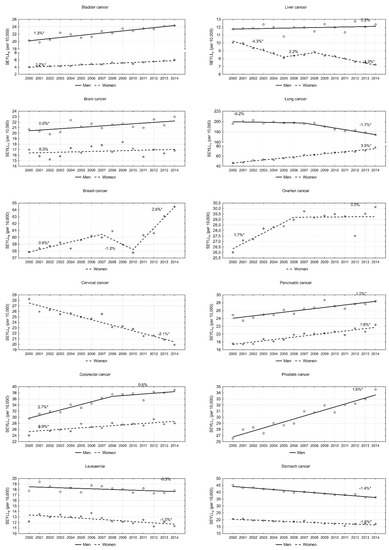