Prevalence, Use Behaviors, and Preferences among Users of Heated Tobacco Products: Findings from the 2018 ITC Japan Survey

Use of Heated Tobacco Products within Indoor Spaces: Findings from the 2018 ITC Japan Survey

Since their introduction in 2014 [1], heated tobacco products (HTPs) have become increasingly popular in Japan. From 2015 to 2017, an estimated twelve-fold increase in past-30-day use of IQOS (a leading HTP brand) was observed among the Japanese general population, equating to millions of users nationwide [1]. As HTP use becomes more commonplace, it is important to examine potential health risks to non-users that may occur through secondhand exposure. While extensive research has implicated secondhand exposure to combustible cigarettes (CCs) as a cause of deleterious health effects [2,3], only a handful of independent studies have explored secondhand exposures to HTPs. These studies found that side-stream emissions from HTPs also contain many harmful constituents, and therefore may also present similar adverse health effects [4,5,6,7,8].
In an effort to protect bystanders from the harms of secondhand exposure, national smoke-free policies for indoor public spaces have been adopted by many countries [9]. In addition to improvement in health outcomes [10,11,12,13], the adoption of smoke-free policies has been tied to other public health benefits as well, such as lower consumption of CCs among smokers [14] and lower smoking initiation rates among youth [15]. Unlike other developed nations, Japan’s tobacco control policy has only recently incorporated a national smoke-free law in preparation for the upcoming 2020 Summer Olympic Games [16]. Upon enactment, this law will supposedly include restrictions on the use of HTPs within indoor public spaces.
As Japan’s new national smoke-free law will be fully enforced on April 1, 2020 [16], there is a need to provide baseline estimates of tobacco product use within indoor public spaces before the law is enacted. In addition to describing the prevalence of indoor HTP and CC use in Japan, this study aimed to examine whether (1) the use of HTPs is more common within indoor public spaces than the use of CCs and (2) dual HTP and CC users use HTPs within indoor public spaces to circumvent smoke-free policy.

We analyzed data from the International Tobacco Control (ITC) Japan Survey Wave 1, a web-based survey conducted from February to March 2018. Participants were sampled from an existing panel that is nationally representative of Japanese adults, which includes both tobacco product users and non-users, aged 20 years and older (n = 4684). The main analytic sample in this study was current tobacco users (n = 4069), defined as participants who either use HTP or CC at least monthly. Exclusive users of HTPs (n = 170) or CCs (n = 3210) were defined as participants who only use one of either product, while dual users (n = 689) use both HTPs and CCs. Thus, any HTP users (n = 859) were defined as participants who currently use HTP at least once a month (exclusive HTP users and dual users), and any cigarette smokers (n = 3899) were participants who smoke CCs at least once a month (exclusive smokers and dual users). Ethical clearance (ORE#31428) was received from the Office of Research Ethics University of Waterloo.

We presented the prevalence of HTP and CC use within indoor public spaces in weighted percentages and 95% confidence intervals (CI). Rao–Scott chi-square tests assessed the difference of use within indoor public spaces between HTPs and CCs. All statistical analyses were performed using ‘svy’ commands in Stata SE version 14.2 (StataCorp, College Station, TX, USA). Further details on the weighting strategy are provided in the ITC Japan Survey Technical Report (https://itcproject.org/files/JP1-1.5_Technical_Report_5June2019.pdf). We considered results statistically significant at p < 0.05 (two-tailed).

To the best of our knowledge, this is the first study that collectively examined population estimates of HTP and CC use within indoor public spaces. In Japan, while the prevalence of HTP use within indoor public spaces is considerable, it is much lower compared to indoor use of CC. While differences in prevalence partly explain these findings (smoking remains much more common than HTP use) [17], there is still a difference between HTP and CC indoor public use even when it is stratified according to each subgroup of users. This may be due to at least three factors. First, this is likely a function of the previous lenient national law, which only stipulated that the property owner take necessary measures (without any penalty provisions) to protect against secondhand exposure [18]. Indeed, a substantial portion of participants in this study reported ‘smoking is allowed only in some indoor areas’ or ‘no rules or restrictions’ for cigarette smoking rules within indoor public spaces. Second, the observed difference could in part be explained by a higher frequency of product use for cigarettes smokers than for HTP users in this study. Thus, although both HTP users and cigarette smokers use their respective products at least monthly, cigarette smokers have more opportunities to be smoking indoors. Lastly, perceived smoking norms have been shown to influence individual behavior [19,20]. As opposed to an immediate trend, it is likely that smoking in indoor public spaces throughout Japan became a normalized practice gradually over time. The same could be true of HTPs as they continue to gain popularity.
A previous study has noted the tobacco industry may use the claim that, since the tobacco is purportedly heated instead of burned, HTPs release no smoke and therefore can be excluded from indoor smoke-free policies [8]. At the time of survey, HTP use is allowed in smoke-free areas [21]. Of particular note is Japan Tobacco International’s Ploom TECH, which introduced a “No Smoking, Ploom TECH Only” concept to increase acceptance and normalize the use of Ploom TECH in indoor public spaces [22]. In principle, the new smoke-free law adopted in Japan will ban indoor smoking, however room designated for HTP use, akin to smoking room, in restaurants and bars is allowed as an exception [16]. It remains to be seen whether the new law will be enforced stringently enough to aid in lowering tobacco use within indoor public spaces. Future assessments studying the effect of the smoke-free law enactment on use of both CCs and HTPs within indoor public spaces will be needed to determine the impact of this new legislation.
Dual users also reported using CCs more commonly than using HTPs within indoor public spaces. Studies that explored dual use patterns between CCs and alternative tobacco products, such as electronic nicotine delivery systems and HTPs, have reported that alternative tobacco products can serve as a complementary source of nicotine among certain subsets of cigarette smokers [23,24,25]. In a regulatory environment that imposed smoke-free law, dual users may switch from CCs to alternative tobacco products to circumvent the smoke-free environment. Such an explanation might not be applicable in the context of Japan as the regulatory environment for smoke-free policies at the time of survey was lacking. In Japan, many regulations for smoke-free workplaces are voluntarily implemented especially by large companies [26].
There are several limitations to this study. First, there was variation in the time frame used to assessed use of HTPs (last 30 days for all indoor public spaces) and CCs (last sixmonths for workplace and last time for bar and restaurant) within indoor public spaces. Second, although systematic reviews have shown smoke-free policies are associated with subsequent changes in smoking behavior [27,28], no causal relationship between the absence of a smoke-free law and tobacco product use within indoor public spaces can be made from these data, due to the cross-sectional nature of this study. Lastly, while frequency of product use was described in this study, we were unable to examine frequency of product use within indoor spaces.

The 2018 ITC Japan Survey was supported by a grant from National Cancer Center and Research Development Fund (28-A-24), with additional support provided by Canadian Institutes of Health Research Foundation Grant (FDN-148477). G.T.F. was also supported by a Senior Investigator Award from the Ontario Institute for Cancer Research.

K.M.C. has received payment as a consultant to Pfizer, Inc., for service on an external advisory panel to assess ways to improve smoking cessation delivery in health care settings. K.M.C. also has served as paid expert witness in litigation filed against the tobacco industry. G.T.F. has served as an expert witness on behalf of governments in litigation involving the tobacco industry. M.L.G. has received a research grant from Pfizer and served as a member of scientific advisory board to Johnson & Johnson. All other authors have no conflicts of interest to declare. 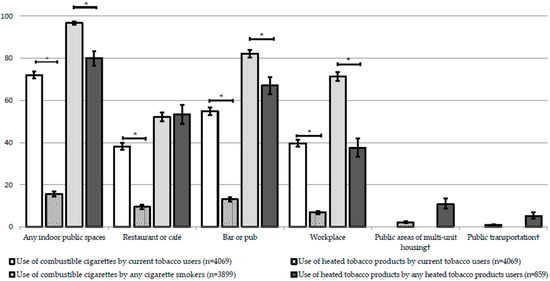