Emotional and Behavioral Problems Among 3- to 5-Year-Olds Left-Behind Children in Poor Rural Areas of Hunan Province: A Cross-Sectional Study
Next Article in Special Issue

This survey investigates the cross-sectional association between nighttime road, rail and aircraft noise exposure and the probability to be highly sleep disturbed (%HSD), as measured by self-report in postal and online questionnaires. As part of the Swiss SiRENE study, a total of 5592 survey participants in the entire country were selected based on a stratified random sample of their dwelling. Self-reported sleep disturbance was measured using an ICBEN-style 5-point verbal scale. The survey was carried out in four waves at different times of the year. Source-specific noise exposure was calculated for several façade points for each dwelling. After adjustment for potential confounders, all three noise sources showed a statistically significant association between the nighttime noise level LNight at the most exposed façade point and the probability to report high sleep disturbance, as determined by logistic regression. The association was strongest for aircraft noise and weakest for road traffic noise. We a priori studied the role of a range of effect modifiers, including the “eventfulness” of noise exposure, expressed as the Intermittency Ratio (IR) metric, bedroom window position, bedroom orientation towards the closest street, access to a quiet side of the dwelling, degree of urbanization, sleep timing factors (bedtime and sleep duration), sleep medication intake, survey season and night air temperature. While bedroom orientation exhibited a strong moderating effect, with an Leq-equivalent of nearly 20 dB if the bedroom faces away from the nearest street, the LNight-%HSD associations were not affected by bedroom window position, sleep timing factors, survey season, or temperature. View Full-Text
Keywords: noise exposure; sleep disturbance; exposure-effect relationship; traffic noise; noise effects; road traffic noise; railway noise; aircraft noise noise exposure; sleep disturbance; exposure-effect relationship; traffic noise; noise effects; road traffic noise; railway noise; aircraft noise
►▼ Show Figures 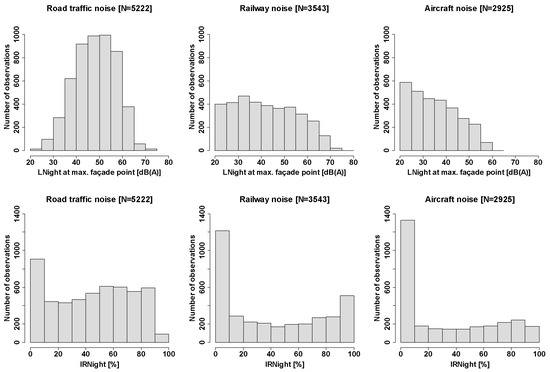