Being Conscious of Water Intake Positively Associated with Sufficient Non-Alcohol Drink Intake Regardless of Seasons and Reasons in Healthy Japanese; the KOBE Study: A Cross Sectional Study

In recent years, the prevalence of obesity and dyslipidemia has increased rapidly, which causes decreased quality of life and increased mortality due to their roles as important risk factors of cardiovascular and cerebrovascular diseases [1]. Dyslipidemia, characterized by elevated levels of triglyceride (TG) and low-density lipoprotein cholesterol (LDL-C) and decreased levels of high-density lipoprotein cholesterol (HDL-C), was once considered an adult disease, but with the increasing prevalence of childhood obesity, it is becoming more and more common in children and adolescents. It is generally believed that obesity and dyslipidemia are related to heredity, high calorie food intake and less physical activity, etc.
Epidemiological studies have shown that fructose intake is increasing among people, especially in children and adolescents [2,3]. High fructose consumption, even in the absence of obesity, can cause serious health problems, such as liver fat accumulation, dyslipidemia and nonalcoholic fatty liver disease (NAFLD) [4,5], which may be related to increased hepatic de novo lipogenesis (DNL), hepatic endoplasmic reticulum stress and increased expression of lipogenic genes [6,7]. Bisphenol A (BPA), as one of the most produced endocrine disrupting chemicals (EDCs), mainly used in the manufacture of plastics and epoxy resins [8]. BPA can increase fatty acid influx from adipose tissue into the liver and endogenous fatty acid synthesis, which in turn leads to the accumulation of TG in the liver [9]. Increasing evidence has shown that BPA exposure may increase the risk of obesity, insulin resistance and dyslipidemia [10,11]. In addition, the sugar-sweetened beverages (SSBs) preferred by children and adolescents in daily life, contain both fructose and BPA. A report showed that the average concentration of BPA in SSBs was 1.0 ng/mL, while it was 40.3 ng/g in canned foods [12]. In SSBs, fructose constituted 60.6% ± 2.7% of sugar content [13]. It is not clear whether combined exposure to fructose and BPA can aggravate abnormal lipid metabolism, because previous studies have shown that abnormal lipid metabolism can be caused by fructose or BPA.
The liver is the most important organ regulating lipid metabolism. Acetyl-CoA carboxylase 1 (ACC1) and fatty acid synthase (FAS) are the key enzymes to catalyze lipogenesis, while adipose triglyceride lipase (ATGL) and hormone sensitive lipase (HSL) are the key enzymes to catalyze lipolysis. Sterol regulatory element binding protein 1 (SREBP1) is an important transcription factor that regulates many types of key lipogenic genes encoding enzymes, such as ACC1 and FAS, which are involved in TG synthesis and lipid accumulation [14]. Studies have shown that the mechanism of hepatic lipid accumulation induced by fructose or BPA is related to its up-regulation of lipogenic gene expression, such as SREBP1 and FAS [15,16]. However, to our knowledge, the effect of combined exposure to fructose and BPA on the expression of key genes or proteins that regulate lipid metabolism in the liver has not been reported. Hence, we hypothesized that combined exposure to fructose and BPA may exacerbate abnormal lipid metabolism, and its mechanism may be associated with severe interference with the expression of key genes or proteins regulating lipid mechanism.
Studies have shown that the adverse health effects of excessive fructose or BPA exposure are associated with the activation of inflammatory response [17,18]. Inflammation is the inducement of many chronic diseases, such as diabetes, dyslipidemia, cardiovascular and cerebrovascular diseases [19]. Whether combined exposure to fructose and BPA has a synergistic effect on inflammatory response is unknown. In this study, the nuclear factor κB (NF-κB), as a key inflammatory regulator, toll-like receptor-4 (TLR4), serum interleukin-17 (IL-17) and tumor necrosis factor-α (TNF-α) levels were also measured to verify the more serious adverse effects of combined exposure to fructose and BPA on health.

Fifty male Wistar rats aged 3 weeks (80–110 g) were received from the Center for Experimental Animals at China Medical University (Shenyang, China) under National Animal Use License number SCXK-LN 2013-0007. All experiments and surgical procedures were approved by the Animal Use and Care Committee at China Medical University, which complies with the National Institutes of Health Guide for the Care and Use of Laboratory Animals. The rats were housed in a room under controlled temperature (22 ± 2 °C) and relative humidity (55 ± 5%) with a normal 12-h light/dark cycle. Rats were fed standard chow and water ad libitum one week for acclimatization before the experiment. After the adaptation period, all rats were kept in a single cage and randomly allocated into five groups according to body weight (n= 10/group): control group, 13% fructose group, 20% fructose group, 1 µg/mL BPA group, and 13% fructose + 1 µg/mL BPA group (combined exposure group). Rats were exposed to BPA (99% pure; Sigma-Aldrich, St. Louis, MO, USA) and/or fructose (Shandong Xiwang Sugar, Zibo, China) (400 kcal/100 g) by drinking water alone or in combination and given standard chow (23.7 g protein, 5 g fat and 46.12 g carbohydrate/100 g) for eight weeks.
Food and water intake per cage were measured daily, and body weight was determined once a week. Protein and energy intake were calculated according to the amount of water and/or food consumed. At the end of the study, animals were sacrificed after overnight fasting. Blood was collected from caudal vein, and fasting blood glucose (FBG) levels were measured by using a glucometer (Sinocare, Changsha, China). The blood samples collected from aorta abdominalis were centrifuged (3500 rpm, 4 °C, 5 min) to separate the serum and then stored at −80 °C for use. Liver and visceral fat (epididymal and perirenal fat tissue) were collected and weighed. The visceral fat coefficient or liver coefficient was calculated as visceral fat weight or liver weight/body weight × 100%. Part of the liver was either frozen at −80 °C for next analysis or fixed in 4% paraformaldehyde for further histopathological analysis.

Hepatic pathological changes were observed after hematoxylin and eosin (H&E) staining. Liver tissue were fixed in 10% buffered formalin, dehydrated and embedded in wax. Serial sections of the tissue were taken in an automated microtome at a thickness of 5 µm and stained with H&E reagent. Photomicrographs were captured under a microscope (Leica Microsystems, Werzlar, Germany). The photos were taken a final magnification of 200 ×.

All analyses were performed with the SPSS 21.0 software (SPSS, Inc., Chicago, IL, USA). Data were expressed as mean ± standard deviations (SD). Differences between groups were analyzed by one-way analysis of variance (ANOVA). For all analyses, p < 0.05 was considered statistically significant.

3.2. Effects of Fructose and/or BPA Exposure on Energy Intake

3.3. Effects of Fructose and/or BPA Exposure on Visceral Fat and Liver Index

The weight of visceral fat and liver were measured and the index was computed. The visceral fat coefficient in the experimental groups was higher than that in the control group. There was no significant difference in liver index between fructose and/or 1 µg/mL BPA exposure groups and controls (Figure 1).

3.4. Effects of Fructose and/or BPA Exposure on Serum Biochemistry

The morphology of liver tissue showed a normal hepatocyte structure with no degeneration and necrosis of cells after H&E staining in control group. However, the hepatocytes were condensed, and the cytoplasm was diffused, and more lipid droplets were clearly visualized in the liver tissue in fructose and/or BPA exposure groups. In addition, with the increase of fructose concentration, more and more lipid droplets were seen in the combined exposure group than the 13% fructose group and 1 µg/mL BPA group, indicating that the combined exposure group had more fat accumulation in the liver. Liver histomorphology showed that there were significant differences in the number of lipid droplets among the groups (Figure 3).

3.6. Effects of Fructose and/or BPA Exposure on the Expression of Genes Involved in Lipid Metabolism in Liver

3.7. Effects of Fructose and/or BPA Exposure on the Expression of Proteins Involved in Lipid Metabolism and Inflammatory Response in Liver

In conclusion, our study showed that there were synergistic effects of combined exposure to fructose and BPA on abnormal lipid metabolism, which were associated with increasing lipogenic enzymes, decreasing lipolytic enzymes, and activating inflammatory response in liver of developmental male rats. Therefore, combined exposure to fructose and BPA could exacerbate abnormal lipid metabolism and lead to more fat accumulation in liver, compared with fructose or BPA exposure alone. 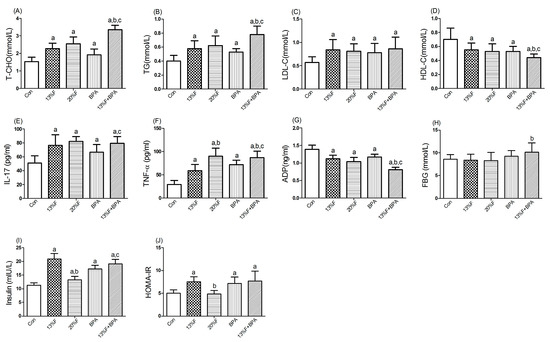 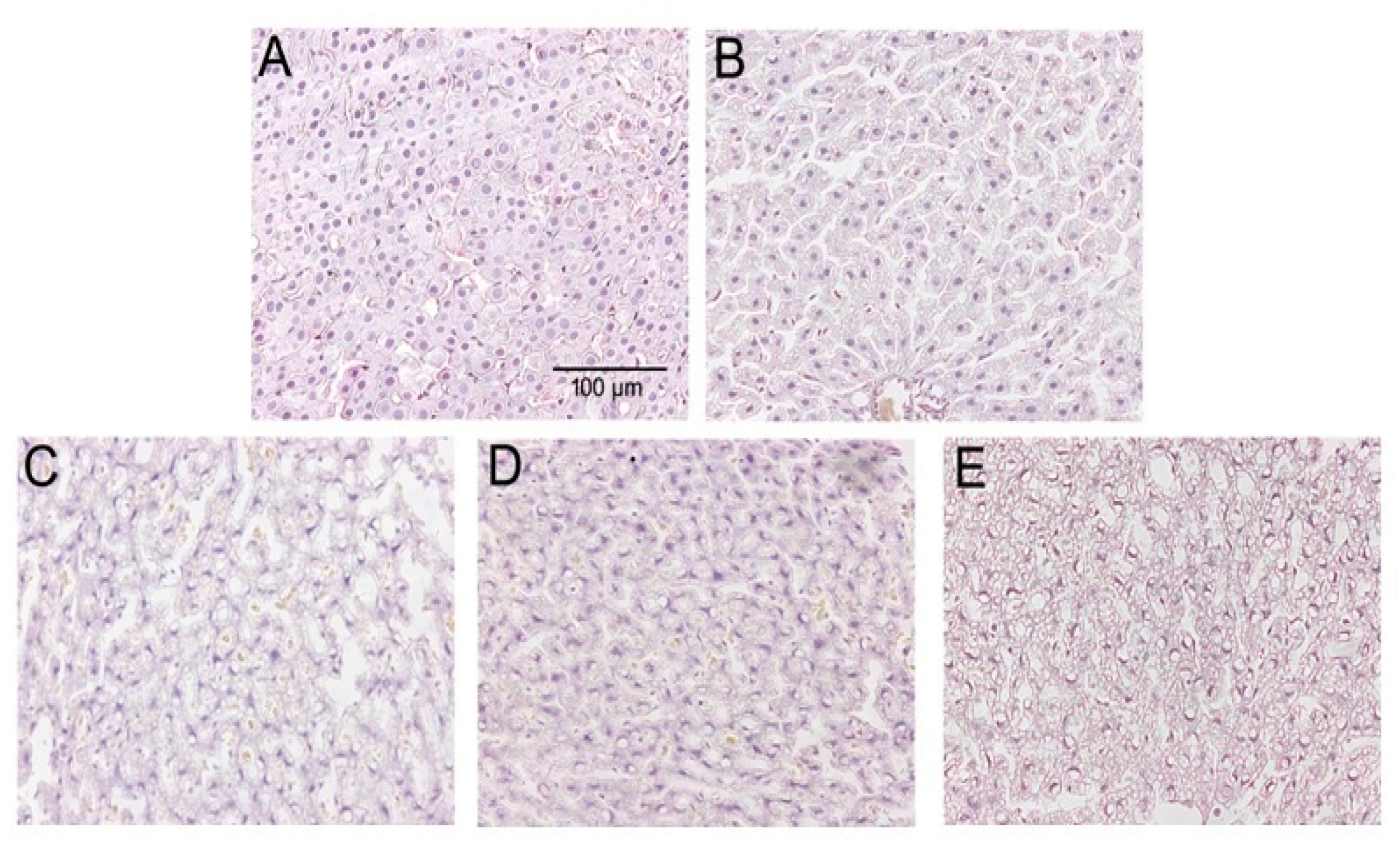 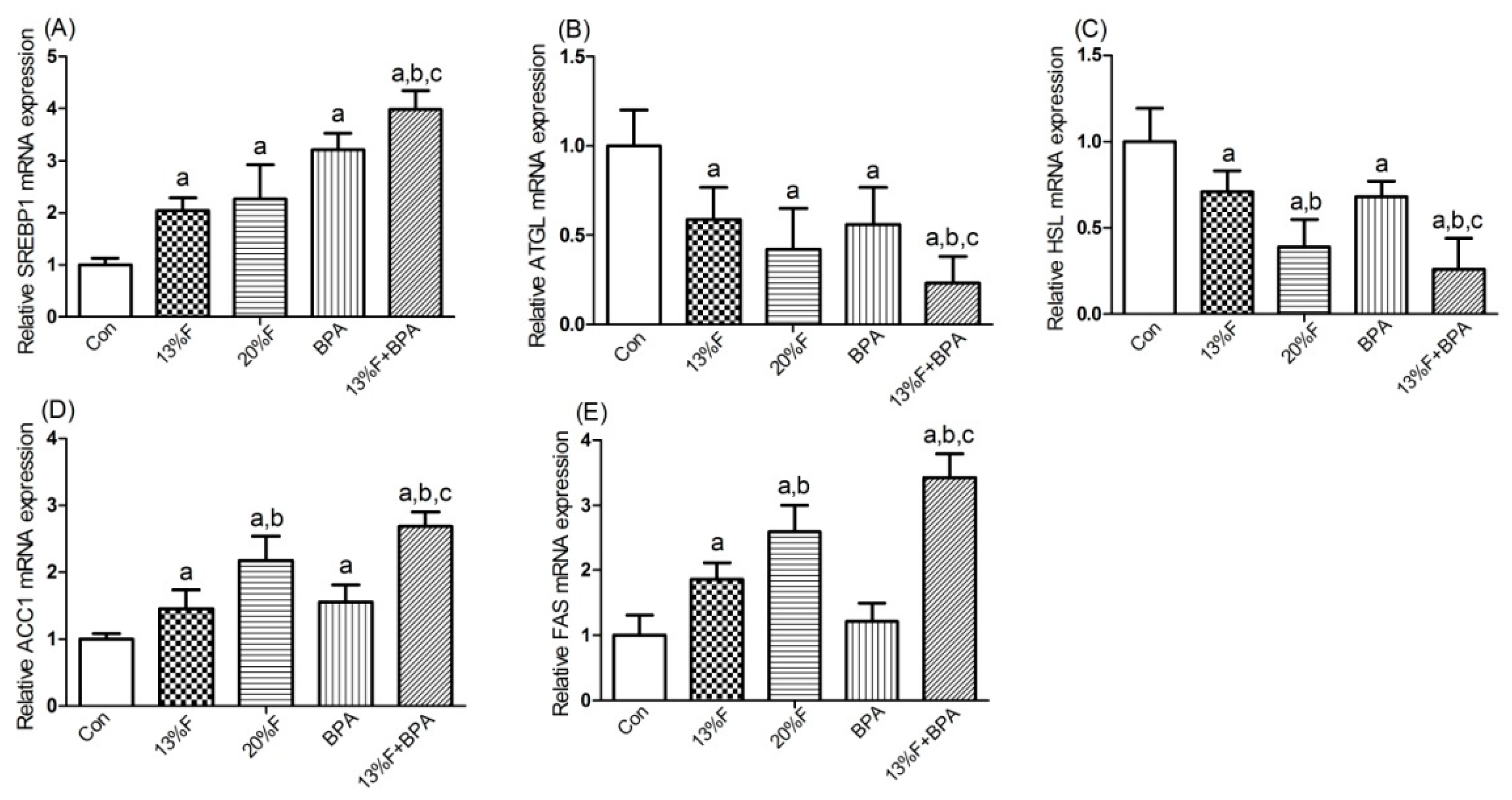