Barriers and Facilitators for the Implementation and Evaluation of Community-Based Interventions to Promote Physical Activity and Healthy Diet: A Mixed Methods Study in Argentina
Previous Article in Journal

Are Sedentary Behaviors Associated with Sleep Duration? A Cross-Sectional Case from Croatia

This cross-sectional study was based on a sample of university students from the city of Zagreb. Detailed procedure and sample collection are reported elsewhere [16,18,19]. In brief, we randomly selected eight out of thirty-three faculties from the University of Zagreb in 2017 at the first stage. At the second stage, we contacted a teacher at each faculty to help us with conducting the study. Finally, out of 2320 students that were approached, 2100 of them (90.5%) provided full data and were included in further analyses. All the analyses and procedures were anonymous and in accordance with the Declaration of Helsinki. The Institutional Review Board of the Faculty of Kinesiology (Ethics Code No: 16/2017) approved the study. Also, all participants gave their written informed consent for participation in the study and have agreed to have their data used for scientific purposes.

Basic descriptive statistics of the participants are presented as frequencies (N) and percentages (%). First, hours and minutes of sedentary behaviors were converted to minutes. Next, a continuous variable for each domain (screen-time, work and leisure-time sedentary behaviors) was used to categorize the participants into quartiles. Differences between ‘short’, ‘normal’ and ‘long’ sleep in terms of screen-time, leisure-time sedentary behavior, work and total sedentary behavior were calculated using chi-square test. Next, the association between each domain with sleep duration was calculated using generalized estimating equations with logistic regression analyses for faculty clustering. Two sets of logistic regressions were performed in order to calculate odds ratios (ORs) with 95% confident intervals (95% CIs) for both ‘short’ (<7 h) and ‘long’ (>9 h) sleep duration, as compared with a normal sleep duration (7–9 h). Each sedentary behavior domain was separately entered into the model to examine the association with ‘short’ and ‘long’ sleep duration. Additionally, each of eight models (2 sets of regression analyses × 4 domains of sedentary behaviors) was adjusted for sex, body-mass index, self-rated health, socio-economic status, smoking status, binge drinking, psychological distress and chronic disease/s. The interaction term between gender and sedentary behaviors was not statistically significant and we dropped the gender-stratified analyses. Significance was set up at α = 0.05. All the analyses were performed in Statistical Package for Social Sciences Software, V.22 (IBM, Armonk, NY, USA).

This study was approved by the Institutional Review Board of the Faculty of Kinesiology, University of Zagreb, Croatia under the number 16/2017.

The authors would like to thank all the teachers and students for their enthusiastic participation in this study.

All participants had given their written informed consent for participation in the study. 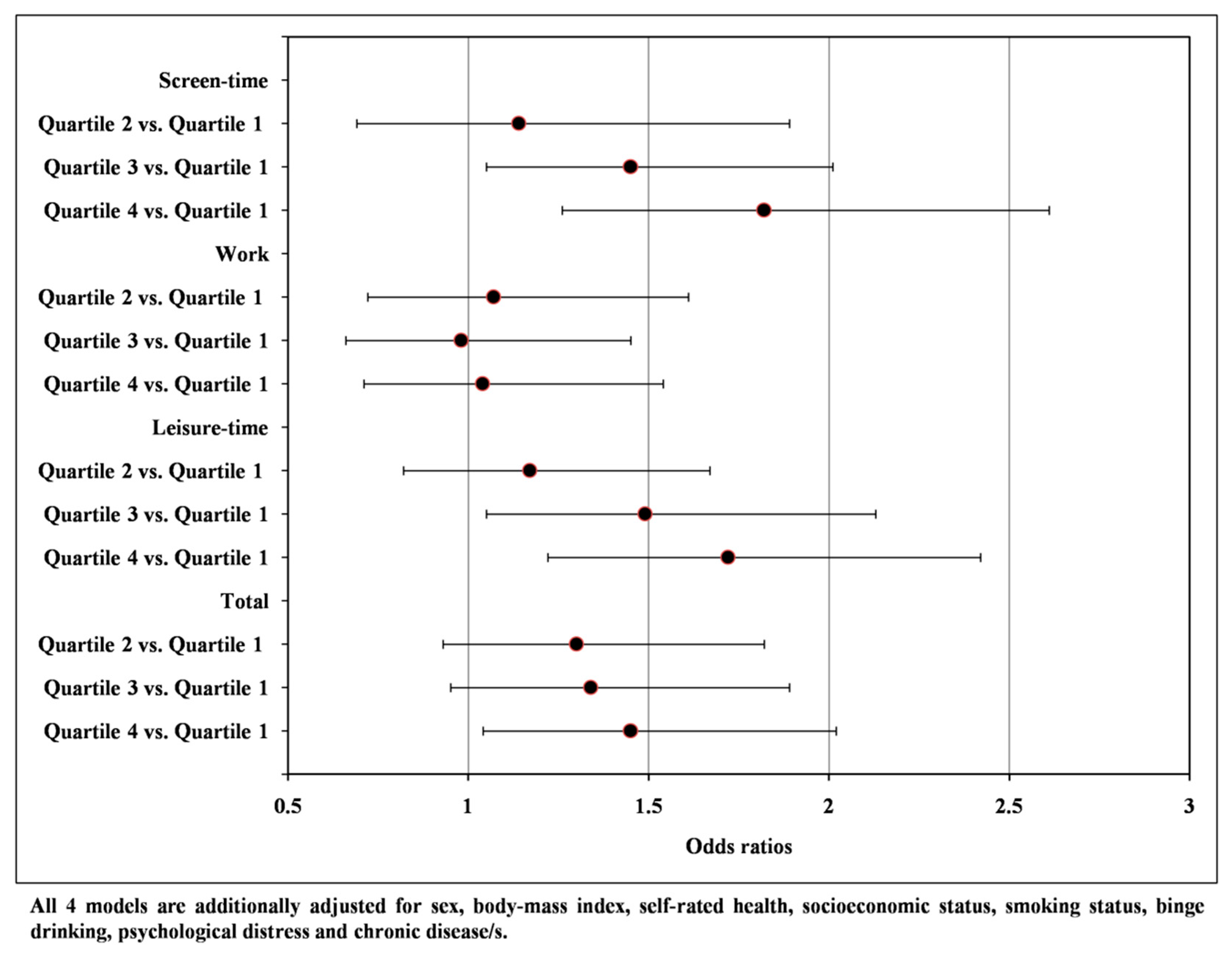