Sexually transmitted infections (STIs) are a major public health issue. Previous research shows the vulnerability of the homosexual and bisexual population, as well as the influence of economic, political, and cultural determinants. The aim of this study was to describe the socio-demographic healthcare profile and the main risk factors associated with STIs in homosexuals and bisexuals seen at the STI clinic in Granada (Spain) during the years 2000–2015. Infection prevalences were compared between the economic crisis period (2008–2014) and the rest of the years analysed. A cross-sectional observational and analytical study was conducted by reviewing 261 clinical records of individuals with suspected or present infection. Univariate, bivariate, and multivariate analyses were performed. 91.2% of the individuals were men, and 8.8% were women, with the mean age being 28.61 (SD = 9.35, Range = 17–74) years old. The prevailing sexual orientation identity was homosexual. 94.2% were single. The main reason for consultation was HIV. Differences in prevalence were found between crisis and non-crisis years (OR = 3.91; 95% CI = 1.73–9.19). In conclusion, their profile was that of a young, single man suspecting possible HIV infection. STI prevalence was significantly higher in the years of economic recession in comparison to the rest of the years. View Full-Text
Keywords: sexually transmitted diseases; risk factors; sexual and gender minorities sexually transmitted diseases; risk factors; sexual and gender minorities
►▼ Show Figures 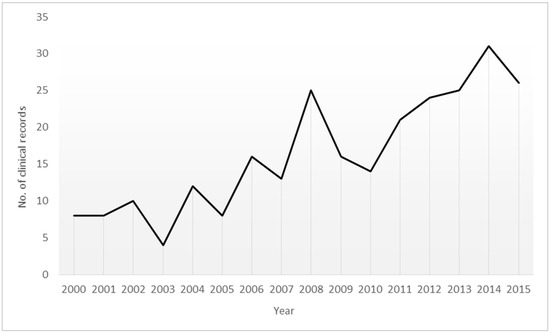