Maternal Residential Proximity to Major Roadways and the Risk of Childhood Acute Leukemia: A Population-Based Case-Control Study in Texas, 1995–2011

Associations between Indoor Air Pollution and Acute Respiratory Infections among Under-Five Children in Afghanistan: Do SES and Sex Matter?

Background: Low-income families often depend on fuels such as wood, coal, and animal dung for cooking. Such solid fuels are highly polluting and are a primary source of indoor air pollutants (IAP). We examined the association between solid fuel use (SFU) and acute respiratory infection (ARI) among under-five children in Afghanistan and the extent to which this association varies by socioeconomic status (SES) and gender. Materials and Methods: This is a cross-sectional study based on de-identified data from Afghanistan’s first standard Demographic and Health Survey (DHS) conducted in 2015. The sample consists of ever-married mothers with under-five children in the household (n = 27,565). We used mixed-effect Poisson regression models with robust error variance accounting for clustering to examine the associations between SFU and ARI among under-five children after adjusting for potential confounders. We also investigated potential effect modification by SES and sex. Additional analyses were conducted using an augmented measure of the exposure to IAP accounting for both SFU and the location of cooking/kitchen (High Exposure, Moderate, and No Exposure). Results: Around 70.2% of households reported SFU, whereas the prevalence of ARI was 17.6%. The prevalence of ARI was higher in children living in households with SFU compared to children living in households with no SFU (adjusted prevalence ratio (aPR) = 1.10; 95% CI: (0.98, 1.23)). We did not observe any effect modification by SES or child sex. When using the augmented measure of exposure incorporating the kitchen’s location, children highly exposed to IAP had a higher prevalence of ARI compared to unexposed children (aPR = 1.17; 95% CI: (1.03, 1.32)). SES modified this association with the strongest associations observed among children from the middle wealth quintile. Conclusion: The findings have significant policy implications and suggest that ARI risk in children may be reduced by ensuring there are clean cookstoves as well as clean fuels and acting on the socio-environmental pathways. View Full-Text
Keywords: socioeconomic status; indoor air pollution; acute respiratory infection; cooking fuel; under-five children socioeconomic status; indoor air pollution; acute respiratory infection; cooking fuel; under-five children
►▼ Show Figures 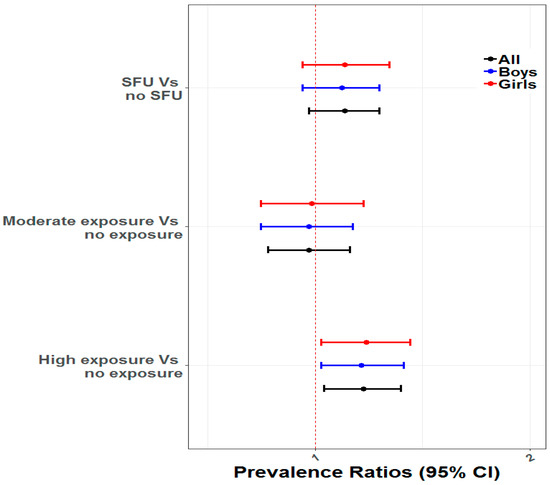