Microorganisms play an important role in animal nutrition, as they can be used as a source of food or feed. The aim of the study was to determine the nutritional elements and fatty acids contained in the biomass of methanotrophic bacteria. Four bacterial consortia composed of Methylocystis and Methylosinus originating from Sphagnum flexuosum (Sp1), S. magellanicum (Sp2), S. fallax II (Sp3), S. magellanicum IV (Sp4), and one composed of Methylocaldum, Methylosinus, and Methylocystis that originated from coalbed rock (Sk108) were studied. Nutritional elements were determined using the flame atomic absorption spectroscopy technique after a biomass mineralization stage, whereas the fatty acid content was analyzed with the GC technique. Additionally, the growth of biomass and dynamics of methane consumption were monitored. It was found that the methanotrophic biomass contained high concentrations of K, Mg, and Fe, i.e., approx. 9.6–19.1, 2.2–7.6, and 2.4–6.6 g kg−1, respectively. Consequently, the biomass can be viewed as an appropriate feed and/or feed additive for supplementation with macroelements and certain microelements. Moreover, all consortia demonstrated higher content of unsaturated acids than saturated ones. Thus, methanotrophic bacteria seem to be a good solution, in natural supplementation of animal diets. View Full-Text
Keywords: methanotrophic bacteria; nutritional values; feed ingredients; fatty acids methanotrophic bacteria; nutritional values; feed ingredients; fatty acids
►▼ Show Figures 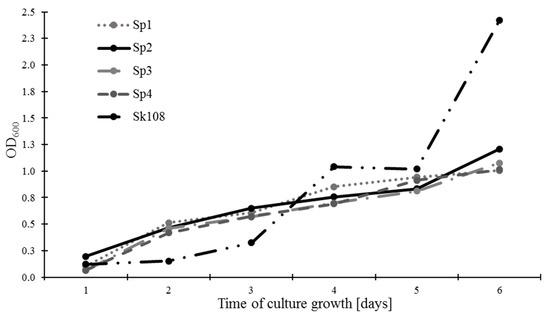