Motivation in the Athens Classic Marathon: The Role of Sex, Age, and Performance Level in Greek Recreational Marathon Runners
Next Article in Special Issue

There are scarce epidemiological studies on lung cancer mortality in areas exposed to asbestos in developing countries. We compared the rates and trends in mortality from lung cancer between 1980 and 2016 in a municipality that made extensive use of asbestos, Osasco, with rates from a referent municipality with lower asbestos exposure and with the rates for the State of São Paulo. We retrieved death records for cases of lung cancer (ICD-9 C162) (ICD-10 C33 C34) from 1980 to 2016 in adults aged 60 years and older. The join point regression and age-period-cohort models were fitted to the data. Among men, there was an increasing trend in lung cancer mortality in Osasco of 0.7% (CI: 0.1; 1.3) in contrast to a mean annual decrease for Sorocaba of -1.5% (CI: −2.4; −0.6) and a stable average trend for São Paulo of -0.1 (IC: −0.3; 0.1). Similar increasing trends were seen in women. The age-period-cohort model showed an increase in the risk of death from 1996 in Osasco and a reduction for Sorocaba and São Paulo State during the same period. Our results point to a need for a special monitoring regarding lung cancer incidence and mortality in areas with higher asbestos exposure.
Keywords: asbestos; lung neoplasms; mortality asbestos; lung neoplasms; mortality

Lung cancer is an important cause of death, with an estimated 1.8 million deaths worldwide in 2018, 82,000 of which occurred in South America and the Caribbean [1]. In 2016, the Brazilian National Cancer Institute (INCA) notified 27,000 deaths in the country [2].
Lung cancer is associated with tobacco smoking, socio-economic factors, air pollution, exposure to occupational carcinogenic agents, and ionizing radiation [3,4,5]. The increase in consumption of tobacco in the last century was accompanied by a significant increase in the incidence of pulmonary neoplasms. While the effect of occupational exposures is smaller than that of tobacco, it is superior to other classes of risk associated with lung cancer [6].
Asbestos, both chrysotile and the amphiboles, is associated with increased lung cancer risk [7]. Global estimates of annual deaths due to lung cancer related to asbestos exposure vary between 90,000–191,000 [8,9]. The fraction of lung cancer incidence attributable to asbestos exposure varies between 4 and 10% in most developed countries [10]. Asbestos exposure and smoking act synergistically to increase lung cancer risk [11].
Brazil is one of the largest worldwide producers, consumers, and exporters of chrysotile asbestos. Brazil’s use of chrysotile asbestos began in the late 1930s. Since the 1970s, asbestos consumption grew intensely and peaked at 1.5 to 1.6 kg/inhabitant between 1985 and 1991. In 2015, Brazilian asbestos production was responsible for 15.4% of the world fibre production [12]. Routine quantitative fibre measurement in workplaces that began in the 1980s was essentially limited to asbestos mining and asbestos-cement industries [13,14].
Since the mid-1980s, several countries have banned the use of the fibre in their territories because of consistent epidemiological evidence of its health risks [15]. In November 2017, the Brazilian Supreme Court rendered a decision prohibiting the extraction, industrialization, and commercialization of asbestos throughout the Brazilian territory [16]. However, the decision will not be implemented until the industry appeals to the court are judged.
In Brazil, there is a strong preponderance towards the consumption of chrysotile [14]. Amphibole asbestos was used in small quantities for asbestos-cement pipes until the beginning of the 1980s [13]. Likewise, this increased chrysotile consumption resulted in a higher ratio of lung cancer to mesotheliomas compared with countries that had relevant amphibole production or consumption [17]. Nevertheless, in Brazil, scarce epidemiological studies on the relationship between asbestos exposure and lung cancer mortality have been published.
The aim of this study is to compare the rates and trends in mortality from tracheal, bronchial, and lung cancer between 1980 and 2016 in a municipality that made extensive use of asbestos in the last 60 years, Osasco, with rates from a referent municipality, where asbestos consumption has been much less and with the rates for the State of São Paulo.

We conducted an ecological study using information on lung cancer mortality and population estimations of two large cities in the State of São Paulo and for the whole State. Data were extracted from the Mortality Information System (SIM) of the Ministry of Health, provided by the National Health System [18].

Mortality rates due to tracheal, bronchial and lung cancer in Osasco were compared with those for Sorocaba and the State of São Paulo.
From 1980 to 1995, the underlying cause of death was retrieved from the SIM using the International Classification of Diseases 9th revision (ICD-9 C162). Data from 1996 to 2016 were coded under the 10th revision (ICD-10 C34). As tracheal cancer was separated from lung and bronchial cancer in ICD 10, to correct this divergence, we added C33 malignant tracheal neoplasm to C34.
Population data were obtained from the electronic pages of Datasus provided by the Brazilian Institute of Geography and Statistics (IBGE) for the censuses conducted in 1980, 1991, 2000, and 2010 [20]. For intercensitary years, we used projections from the same data source. Deaths in which sex and age (0.04%) data were missing were excluded from the analysis.
Age-standardized mortality for the age group 60 and older was calculated for each sex. Age standardization was performed using the direct method with the standard world population modified by Doll [21]. For time trend analysis, we obtained the rates for each year using a simple five-year moving average.
We plotted the rates and chose the regression model with the better goodness-of-fit as measured by the R2 value. Significant trends were considered as having a p-value ≤0.05. A joinpoint [22] analysis was fitted to calculate the mean annual percentage change (AAPC) and the respective 95% confidence intervals.
Age-period-cohort analysis used Poisson regression models. Data were grouped into five-year categories: For age- from 60–64 years to 80 years and over; for the period 1981–1985 to 2011–2015; and for the birth cohort from 1901–1905 to 1951–1955. The difference between period and age group resulted in the value for birth cohort.
In the model used, the effects act multiplicatively, so the expected value for the rate logarithm is a linear function of the age, period and cohort effect [23,24]. The age-period-cohort model splits time into three axes: Age, period, and cohort. These models were built for verification, in particular in our study, of the period effect. Such an effect often results from external factors affecting the age groups over a specific period of time. In the cohort effect, similar health outcomes are observed in groups of individuals who were born in similar years. In the effect of age, the influence of time on health outcomes is observed. where λ is the rate formula and αa, βp, and γc are the functions of age (a), period (p), and birth cohort (c). We used the median values for cohort (1936–1940) and period (2001–2005) as reference. There was a limitation for the estimation of the complete model, due to the exact linear relationship of age, period, and cohort effects. To circumvent this limitation and to calculate the effect parameters, we used the method proposed by Holford in which the estimable functions are deviations, curvatures, and derivations (drift) [23].
We selected the model that presented the lower deviance, as a sign of better goodness-of-fit. The significance level was set at 5%. The relative risk (RR) (with 95% confidence intervals) was the association measure, with RR = 1 being the reference cohort and RR = 1 being the reference period.
The analyses for age-period-cohort effect were performed using R Statistical Software, version 3.5.2. The research ethics committee of the School of Public Health of the University of São Paulo approved this study under the protocol number 2.518.202 in 2018.

During the 37 years considered (1980–2016), 967 (men), and 444 (women) deaths due to lung cancer were registered in Osasco, whereas 905 and 399 occurred in Sorocaba and 73,308 and 33,406 in the State of São Paulo. The highest age-standardized mortality rates for lung cancer in old men were in Sorocaba in the first period (1980–84) and in Osasco in the last period (2012–2016). Between 1980 and 2016, Osasco showed a mean annual increase of 0.7% (CI: 0.1; 1.3) in age-standardized death rates, in contrast to a decrease in Sorocaba of –1.5% (CI: −2.4; −0.6) and a stable trend in São Paulo of −0.1% (CI: −0.3; 0.1) (Table 1).
Figure 1 presents scatter plots with detailed modelled trend curves for men and women. The best fitting trend lines for the period 1980–2016 were a polynomial regression model for males and a simple linear curve for females. Lung cancer mortality among men increased in all locations in the beginning of the period, with a peak at the end of the 1990s followed by a subsequent decrease. This reduction was more discrete in Osasco, where the rates surpassed those in Sorocaba and São Paulo. The differences in trends according to location remained in stratified analyses by age group (five-year intervals) (Figure 2).
Among women aged ≥60 years, the highest age-standardized mortality rates for lung cancer were in São Paulo in the first period and in Osasco in the last period (Table 1). In females, similar growing trends for Osasco, Sorocaba, and São Paulo were observed, with a slightly higher increase in Osasco (Figure 1).
In the age-period-cohort analysis, the highest age-standardized mortality rates by lung cancer in men occurred in similar cohorts for all locations: For those born between 1916 and 1935 in Osasco; between 1926 and 1940 in Sorocaba; and 1921 and 1940 in São Paulo State (Figure 3) (Table S1).
When assessing the period effect, rates due to lung cancer increased in old men from Osasco between 1996 and 2015, with the exception of a decrease in the period during 2006–2010. Conversely, the risk of death by lung cancer decreased among old men in Sorocaba, remained stable in the state of São Paulo in the periods 1996–2000/2001–2005 and decreased in 2006–2010 (Figure 3) (Table S2). The age-period model, the drift and the age-period-cohort showed the best goodness-of-fit for Osasco (p = 0.076), Sorocaba (p < 0.001), and the State of São Paulo, respectively (p < 0.001) (Table 2).
Among women, the age-cohort period analyses revealed similar increases in mortality for the cohorts born after 1940 and for the periods after 2000 in all locations assessed (Figures S1 and S2, Table S3).

There is evidence of an increased risk of death due to tracheal, bronchial and lung cancer in males, specifically in Osasco, a city that housed a large cement-asbestos industry in the last century. Our study points to the possibility of increased mortality due to lung cancer in cities exposed to asbestos, especially chrysotile. The surveillance of lung cancer cases and deaths in these areas is strongly recommended. In addition, the surveillance of the prevalence of major risk factors for lung cancer—such as tobacco smoking, asbestos exposure, ionizing radiation, and air pollution—is important to increase the accuracy for more specific analysis of the fibre effect on lung cancer. 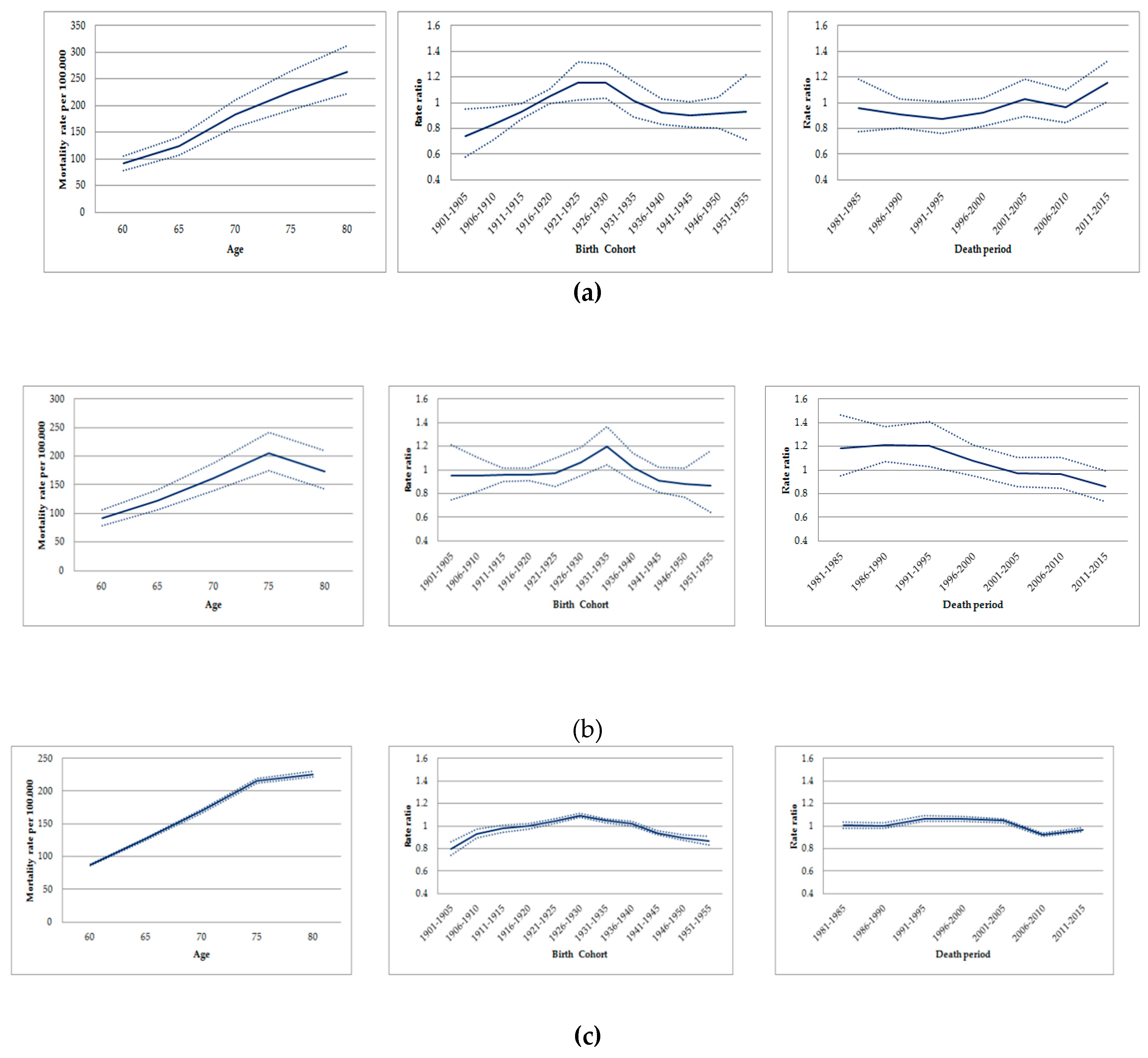