Factors Associated with Burnout in Medical Academia: An Exploratory Analysis of Romanian and Moldavian Physicians
Previous Article in Special Issue

Acute and Cumulative Effects of Haze Fine Particles on Mortality and the Seasonal Characteristics in Beijing, China, 2005–2013: A Time-Stratified Case-Crossover Study

:
We observed significant effects of particulate matter (PM2.5) on cause-specific mortality by applying a time-stratified case-crossover and lag-structure designs in Beijing over a nine-year study period (2005–2013). The year-round odds ratio (OR) was 1.005 on the current day with a 10 μg/m3 increase in PM2.5 for all-cause mortality. For cardiovascular mortality and stroke, the ORs were 1.007 and 1.008 on the current day, respectively. Meanwhile, during a lag of six days, the cumulative effects of haze on relative risk of mortality, respiratory mortality and all-cause mortality was in the range of 2~11%. Moreover, we found a significant seasonal pattern in the associations for respiratory mortality: significant associations were observed in spring and fall, while for all-cause mortality, cardiovascular mortality, cardiac and stroke, significant associations were observed in winter. Moreover, increasing temperature would decrease risks of mortalities in winter taking fall as the reference season. We concluded that in summer, temperature acted as a direct enhancer of air pollutants; while in winter and spring, it was an index of the diameter distribution and composition of fine particles.
Keywords:
time-stratified; case-crossover; haze; PM2.5; mortality; seasonal

Haze is one kind of serious air pollution caused by the accumulation of fine particulate matter (PM2.5) in the atmosphere. It could be attributed to air pollutants emission to the lower atmosphere from fossil fuel combustion or construction and other causes concurrent with unfavorable meteorological diffusion conditions. Air pollutants include polluted gases (sulfur oxides, oxynitride, carbon oxide, and hydrocarbon compounds) and particulate matters (PM2.5) from both industrial and natural sources such as sand-dust, bacteria and spore [1]. In nearly 20 years, severe haze events have been showing an increasing trend in China. For example, in 2013, several extreme haze events occurred over northern and eastern China [2,3]. Also in the year 2013, an extremely severe haze incident occurred which lasted for seven days in January. In this incident, the hourly PM2.5 concentrations in many cities exceeded the upper limits of the Air Quality Index. Frequent hazy weather, which has lots of hazardous material, may have adverse effects on human health as well as the climate [3,4,5,6,7,8].
Beijing is the largest megacity in northern China as well as one of the areas with the most severe haze incidents. The number of annual average haze events in Beijing is about 1.5 times higher than the national average (31.7 days to 20 days, 1961–2013) [1]. Meanwhile, the frequency of haze events shows an increasing trend (9.7 days/10years) [1]. However, studies on the health impacts of haze in Beijing are very limited. As the main toxic component in haze, the association between fine inhalable particles and cause-specific mortalities has been investigated as well as the role of temperature in Beijing [9,10,11,12,13,14], and these studies showed that chronic exposure to fine particulate air pollutants was associated with increased relative risk of respiratory mortality. Most of the literature focuses on the acute effects of air pollutants on mortality; however, fine particles may increase the risk for adverse health when exposure occurs over a longer duration. As haze often lasts for several days, the effects of PM2.5 on morbidity/mortality might delay or last for longer periods, and cumulative effects could be expected [15].
Several studies [16,17] have explored longer-term effects and gave out positive conclusions. More importantly, the cumulative effects of the lag combined with temperature and the seasonal characteristics caused by varying emissions and atmospheric reactions have not been explored. Considering the lag and accumulative effects of haze and the difference between haze particles and non-haze particles in composition and size distribution, the role of temperature in PM2.5 effects on health outcomes might be different.
In this study, we used a case-crossover and non-linear lag model with suitable structures to assess the acute and cumulative effects of PM2.5 particles on mortality. More importantly, we aimed to explore how temperature/season modified the effects of PM2.5 with varying emissions and size distribution. Our study goal was to assess the impacts of hazy fine particles on human mortality in northern China and to discuss the seasonal modification on PM2.5 effects.

We conducted the study in an urban area of Beijing (Haidian District, see Figure 1), China, from 1 January 2005, to 31 December 2013 (3287 days). Haidian District is situated in northwest Beijing, covers an area of 430 square kilometers, and has a population of more than 3 million. It stretches from latitude 39°53′ N to 40°09′ N and from longitude 116°03′ E to 116°23′ E. Haidian spans approximately 30 kilometers from north to south and 29 kilometers from east to west.
Haidian District lies in a continental monsoon region in a warm temperature zone and has an average yearly temperature of 12.3 °C. It is windy in spring and dry and cold in winter [13].

A time-stratified case-crossover design was used to investigate the acute associations between PM2.5 and cause-specific mortality, and we used conditional logistic regression to calculate odds ratio (OR) for PM2.5 correspond to a 10 µm/m3 increase. In case–crossover study design, the idea is to compare “case” days when deaths occurred with control days to look for differences in exposure that might explain differences in the number of cases. There are two main parts to a case–crossover analysis: (1) matching the controls days to the case days, (2) performing the conditional logistic regression to calculate the odds ratio for cases compared with controls for a unit increase in exposure. In our study, we chose the unit increase as 10 µg/m3. We used 35-day stratum length with an exclusion period of three days and controlled for day of the week. The case-crossover study design inherently controls for factors that do not vary within person (e.g., age, sex, genetics) and adjusts for confounding by longer term trends and meteorological factors. Current day was designated for the day that death was reported. The stratum length was 35 days and the exclusion period was three days. DOW (day of the week) was also considered as a dummy variable.
In our study, we controlled more rigidly for temperature to assess the effects of PM2.5 more accurately. To achieve this goal, we set temperature as an independent confounder and selected control days within a same temperature range (in our study this range was 2 °C) as the case day. So shape of the non-linear association between temperature and mortality risk is not important. R software [19] and the “season” package [20,21] were used to perform the analysis.
In this study, we also applied a distributed lag non-linear model (DLNM) to describe the cumulative health effects of PM2.5 with the “dlnm” package in R [22]. This model class is based on the definition of a cross-basis, a bi-dimensional space of functions describing the association along the spaces of predictor and lags. The main advantage of this method is that it allows the model to contain a detailed representation of the time-course of the exposure–response relationship, which in turn provides an estimate of the overall effect in the presence of delayed contributions. In this methodology, estimated relationships allow for a temporal structure of dependency. This is useful because in environmental epidemiology studies, a specific exposure event often affects health outcomes for a period of time beyond the actual event and cumulative effects could be expected. We used a linear DLNM constrained to a 5-day lag period to effectively capture the overall effects of haze.
All statistical tests were two-sided, and p < 0.05 was considered statistically significant.

We assessed the robustness of the DLNM model and logistic regression model via sensitivity analysis, replacing the mean daily temperature with maximum and minimum daily temperature. We also changed stratum lengths. To analyze the possible contribution of SO2 and NO2, we input these two pollutants into these two models.

To analyze the possible contribution of SO2 and NO2, we input these two pollutants into the model. Estimates of PM2.5 changed very little after controlling for SO2 and NO2. We found that the effect of haze did not significantly change after controlling for SO2 and NO2.
Sensitivity analyses indicated that degree of freedom and length of stratum did not significantly change the findings. Also, we found very little change after we replaced mean daily temperature with maximum and minimum daily temperature.

In this study, we estimated the cumulative risk as well as lag-specific estimates of haze fine particles on cause-specific mortalities with case-crossover design and lag models. We also explored the seasonal characteristic of PM2.5 effects on health outcomes. We concluded that haze fine particles had significant impacts on cause-specific mortalities in Beijing, and these impacts exhibit strong seasonal characteristics.

This study was funded by the National Key Research and Development Program of China (No. 2016YFA0602004) and Beijing Municipal Natural Science Foundation (No. 7192069). 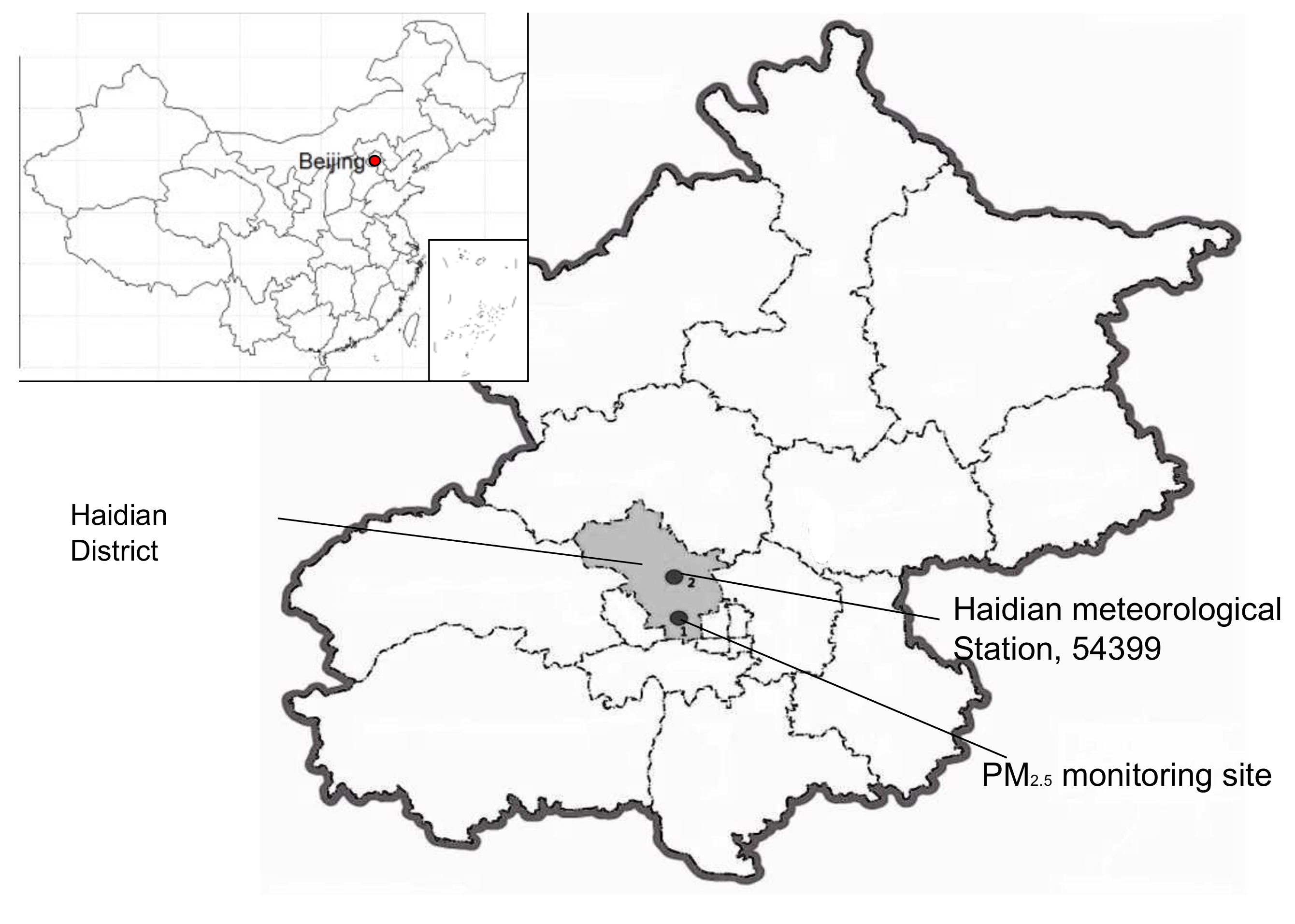 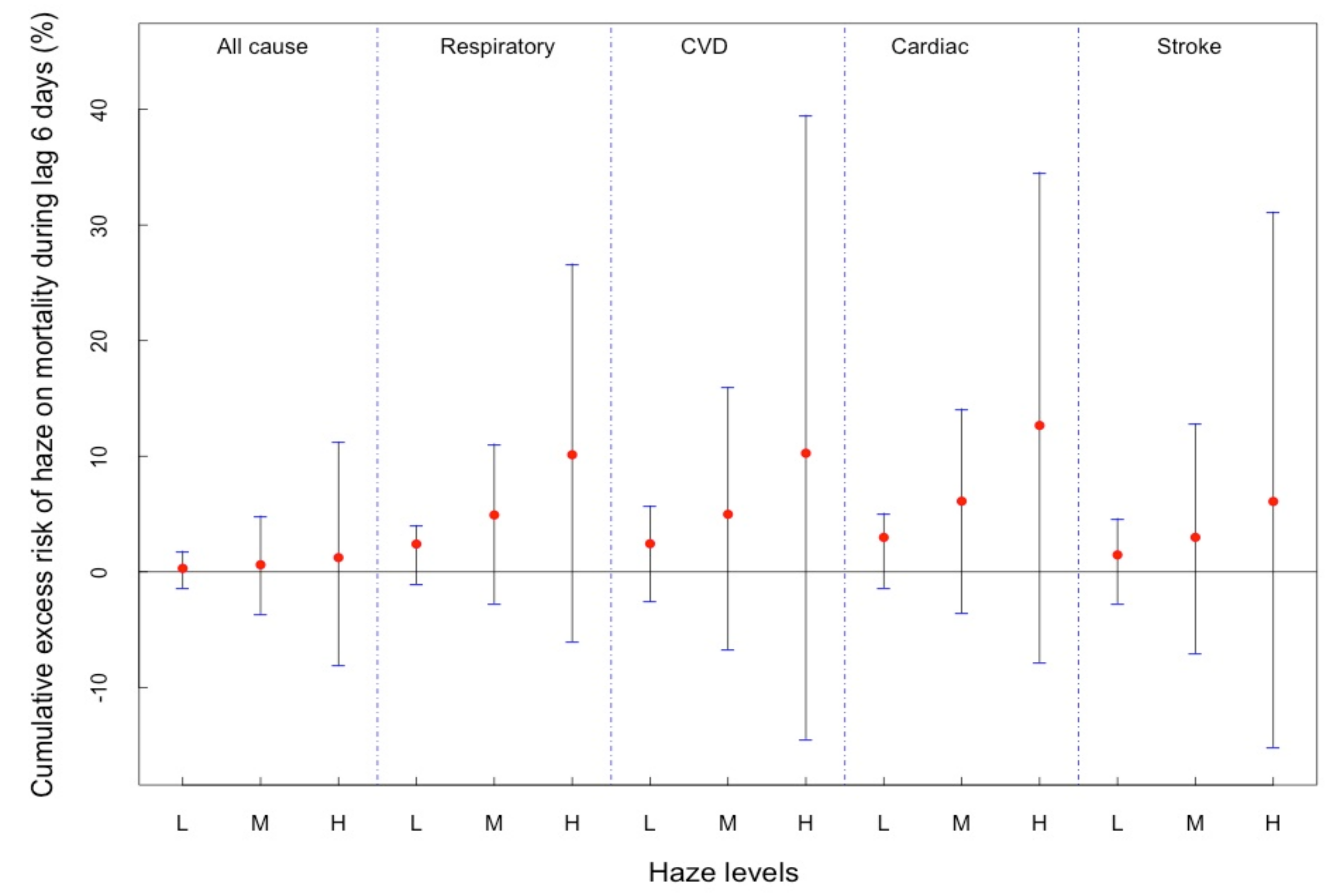