This study was conducted in accordance with the Declaration of Helsinki, and the protocol was approved by the Research Ethics Committee of the Taipei Medical University Joint Institutional Review Board (date of approval: April 20, 2016; approval no.: TMU-JIRB No. N201601017). All participants signed the informed consent form for inclusion before enrollment in the study.

This was a 3-month-long, double-blind, randomized controlled trial. The participants were patients undergoing full-mouth orthodontic treatment in the orthodontic department of Taipei Medical University Hospital from 2017 to 2018. Patients who fulfilled the following criteria were included in the study: (1) having permanent dentition, including severe crowding or spacing, (2) undergoing full-mouth complete orthodontic treatment with fixed appliances, and (3) aged > 18 years. Patients with severe periodontitis or caries and aged <18 years were excluded. After screening, block randomization was used, and the patients were randomly allocated to three groups through selection using sequentially numbered (1, 2, and 3), opaque sealed envelopes at a ratio of 1:1:1.

The dentifrices assessed are listed as follows: group 1’s dentifrices contained enzymes including amyloglucosidase, glucose oxidase, lactoperoxidase, lysozyme, and lactoferrin (Intelligent®, Free Bio-Technology Corp., Taipei, Taiwan); group 2’s dentifrices contained 0.315% w/w sodium fluoride (i.e., 1450 ppm fluoride) (Sensodyne® ProNamel®, GlaxoSmithKline Consumer Healthcare, Brentford, U.K.); and group 3’s dentifrices contained naturally derived ingredients without fluoride (no added chemical agents) (Jack N’ Jill LLC, Carson, CA, USA). Group 3 was the control group. All dentifrice tubes were wrapped with white tape, such that they appeared similar from the outside and were coded with the numbers 1, 2, and 3. The code for each dentifrice was placed in a sealed opaque envelope and kept in a locker of the orthodontic department office.

After baseline data collection, all teeth were cleaned using a low-speed nylon brush. The self-ligating brackets (Damon 3MX, Ormco, Glendora, CA, USA) were directly bonded from incisors to premolars, and no other orthodontic attachments, intraoral elastics, or TADs (temporary anchorage devices) were placed during the trial. The bands were fitted and cemented in both first and second molars. Thereafter, the patients were randomly allocated into three groups. The corresponding dentifrices and oral hygiene instructions were given to every patient. All patients were instructed to brush their teeth for 3 min with the dentifrices four times a day (after three meals and before sleep). They were instructed to use 1 cm of the dentifrice each time and brush without diluting the dentifrice in water. The patients were called for follow-up every 3 weeks in the first 3 months of the orthodontic treatment, and the measurements were recorded before the orthodontic adjustment during the follow-up visits.

Statistical analyses were performed using SigmaPlot (version 14.0; Systat Software, San Jose, CA, USA). The data were tested for normality (Shapiro–Wilk test) and homogeneity of variance (Brown–Forsythe test). The Kruskal–Wallis test was used to compare the nonparametric variables among the three groups at baseline. The Friedman test was used to compare the nonparametric variables, one-way repeated measures analysis of variance (ANOVA) was used to compare the parametric variables within each group during the experiment, and Tukey’s post hoc test (p < 0.05) was used in all pairwise multiple comparisons. The McNemar’s test, chi-square test, and Yates continuity correction were applied for comparisons among the questionnaires. The significance level was set as p < 0.05 for all statistical tests. The confidence interval was 95%.

The authors are grateful to all participants of this study in Taipei Medical University Hospital and the generous support by Free Bio-Technology Corp.

The authors declare no conflict of interest. The sponsors had no role in the design of the study; in the collection, analyses, or interpretation of data; in the writing of the manuscript, or in the decision to publish the results. 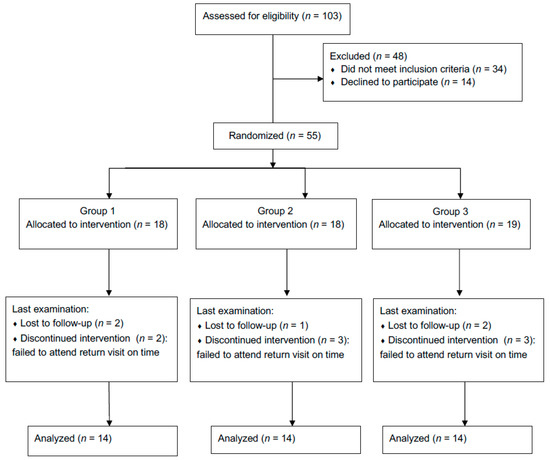 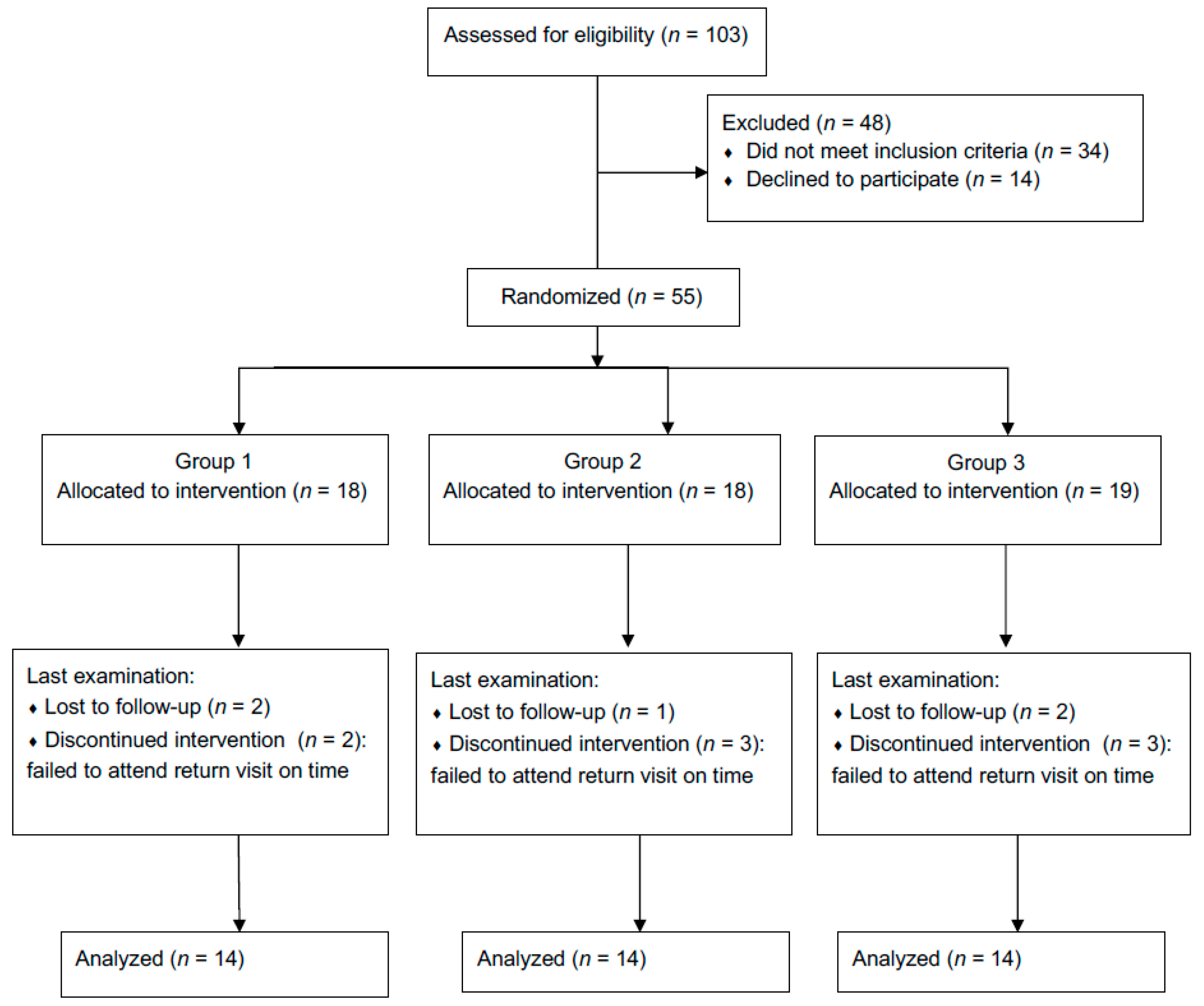 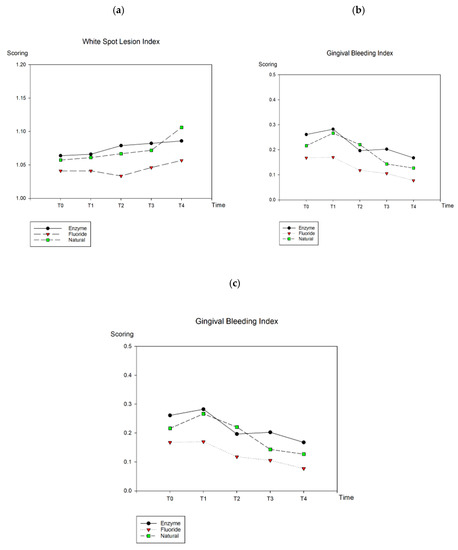