Sustained Release Technology and Its Application in Environmental Remediation: A Review
Next Article in Special Issue

A Low-Cost, Passive Release Device for the Surveillance and Control of Mosquitoes

:
Aedes aegypti were exposed to water treated with mosquitocidal chips containing the insecticide pyriproxyfen in a polymer formulation. Chips were tested under different conditions; different water volumes, in containers made of different material, and in water with different levels of organic matter. Treated chips caused 100% mortality of Ae. aegypti during their pupal stage independent of size or type of container, and the mount of organic matter contained in the water to which the mosquito larvae were exposed. When mosquitocidal chips were used in >25% of the oviposition containers within their cages, there was a significant control of the mosquito populations. Mosquitocidal chips worked in different environments, caused significant mosquito population decreases, and were effective in controlling Ae. aegypti.
Keywords:
Mosquito; Aedes aegypti; Diptera; Culicidae; Insect Growth Regulator; Pyriproxyfen

Aedes aegypti, the yellow fever mosquito, is considered one of the world’s greatest health threats. One class of chemicals commonly used to control Ae. aegypti larvae are insect growth regulators (IGRs) [1,2]. IGRs disrupt insect growth and reproduction by interfering with insect development [1,2,3]. Juvenile hormone analogs (JHAs) disrupt insect development and prevent insects from reaching the adult stage by providing increasing juvenile hormone in insects at a time these compounds do not normally occur [2,3], therefore preventing proper mosquito development.
Pyriproxyfen, a juvenile hormone analog, is a relatively stable chemical which results in insects being unable to molt to the adult stage [3,4]. It is approved by the U.S. Environmental Protection Agency for use in small containers to control Ae. aegypti because of its relatively low toxicity to non-target organisms [4,5,6], and safety to humans. The World Health Organization (WHO) has also approved pyriproxyfen at a rate of 10 PPB for use in potable water [7].
Control of Ae. aegypti is difficult because of different behaviors including daytime feeding habits, the ability to develop in a wide variety of water holding containers, and skip oviposition, where one female will lay her eggs in numerous containers [8,9,10]. However, pyriproxyfen is effective at reducing populations of Ae. aegypti [11,12] since Ae. aegypti females are not deterred from laying eggs in pyriproxyfen-treated containers.
Although effective for mosquito control, pyriproxyfen is labeled for treating large bodies of water, complicating control in small containers. The objective of this study was to test the efficacy of mosquitocidal chips treated with slow-release pyriproxyfen formulation to decrease Ae. aegypti populations. Use of pre-treated chips with a small dose of pyriproxyfen facilitates the use of the product by final users, especially those lacking formal education. The pre-dosed chip requires no preparation, dilution, or additional manipulation by the final user, who can apply the mosquitocidal chips to a variety of potential mosquito breeding containers. Although the use of pyriproxyfen in drinking water may not be advisable due to some health concerns [13], its use in containers of water not destined to human consumption, or other natural or artificial water-holding vessels, can be an important tool in the control of mosquitoes around human dwellings. The slow-release formulation on the chips remains active for a minimum of 6 months through dry–wet cycles and can provide continuous control of mosquitoes for a whole mosquito for at least one season without reapplication of the product.

There was no significant difference in mosquito mortality with different percentages of leaf infusion (F = 0.422, df = 5, p ≤ 0.829, Figure 3), although in the 0% and 10% leaf infusions, mosquitoes were killed at a faster rate than all other treatments, 100% mortality was reached with all treatments on the fourth day.

3.4. Population and Oviposition Effects of Chips

There was a significant difference between the different treatments in the number of live adults that resulted from continuous population growth for 2 weeks (F = 51.87, df = 4, p ≤ 0.0001). There was also a significant effect in the percent larval emergence (F = 21.33, df = 4, p ≤ 0.0001), but no significant difference in the number of eggs laid in each treatment (F = 0.328, df = 4, p = 0.855). These treatments showed a linear pattern, indicating that with increased treatment there was lower emergence of adult mosquitoes (Figure 4). Female oviposition showed no preference for laying in either treated or control containers. Number of eggs laid in either treated or untreated containers approximated the percent of treated or untreated cups in cage (Table 1), except when similar numbers of treated and untreated containers were placed in the cage with the mosquitoes. In these cages, greater oviposition was observed on the treated containers.

Aedes aegypti use different types of containers with varying water volumes [9,15], but the mosquitocidal chips were effective in water varying volumes because the mosquitocidal chips were designed to release 10 PPB pyriproxyfen in 1000 mL of water. In this experiment, varying water volumes would have allowed 10–40 PPB concentrations of pyriproxyfen, if all the active ingredient would have been released from the mosquitocidal chips. Doses as low as 1 PPB of pyriproxyfen result in high mortality of Ae. aegypti [11,16,17,18]. Due to pyriproxyfen’s efficacy at such small doses, these chips could be used in larger water volumes to achieve lower concentrations of pyriproxyfen in the water.
Aedes aegypti is opportunistic in choosing containers for larval development, therefore, control methods must be adequate for use in different container types from natural to artificial materials. Our results show that the mosquitocidal chips could be used in a variety of containers with minimal differences in Ae aegypti mortality. Ceramic and clay containers had the fastest rates of mortality, perhaps due to less absorption of the insecticidal active ingredient to the container walls. This contrasts with studies done by Vythilingam et al. [19], who found that earthen jars reduced long-term efficacy of pyriproxyfen, but those authors found negative effects of these materials after 10 wks. Differences in results may be due to the pyriproxyfen formulation that provides a slow release of pyriproxyfen over longer time. Slow release formulations may be important due to the tendency of some materials to absorb pyriproxyfen [6] reducing its availability in water and mosquito control efficacy.
Pyriproxyfen is also known to tightly adhere onto organic matter [4,20], with consequent decline in concentration in water. However, our experiments demonstrated no significant difference in rate of mortality regardless of the presence of organic matter in the form of oak leaf infusion, which contains mostly leaf chemicals, bacteria, and minimal debris, in contrast suspended organic matter including leaves and soil, which could have more readily absorbed the pyriproxyfen. In contrast with the Schaffer [20] and Sullivan [4] who used ponds containing large amounts of suspended organic debris, the mosquitocidal chips were designed for use in containers around human dwellings where the minimal suspended organic debris would be expected. 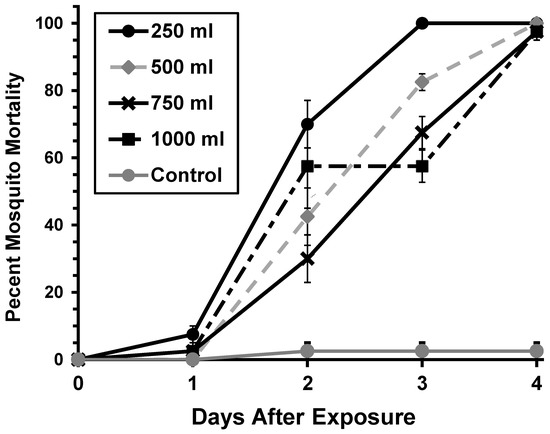 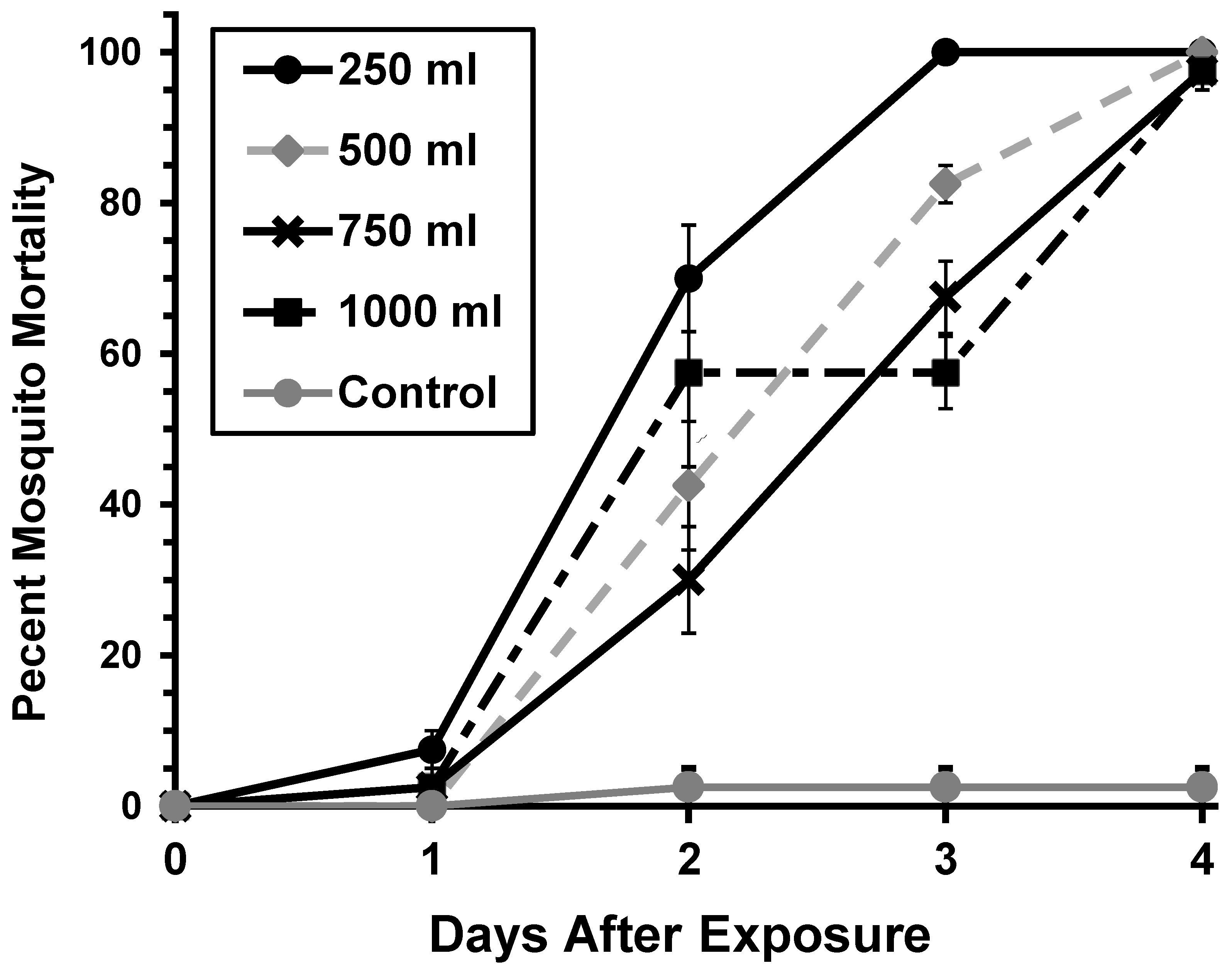 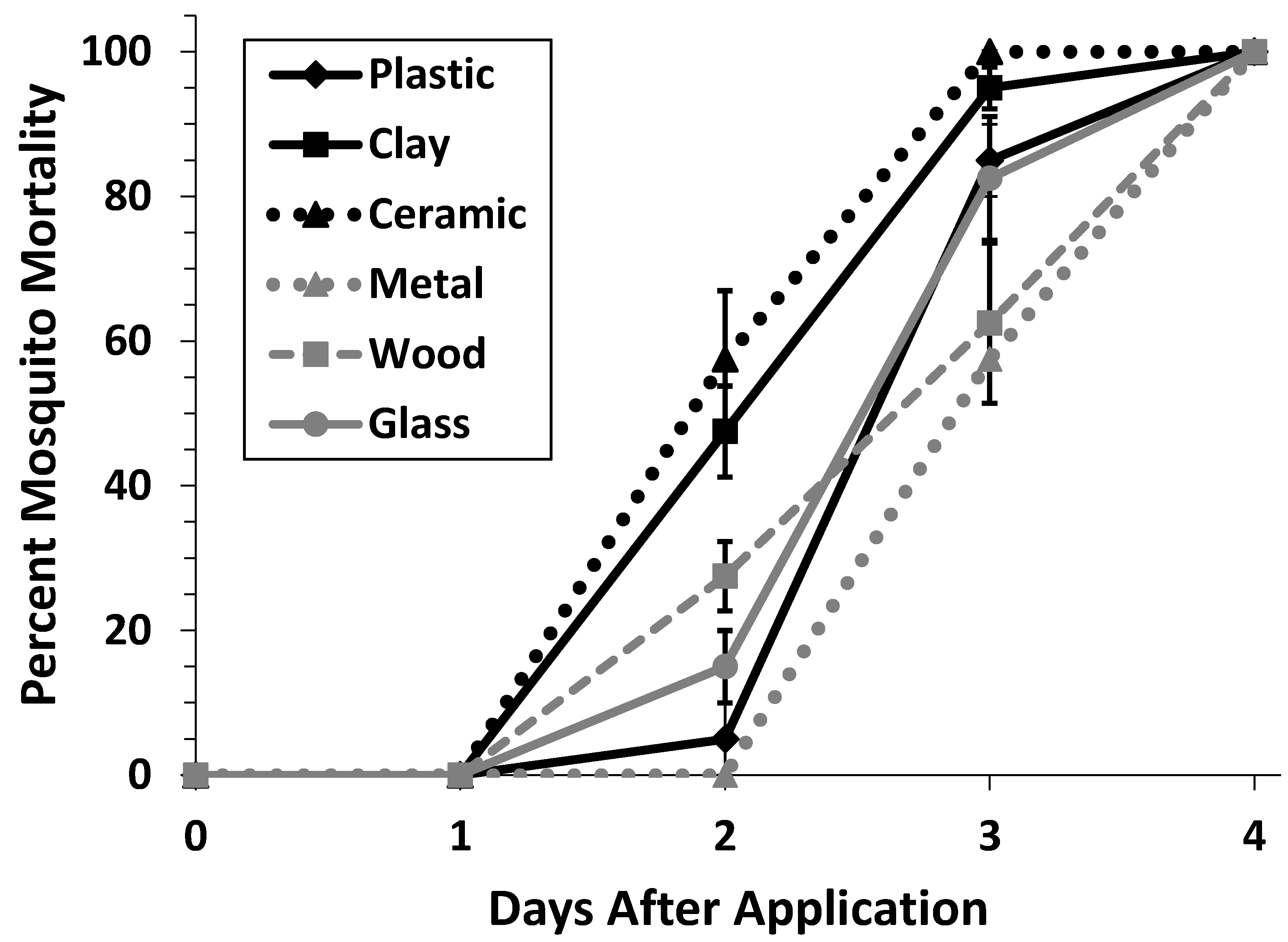 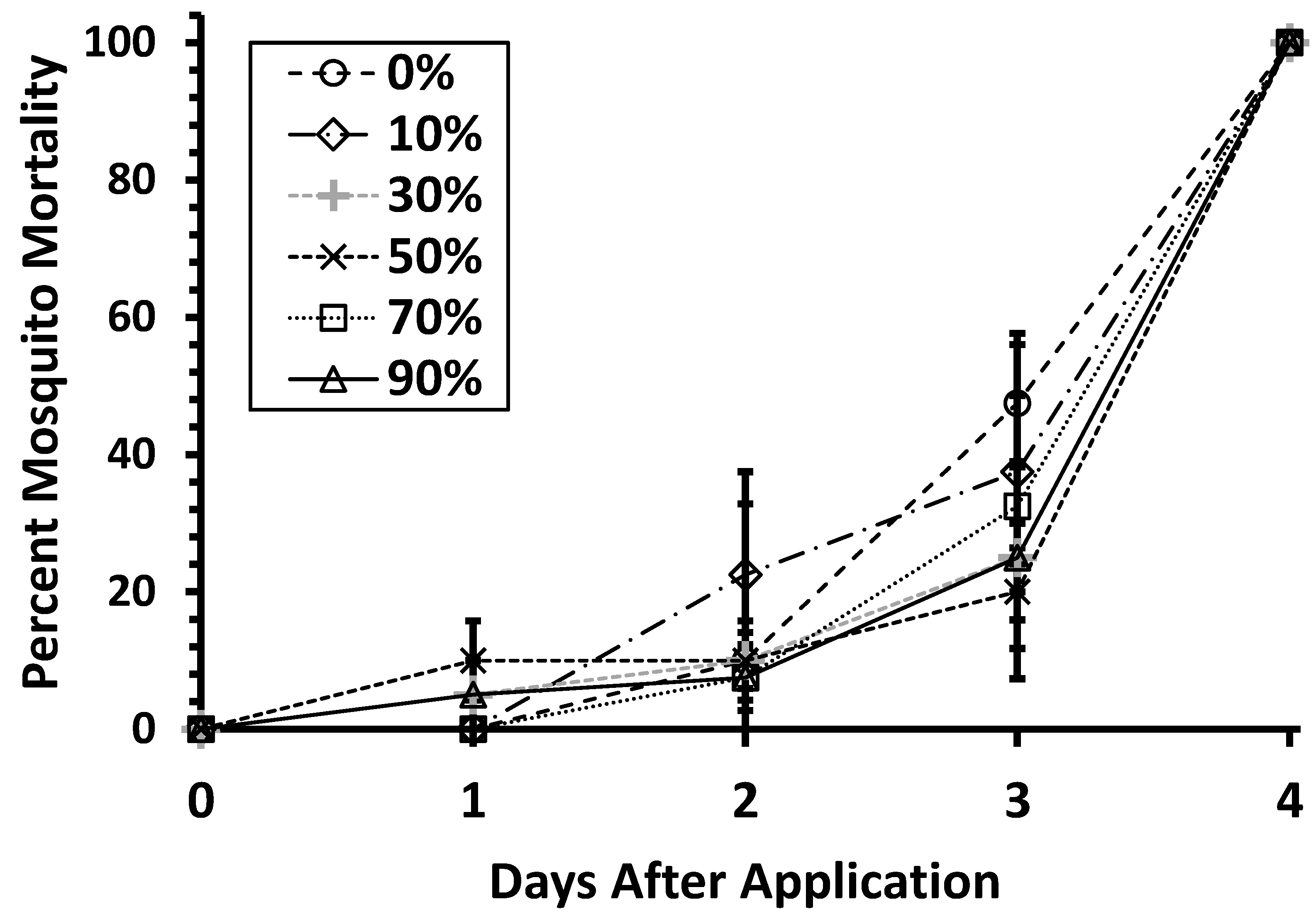 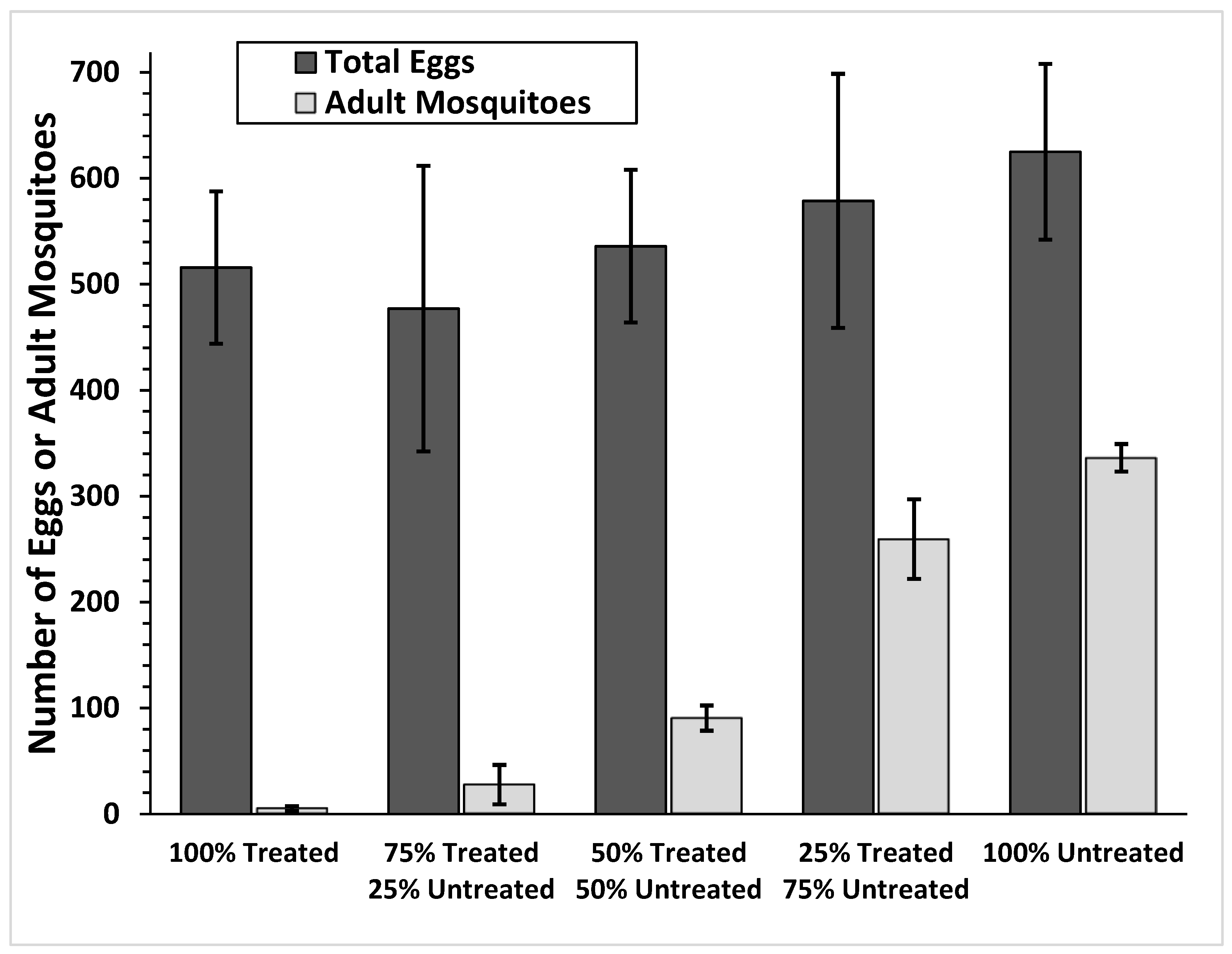