The Search for Environmental Justice: The Story of North Birmingham
Previous Article in Journal

Understanding Where We Are Well: Neighborhood-Level Social and Environmental Correlates of Well-Being in the Stanford Well for Life Study

Individual well-being is a complex concept that varies among and between individuals and is impacted by individual, interpersonal, community, organizational, policy and environmental factors. This research explored associations between select environmental characteristics measured at the ZIP code level and individual well-being. Participants (n = 3288, mean age = 41.4 years, 71.0% female, 57.9% white) were drawn from a registry of individuals who completed the Stanford WELL for Life Scale (SWLS), a 76-question online survey that asks about 10 domains of well-being: social connectedness, lifestyle and daily practices, physical health, stress and resilience, emotional and mental health, purpose and meaning, sense of self, financial security and satisfaction, spirituality and religiosity, and exploration and creativity. Based on a nationally-representative 2018 study of associations between an independent well-being measure and county-level characteristics, we selected twelve identical or analogous neighborhood (ZIP-code level) indicators to test against the SWLS measure and its ten constituent domains. Data were collected from secondary sources to describe socio-economic (median household income, percent unemployment, percent child poverty), demographic (race/ethnicity), and physical environment (commute by bicycle and public transit), and healthcare (number of healthcare facilities, percent mammogram screenings, percent preventable hospital stays). All continuous neighborhood factors were re-classified into quantile groups. Linear mixed models were fit to assess relationships between each neighborhood measure and each of the ten domains of well-being, as well as the overall SWLS well-being measure, and were adjusted for spatial autocorrelation and individual-level covariates. In models exploring associations between the overall SWLS score and neighborhood characteristics, six of the twelve neighborhood factors exhibited significant differences between quantile groups (p < 0.05). All of the ten SWLS domains had at least one instance of significant (p < 0.05) variation across quantile groups for a neighborhood factor; stress and resilience, emotional and mental health, and financial security had the greatest number of significant associations (6/12 factors), followed by physical health (5/12 factors) and social connectedness (4/12 factors). All but one of the neighborhood factors (number of Federally Qualified Health Centers) showed at least one significant association with a well-being domain. Among the neighborhood factors with the most associations with well-being domains were rate of preventable hospital stays (7/10 domains), percent holding bachelor’s degrees (6/10 domains), and median income and percent with less than high school completion (5/10 domains). These observational insights suggest that neighborhood factors are associated with individuals’ overall self-rated well-being, though variation exists among its constituent domains. Further research that employs such multi-dimensional measures of well-being is needed to determine targets for intervention at the neighborhood level that may improve well-being at both the individual and, ultimately, neighborhood levels. View Full-Text
Keywords: well-being; wellness; geography; neighborhoods; spatial analysis; social determinants of health well-being; wellness; geography; neighborhoods; spatial analysis; social determinants of health
►▼ Show Figures 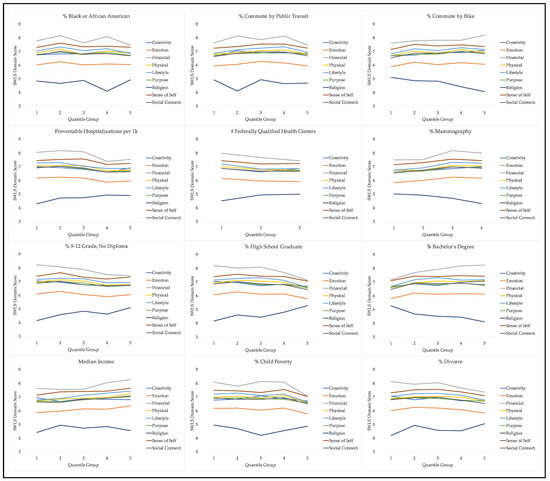