Tetanus Vaccination and Extra-Immunization among Adult Populations: Eight-Year Follow Up Cohort Study of 771,443 Adults in Taiwan, 2006–2013

The last case of polio from India was reported in 2011. That year, the non-polio acute flaccid paralysis (NPAFP) rate in India was 13.35/100,000, where the expected rate is 1–2/100,000. A previous study of data from 2000 to 2010 has detailed the NPAFP rate in a state correlated with the pulse polio rounds conducted there, and the strongest correlation with the NPAFP rate was found when the number of doses from the previous 4 years were used. However, a simple association being found with regression analysis does not prove a causal relationship. After publication of those findings, as the threat of polio had lessened, the number of rounds of OPV administration was brought down. The present study has been done to look at data till the end of 2017, to see if the incidence of NPAFP declined with this reduction in polio immunization rounds. We used polio surveillance data acquired by the Government of India from 2000–2017. Correlation of the NAFP rate to the number of polio rounds in the state was examined, and the cumulative effect of polio doses administered in previous years was sought. NPAFP rate correlated with the OPV pulse polio rounds in that year (R = 0.46; p < 0.001), and the NPAFP rate started to decrease from 2012 when the number of pulse polio rounds had decreased. NPAFP rates in the states of Uttar Pradesh (UP) and Bihar were the highest in the country. Looking at the high-NPAFP states of UP and Bihar, we found that the correlation coefficient was strongest when doses used over 5 years was considered (R = 0.76; p < 0.001). The response to the reduction in OPV rounds (de-challenging) adds credence to the assumption that OPV was responsible for the change in the NPAFP rate. Now that India has been polio-free for over 6 years, we propose that we may be able to reduce NPAFP by further reducing pulse polio rounds. View Full-Text
Keywords: polio surveillance; AFP; oral polio vaccine; non-polio acute flaccid paralysis; Guillain Barre Syndrome polio surveillance; AFP; oral polio vaccine; non-polio acute flaccid paralysis; Guillain Barre Syndrome
►▼ Show Figures 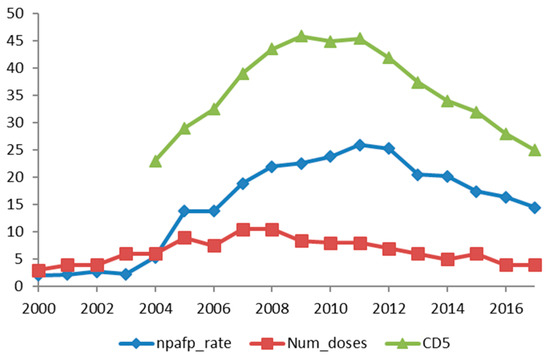