Exposure to Quartz in Finnish Workplaces Declined during the First Six Years after the Signing of the NEPSI Agreement, but Evened out between 2013 and 2017
Previous Article in Special Issue

Impact of a Translated Disease Self-Management Program on Employee Health and Productivity: Six-Month Findings from a Randomized Controlled Trial

Introduction: Spirometry performed prior to surgery provides information on the types of lung disorders in patients. The purpose of this study was to look for a relationship between the prevalence of diabetes and spirometry parameters. Material and Methods: The study was conducted in patients with coronary artery disease who were eligible for an isolated coronary artery bypass graft in 2013. The study group included 367 patients (287 men and 80 women) aged 68.7 ± 8.4 years. They were divided into those with diagnosed diabetes (group I, n = 138, 37.6%) and without diabetes (group II, n = 229, 62.4%). Spirometry tests were performed on the day of admission to the hospital. Results: Patients with diabetes (group I) had a significantly higher body mass index than those without diabetes (group II). Spirometry tests also showed that patients with diabetes had statistically significantly lower forced vital capacity (FVC) and forced expiratory volume in 1 s (FEV1.0). Both FVC and FEV1.0 were also statistically significantly lower for overweight and obese individuals in group I than those in group II. Conclusion: Patients with diabetes eligible for coronary artery bypass grafting with concurrent overweight or obesity are more likely to have lower spirometry parameters than those without diabetes. View Full-Text
Keywords: spirometry; diabetes mellitus; cardiac surgery spirometry; diabetes mellitus; cardiac surgery
►▼ Show Figures 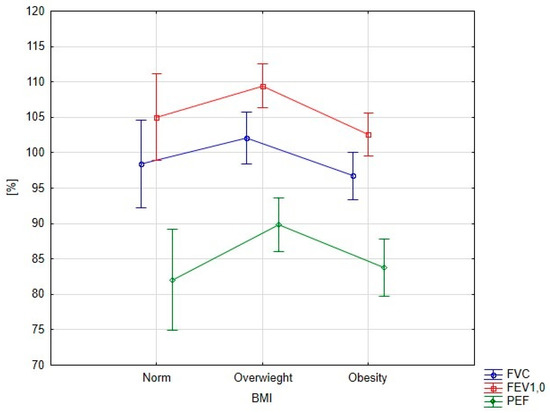