The Association between Maternal Stress and Childhood Eczema: A Systematic Review
Next Article in Special Issue

Taking Yanta District in Xi’an as the research object, the present study measures the contents of Cadmium (Cd), Lead (Pb), Copper (Cu), Nickel (Ni), and Chromium (Cr) in dust samples and further assesses the health risk of heavy metals intake through dust based on the assessment method of human exposure risk proposed by U.S. EPA, with an aim to investigate the content of heavy metal in the dust of leisure squares and its exposure risk. As the results indicate, the average contents of five heavy metals are obviously higher than the soil background value in Shaanxi Province. Therefore, Cd, Ni, Cu, Pb, and Cr are obviously enriched in urban surface dust in Shaanxi Province, due to the influence of human activities. In addition, it can also be found that the non-carcinogen exposure risk in children is significantly higher than that in adults with the risk values of these five heavy metals all one order of magnitude higher than those of adults. Irrespective of whether addressing the results for children or adults, the non-carcinogen exposure doses of five heavy metals are sorted as Cr > Pb > Cu > Ni > Cd. According to the present situation, for a child, the total non-carcinogenic risk values of five heavy metals have exceeded the safety limit in 11 of the 20 leisure squares in Yanta District of Xi’an. That means the leisure squares are no longer suitable for physical and recreational activities. For the five heavy metals, the average non-carcinogenic risk value of Cr is largest, and causes the largest threat to health in Yanta District, Xi’an. The carcinogenic exposure doses of the heavy metals Cr, Cd, and Ni are very low in respiratory pathways and there is no carcinogenic health risk. In general, the Cr content in dust in domestic cities is higher than that of foreign cities; however, the Pb content is much lower.
Keywords: leisure square; dust; heavy metal; health risk assessment leisure square; dust; heavy metal; health risk assessment

Owing to frequent human activities, such as transportation, social activities, and industrial production, there are more or less heavy metals in urban dust. Generally speaking, heavy metals in dust are mainly ingested through hand-mouth feeding, inhalation, and skin contact, which all will exert an unfavorable influence on human health [1,2,3]. Surface dust has become a main source of pollution in the urban environment. Therefore, much importance should be attached to the heavy metal pollution of dust in urban leisure squares [4,5], since these squares serve as urban public living places, the centers of social life of urban citizens, and the main places for the elderly to exercise and children to play. At present, quite a few studies, both at home and abroad, have been carried out in terms of the aspect of the content of heavy metals in urban dust. For example, Chang Jing has found that the contents of Pb, Zn, Cd, Cu, Ni, and Cr in street dust in Shanghai, respectively, are 49.3~847.1 mg/kg, 322.3~1722.0 mg/kg, 0.51~1.52 mg/kg, 91.5~495.0 mg/kg, 33.7~138.4 mg/kg, and 81.6~331.4 mg/kg, with average values of 264 mg/kg, 687.25 mg/kg, 0.97 mg/kg, 186.41 mg/kg, 64.91 mg/kg, and 218.91 mg/kg [6]. Similar studies have also been done in places like Nanjing [7], Tianjin [8], Shenyang [9], Chengdu [10] and Beijing [11] of China, Queensland [12], Imam Khomeini of Iran [13], Western and Central Bohemia of Czech [14], London, and some other European cities [15]. As for the heavy metal ingredient analysis and their pollution level in urban street dust in China, 3720 urban street dust samples were collected from 39 large and media-sized cities. The results show that the average mass ratios of As, Cd, Cr, Cu, Hg, Ni, Pb, and Zn in urban street dust in China are 17.82 mg/kg, 3.67 mg/kg, 152.85 mg/kg, 143.58 mg/kg, 0.66mg/kg, 46.74 mg/kg, 220.88 mg/kg, and 602.30 mg/kg, respectively. The heavy metal content overall variation amplitude is larger, which exhibits a skewed distribution, among which the variation coefficient of Cd is greater than 100%, which indicates that the mass ratio of Cd in surface dust in different cities in China is greatly affected by anthropogenic sources [16]. On the whole, the average mass ratios of Cd, Hg, and Pb are the largest, and also the most polluted in China [16]. Compared with the data in foreign countries, the ratios of Cd, Hg, and Pb are 4.41, 2.56, and 2.77 times higher than the corresponding values in foreign countries [13,17,18,19,20], indicating the serious heavy metal pollution of urban dust in China.
Based on the facts and data presented above, the present study, taking leisure squares in Yanta District in Xi’an (northwest China) as the research object, probes into the content of heavy metals in dust and its health risk, with an aim to provide theoretical references for the assessment of urban environmental quality and livable function.

On a fine day of February in 2016, dust samples were collected from 20 leisure parks (as is shown in Table 1) with plastic brushes and dustpans. Altogether, there were 20 samples, each of which was made up of five dust mixtures collected from one leisure park via the quincunx layout method, with an average weight of 200 g. Then, the contents of heavy metals in ground dust samples, which were kept in self-sealing bags, remained to be measured. The locations of leisure parks and symbolic representations are shown in Table 1 below.
Having been taken back to laboratory, the collected dust samples were air-dried and then filtered with a 1mm nylon sieve, in order to remove small stones, leaves, and hair, etc. Then, the dust samples, after being ground by a soil grinder, were sieved to less than 75 µm to remove large soil particles and then preserved in self-sealing bags for the measurement of heavy metal contents.

The samples should be digested with the mixed acid of HF-HNO3-HClO4. The specific steps were described as follows. Weigh 0.50 g dry samples and put them in the crucible with 50 mL Polytetrafluoroethylene and then add 5 mL HF, 5 mL HNO3, and 3 mL HCIO4. Heat this crucible to a nearly drying state. Then, add 3 mL HF, 3 mL HNO3, and 1 mL HClO4 again and heat to a nearly drying state. A total of 5 mL 1 mol/L HNO3 was used to dissolve the residue. At last, hold the sample in a 25 mL capacity bottle. The measurement of the contents of Cu, Pb, Zn, Cd, and Ni in leisure squares dust can be achieved by the atomic absorption spectrophotometer (Type ZEEnit 700P, Analytik Jena AG, made in Jena, Germany).
The sample collection area (Yanta District in Xi’an) is located in the south of the loess plateau, and the loess formation is more than 100 m, which is a typical loess distribution area. Therefore, the heavy metal contents in the dust of leisure squares are closely related to loess. For this purpose, the national standard soil sample (GSS-8, loess) was used for the quality control with the guarantee reagent (GR) regarded as the standard for the analysis process. The recovery rate of the measured metal elements is between 90% and 105%. One reagent blank is required for every 10 samples. The water used in the whole process should be ultrapure water. All the work was done in the environmental science laboratory of Shaanxi Normal University.

2.3.2. Calculation of Risk Value of Heavy Metals in Dust

3.1. The Content of Heavy Metals in Dust in Leisure Squares in Yanta District in Xi’an

3.2. Analysis of Heavy Metal Risk Exposure in Dust of Leisure Squares in Yanta District of Xi’an

3.3. Risk Assessment of Non-Carcinogenic Exposure in Leisure Squares of Yanta District in Xi’an

3.4. Risk Assessment of Carcinogenic Exposure in Leisure Squares of Yanta District in Xi’an

3.5. Comparison of the Dust Heavy Metal Concentrations with Other Cities

At present, heavy metals in urban road dust such as Cd, Ni, Cu, Pb, and Cr have been mostly studied from the perspective that the enrichment of these elements has important environmental significance and serious environmental pollution hazards [30,31,32]. As shown in Figure 3—the contents of heavy metals in road dust of some cities at home and abroad, the contents of different elements in road dust in different cities are quite different from each other, which is mainly related to the size of the urban population, traffic volume, urban topography, and meteorology, as well as the background concentrations in soils around the country. In terms of the urban leisure squares in Yanta District, Xi’an City, the Cr content in road dust is 2.37 times higher than its average in China [16] and about 1.97–23.46 times higher than that of other cities at home and abroad [6,17,19,27,33,34,35]. The Ni content is similar to the national average and to Riyadh [33], but obviously higher than that of Ottwa [20], Sydney [19], Hermosillo [17], Luanda [27], Beijing [34], and Chongqing [35], etc. The Cu content is below the national average and also Sydney [19] and Shanghai [6], but significantly higher than Ottwa [20], Riyadh [33], Hermosillo [17], Luanda [27], and Beijing [34]. The Pb content is remarkably lower than the national average and Sydney [19], Riyadh [33], Luanda [27], and Shanghai [6], etc., but higher than Ottwa [20], Hermosillo [17], and Chongqing [35], etc. In general, the Cr content in dust in domestic cities is higher than that of foreign cities, which is mainly due to the high background concentration of soil. However, owing to the large car ownership in developed western countries, the Pb content in road dust emitted from car exhausts is much higher than that of domestic cities. It is worth mentioning that although all the selected cities are important cities around the world, and the sample particle sizes are mainly focused on below 75–100 µm, due to the difference of the specific size and sampling area, the results may not completely accurately express the differences between cities. However, there is a rough understanding of the differences between them.

Based on the analysis and discussion above, conclusions can be drawn as follows.

The authors declared that they have no conflicts of interest to this work. 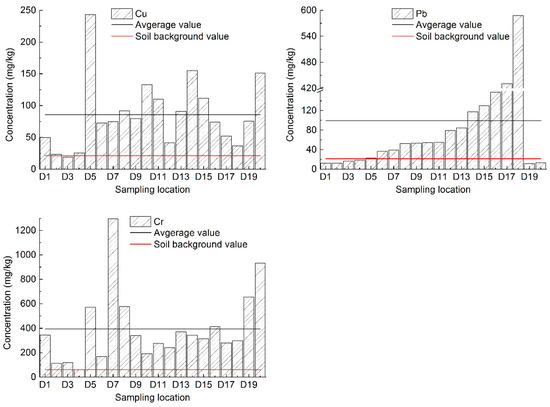