Activity of Antioxidant Enzymes and Their Association with Lipid Profile in Mexican People without Cardiovascular Disease: An Analysis of Interactions
Previous Article in Journal

Background: Humans are constantly exposed to low concentrations of 4-tert-octylphenol (OP). However, studies investigating the effects of low-dose OP on the liver are scarce, and the mechanism of these effects has not been thoroughly elucidated to date. Methods: Adult male institute of cancer research (ICR) mice were exposed to low-dose OP (0, 0.01 and 1 μg/kg/day) for 7 consecutive days. Weights of mice were recorded daily during the experiment. Blood serum levels of OP, alanine aminotransferase (ALT) and aspartate aminotransferase (AST) were determined, and haematoxylin-eosin (HE) staining of the liver was performed. We applied an integrated metabolomic and enzyme gene expression analysis to investigate liver metabolic changes, and the gene expression of related metabolic enzymes was determined by real-time PCR and ELISA. Results: OP in blood serum was increased after OP exposure, while body weights of mice were unchanged. Liver weight and its organ coefficient were decreased significantly in the OP (1 μg/kg/day) group, but ALT and AST, as well as the HE staining results, were unchanged after OP treatment. The levels of cytidine, uridine, purine and N-acetylglutamine were increased significantly, and the level of vitamin B6 was decreased significantly in mice treated with OP (1 μg/kg/day). The mRNA and protein levels of Cda and Shmt1 were both increased significantly in OP (1 μg/kg/day)-treated mice. Conclusions: Through metabolomic analysis, our study firstly found that pyrimidine and purine synthesis were promoted and that N-acetylglutamine was upregulated after low-dose OP treatment, indicating that the treatment disturbed nucleic acid and amino acid metabolism in mice liver. View Full-Text
Keywords: metabolomics; 4-tert-octylphenol; low-dose; liver toxicity metabolomics; 4-tert-octylphenol; low-dose; liver toxicity
►▼ Show Figures 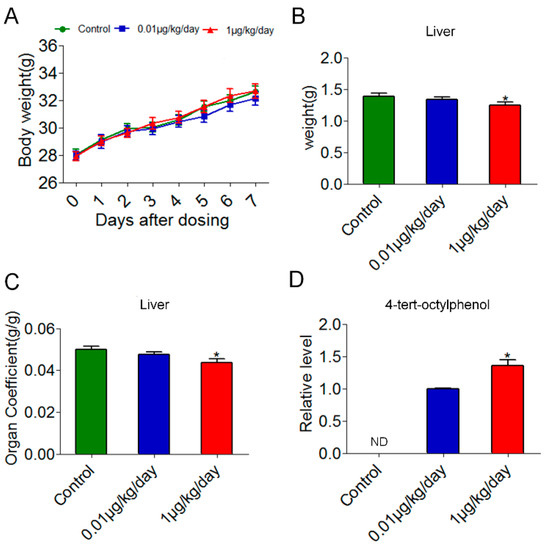