The Risk of Mortality among Psoriatic Patients with Varying Severity: A Nationwide Population-Based Cohort Study in Taiwan
Next Article in Special Issue

Originally developed by the United Nations to assess and monitor sustainability (the pressure-state-response framework), an extended ‘driver-pressure-state-impact-response’ (DPSIR) framework is a tool for detailed analysis that integrates economic, social and natural systems into a systemic approach. The DPSIR method presents mechanisms for analyzing and depicting environmental problems in an integrative way [16,17,18,19]. Extracting from the DPSIR framework, we build a ‘pressure-response-impact’ (PRI) framework (see Figure 1) which could be applied to analyze an individual household’s behavior and is more suitable to our research question. Specifically, following the pathway of ‘pressure from urbanization—household’s response on land-use based on land-use target—impact on land quality change’, we aimed to uncover the causal links between urbanization, land-use behavior and land quality change.

2.1.1. Land-Use Behavior in the Process of Urbanization: The Influencing Factors and Mechanism

Accelerated development of urbanization, either expansion of large cities and regions or expansion of small towns and rural villages, has resulted in a series of changes in economic structure, social structure, spatial structure, employment structure, price mechanism, land institution, etc. Under the pressure of an external socio-economic environment, as rational-economic decision-makers, farm households would adjust their land-use targets, i.e., for food production capacity, value-added capacity, or both food production and value-added capacities, in accordance with the changes of external context and owned essential production factors (including land, labor, capital and technology) [8]. Food production was mainly to meet the demand of rural households (food production capacity). When the food demand was met, households would reduce investment in grain production and instead plant cash crops to improve the profitability of land use (value-added capacity). In particular, the adjustment of socio-economic structure stemming from urbanization would: (a) increase the employment opportunities in peri-urban areas and accelerate the labor migration from rural to urban areas [20]; (b) increase the frequency of land expropriation and lead to cultivated land loss and land tenure insecurity [14]; (c) raise the prices of means of production and agricultural products [21]. All these may stimulate or hinder famers’ land-use behavior, including land-use pattern, land-use degree and land input intensity. In addition, policies such as agricultural subsidies and land tenure reforms may accelerate the land transfer, facilitate scale-farming and encourage investment in land [22,23].

2.1.2. The Influencing Mechanism of Land-Use Behavior on Land Quality

Land quality can be defined in different ways, but the soil nutrient changes and the nutrient balances are taken as key indicators of land quality [7]. Land-use behavior may greatly affect the direction and extent of soil nutrient changes and balances. Farmers’ land-use behavior could be represented by their decisions on plantation structure, land-use degree and land input intensity. Different plantation structures, i.e., the plantation of grain or cash crops, require different nutrient budgets and balances including nitrogen (N), phosphorus (P), potassium (K), etc. Land-use degree refers to the degree of interference with the land and the agro-ecosystem. Land-use degree can be represented by the multiple cropping index (MCI), which is defined as the total sowing area as a percentage of the total arable land for the same plot in one year [7]. Continuous and intensive cropping without restoration of soil fertility would deplete the nutrients of most soils, and nutrient balances are negative, indicating land degradation [7]. Land input intensity, e.g., the input of organic or chemical fertilizers, has a more direct impact on land quality. Rational investment in land could supply more nutrients essential to the growth of crops, improve the nutrient balance in the soil. Whereas, improper inputs could damage land quality, such as soil hardening and salinization. Experienced farmers could perceive the change of nutrients in the soil and thus adjust their land-use target, pattern, degree and input intensity based on it.

This study was conducted in 2015 in Sujiatun district, Shenyang city, Liaoning province. Based on the distance to the city centre of Sujiatun, as shown in Figure 2, and the soil sampling, Linhu street (suburb), Wanggangbao town (middle) and Yongle town (outer suburb) have also been selected for the following reasons: First, the study sites are located in the middle area of Liaohe Plain and Shenyang economic zone, where the conflict between cultivated land quality protection and socio-economic development is prominent. Second, the study sites are the main supply locations of vegetables and fruits for Shenyang city. Thus, cultivated land quality protection is important for farm product outputs and food security. Third, the study sites have been strongly affected by industrialization and urbanization [13]. Farmers in different areas are influenced by different socio-economic contexts, which would lead to different land-use behaviors and cultivated land quality status. As a result, the selection of study sites is representative.
After the selection of study sites, the field survey was conducted in July–August. Based on the town size, a number of villages and households were selected randomly in each town. Data were collected via a questionnaire which covered household characteristics, land-use behavior, and soil sampling.
Soil samples were collected during May–June (after soil thawing and before fertilization). At each plot, 15–20 surface soil samples at 0–20 cm depth were collected using the chessboard method. The soil samples were well blended, equally divided and put into four 20 × 15 cm plastic bags (1 kg each), which were labeled showing soil sample number, plot name, GPS location, the farmers’ names and addresses, and the date of collection.
A total of 240 questionnaires were collected. By excluding two invalid questionnaires, the sample was reduced to 238.

3.1. The Influencing Factors of Land-Use Behavior

3.2. The Impact of Land-Use Behavior on Land Quality

With regards to the influencing factors of land quality, the results shown in Table 2 indicate that farmers’ land-use behavior has a significant and positive effect, with the standardized coefficient valued at 0.773. In turn, land quality also imposes an effect on farmers’ land-use behavior, with the standardized coefficient valued at 0.247. In other words, while land quality could be largely improved by guiding farmers’ land-use behavior, it can also act back on famers’ land-use behavior. Moreover, as is shown in Table 3, the indirect and total effects of ‘urbanization→land-use behavior→land quality’ are both 0.717, implying that, with an urbanization increase of one unit, land quality would rise by 0.717.
For the three observable variables representing land-use behavior, the standardized coefficients for GCC and LII are 0.823 and 0.803, respectively. The positive effects of land-use behavior imply that farmland on which cash crop was grown and more capital input per unit of land was received is associated with higher soil quality. This is because, in the study sites, the planting of cash crops (vegetables, fruits) requires the application of base fertilizer (manure) which is beneficial to soil. The higher capital input means more chemical fertilizer inputs, which is also a good supplement to soil nutrient balances when it is applied appropriately.
The multiple cropping index, however, has a negative effect on land quality, as expected. Land that grows multiple crops indicates more intensified use. The more crops grown, the more nutrients, such as N, P and K, are absorbed, and this leads to land degradation. In addition, the diversity of planted crops (high MCI) may result in land fragmentation, which would affect fertilization negatively [30].
For the five observable variables representing land quality, AVN, AVP and AVK are mostly affected by farmers’ land-use behavior, with the standardized coefficient valued at 0.686, 0.887 and 0.756, respectively. The finding provides strong support in our conceptual framework that land-use behavior, especially inputs of N, P and K, may have the strongest and most direct effect on land quality. The influence of OM is relatively weak, though positive as well. This can be explained by the fact that, in our survey area, farmers paid little attention to input of organic fertilizer (such as manure), which leads to the excessive use of chemical fertilizers. As a result, the soil is acidized and the influence of pH value is negative.

H.L. and Y.Z. conceived and designed the experiments; H.L. collected and analyzed the data; Y.Z. and H.L. wrote the paper. 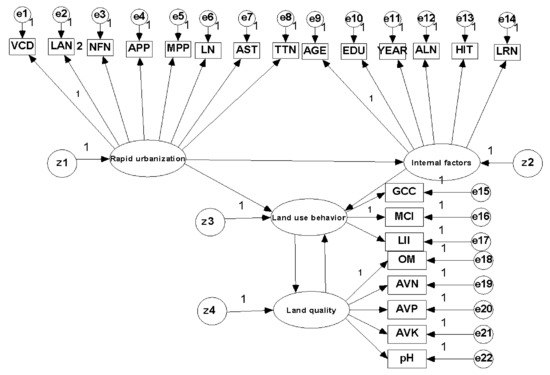