Dechloranes (Decs) have been widely found in the environment, even in the Tibetan Plateau and remote polar regions. However, the understanding of their regional distribution characteristics in polar regions is limited. To study the long-range atmospheric transport and fates of these emerging contaminants, Decs were analyzed in soil and lichen from the Fildes Peninsula in Antarctica. The concentrations of five Decs in soil and lichen ranged from 141.46 to 838.47 pg/g dw and 237.04 to 3599.18 pg/g dw, respectively. The mean fractions of anti-Dechlorane Plus (DP) (fanti) values estimated in the current soils (0.37) and lichen (0.24) were lower than those of commercial products (fanti = 0.64–0.80), which confirms that long-range atmospheric transport is a main source of DP, and the DP burdens could be driven by the accumulation of syn-DP. The average ΣDP concentration in soil in the coastal area was higher than that in the inland area and Ardley Island, while in lichen, the average DP concentration at the Ardley Island site was approximately three-fold higher than that in the coastal area and inland areas. This indicates that the distribution of DP was influenced by anthropogenic interference and animal activities in the Fildes Peninsula. The spatial variation of fanti of the three regions was clearer in soil than that in lichen. The fanti values were negatively correlated with DP concentrations in soil, suggesting that DP concentration levels play an important role in determining the isomeric composition of DP in the soil. View Full-Text
Keywords: dechloranes; stereo selection; soil; lichen; Fildes Peninsula dechloranes; stereo selection; soil; lichen; Fildes Peninsula
►▼ Show Figures 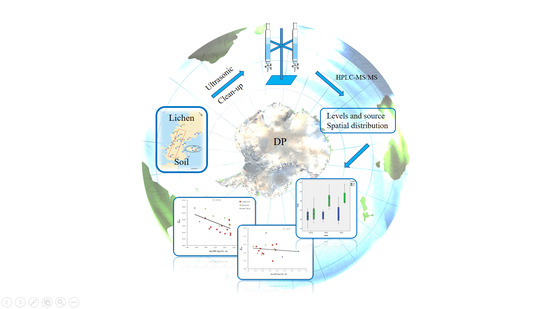