Determinants of Risk Perception Related to Exposure to Endocrine Disruptors during Pregnancy: A Qualitative and Quantitative Study on French Women

Endocrine disruptors (EDCs) are known as environmental exposure factors. However, they are rarely reported by health professionals in clinical practice, particularly during pregnancy, even though they are associated with many deleterious consequences. The objectives of this study were to estimate the risk perception of pregnant women related to EDC exposure and to evaluate its determinants. A qualitative study based on the Health Belief Model was carried out through interviews of pregnant women and focus group with perinatal, environmental health and prevention professionals in 2015 in the city of Poitiers, France. Then, determinants of risk perception were included in a questionnaire administered to 300 women in the perinatal period through a quantitative study. Scores were subsequently calculated. Perception of EDC risk was defined as perceived severity for different stages of the infant’s development and perceived susceptibility to EDC exposure. The determinants reported in the qualitative study were: age, strong maternal figure, socio-professional category, level of knowledge, and involuntariness of exposure. Age and level of knowledge were confirmed in our statistical model as determinants. Mean score of EDC risk perception was 55.0 ± 18.3 on 100 points. Our study should guide healthcare providers when advising pregnant women about EDC and environmental exposure. Our score for perceived EDC risk and assessment of its known determinants may help to assess the impact and the relevance of prevention programs dedicated to reducing exposure to EDC during pregnancy. View Full-Text
Keywords: endocrine disruptor; risk perception; exposure; pregnancy endocrine disruptor; risk perception; exposure; pregnancy
►▼ Show Figures 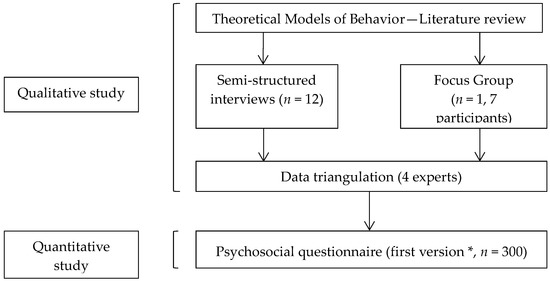