Bisphenol A and Metabolic Diseases: Challenges for Occupational Medicine

The prevalence of metabolic diseases has markedly increased worldwide during the last few decades. Lifestyle factors (physical activity, energy-dense diets), together with a genetic predisposition, are well known factors in the pathophysiology of health problems. Bisphenol A (BPA) is a chemical compound used for polycarbonate plastics, food containers, epoxy resins coating metallic cans for food and beverage conservation. The ability of BPA to act as an endocrine disruptor—xenoestrogen in particular—is largely documented in literature, with numerous publications of in vivo and in vitro studies as well as epidemiological data on humans. Recently, different researchers studied the involvement of BPA in the development of insulin resistance; evidences in this way showed a potential role in etiology of metabolic disease, both for children and for adults. We review the epidemiological literature in the relation between BPA exposure and the risk of metabolic diseases in adults, with a focus on occupational exposure. Considering published data and the role of occupational physicians in promoting Workers’ Health, specific situations of exposure to BPA in workplace are described, and proposals for action to be taken are suggested. The comparison of the studies showed that exposure levels were higher in workers than in the general population, even if, sometimes, the measurement units used did not permit rapid comprehension. Nevertheless, occupational medicine focus on reproductive effects and not metabolic ones. View Full-Text
Keywords: bisphenol A; obesity; diabetes; workers bisphenol A; obesity; diabetes; workers
►▼ Show Figures 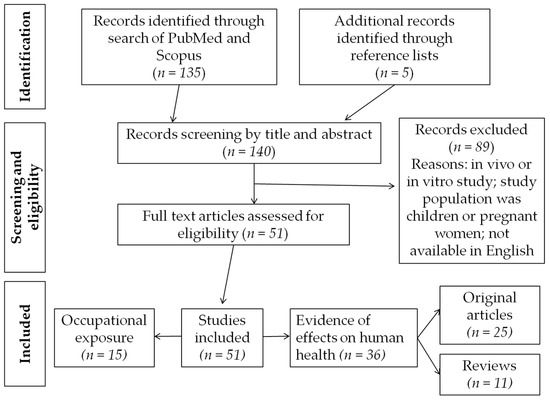