The Relationship between Obesity and Urban Environment in Seoul

The influence of comorbidities and worse physical status on mortality following total hip replacement (THR) leads to the idea that patient-reported health status may also be a predictor of mortality. The aim of this study was to investigate the relationship between patient-reported health status before THR and the risk of dying up to 5 years post-operatively. For these analyses, we used register data on 42,862 THR patients with primary hip osteoarthritis operated between 2008 and 2012. The relative survival ratio was calculated by dividing the observed survival in the patient group by age- and sex-adjusted expected survival of the general population. Pre-operative responses to the five EQ-5D-3L (EuroQol Group) dimensions along with age, sex, education status, year of surgery, and hospital type were used as independent variables. Results shown that, as a group, THR patients had a better survival than the general population. Broken down by the five EQ-5D-3L dimensions we observed differentiated survival patters. For all dimensions, those reporting extreme problems had higher mortality than those reporting moderate or no problems. In conclusion, worse health status according to the EQ-5-3L before THR is associated with higher mortality up to five years after surgery. EQ-5D-3L responses may be useful in a multifactorial individualized risk assessment before THR. View Full-Text
Keywords: total hip replacement; PROMs; EQ-5D; mortality; register total hip replacement; PROMs; EQ-5D; mortality; register
►▼ Show Figures 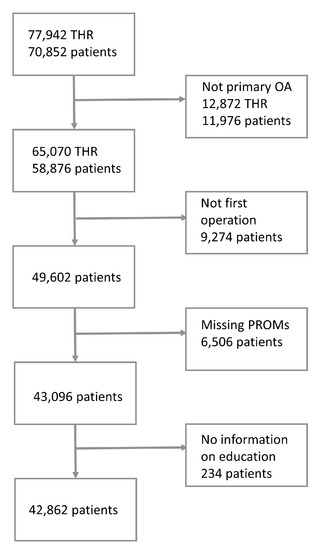