The Burden of Suicide in Rural Bangladesh: Magnitude and Risk Factors
Previous Article in Journal

Impact of First Aid on Treatment Outcomes for Non-Fatal Injuries in Rural Bangladesh: Findings from an Injury and Demographic Census

Globally, falls are the second leading cause of unintentional injury deaths, with 80% occurring in low-and middle-income countries. The overall objective of this study is to describe the burden and risk factors of falls in rural Bangladesh. In 2013, a large household survey covering a population of 1,169,593 was conducted in seven rural sub-districts of Bangladesh to assess the burden of all injuries, including falls. The recall periods for non-fatal and fatal injuries were six and 12 months, respectively. Descriptive, bivariate and multiple logistic regression analyses were conducted. The rates of non-fatal and fatal falls were 36.3 per 1000 and 5 per 100,000 population, respectively. The rates of both fatal and non-fatal falls were highest among the elderly. The risk of non-fatal falls was higher at extremes of age. Lower limb and waist injuries were frequent following a fall. Head injuries were frequent among infants (35%), while lower limb and waist injuries were frequent among the elderly (>65 years old). Injuries to all body parts (except the waist) were most frequent among men. More than half of all non-fatal falls occurred in a home environment. The injury patterns and risk factors of non-fatal falls differ by sociodemographic factors. View Full-Text
Keywords: injury; fall injury; Bangladesh; LMICs injury; fall injury; Bangladesh; LMICs
►▼ Show Figures 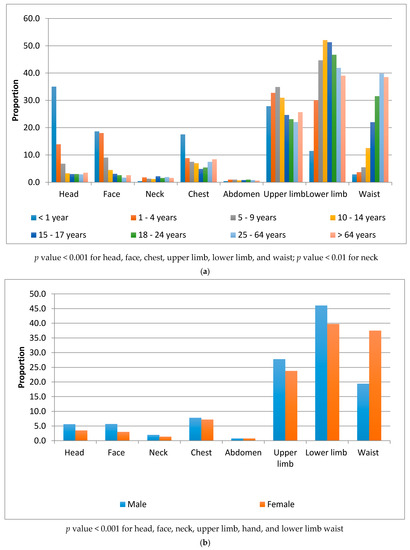