Factors Associated with Activities of Daily Life Disability among Centenarians in Rural Chongqing, China: A Cross-Sectional Study
Next Article in Special Issue

Chronic Stress in Young German Adults: Who Is Affected? A Prospective Cohort Study

Stress may contribute to illness through the impaired recovery or sustained activity of stress-responsive biological systems. Rumination, or mental rehearsal of past stressors, may alter the body’s stress-responsive systems by amplifying and prolonging exposure to physiological mediators, such as cortisol. The primary aim of the current investigation was to test the extent to which the tendency to ruminate on stress predicts diminished diurnal cortisol recovery (i.e., elevated evening cortisol) in a sample of sexual and gender minority young adults. Participants included 58 lesbian, gay, bisexual, and transgender young adults (Mage = 25.0, SD = 4.1) who completed an initial online survey that assessed trait rumination and current depressed mood. Participants completed daily evening questionnaires and provided salivary cortisol samples at wake, 45 min post-wake, 12 h post-wake, and at bedtime over seven consecutive days. Trait rumination predicted significantly higher cortisol concentrations at bedtime, but was unrelated to other cortisol indices (e.g., morning cortisol, diurnal slope, total output). The association with trait rumination was not accounted for by daily negative affect, and was largely independent of depressed mood. These results have implications for identifying and treating those who may be at risk for impaired diurnal cortisol recovery and associated negative health outcomes. View Full-Text
Keywords: rumination; cortisol; stress; recovery; sexual and gender minority; depressed mood rumination; cortisol; stress; recovery; sexual and gender minority; depressed mood
►▼ Show Figures 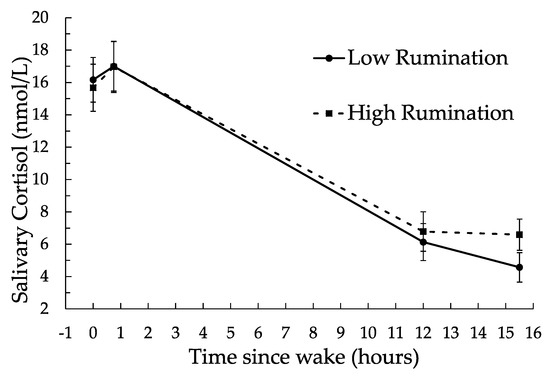