Ethnicity and religion are known to be important factors associated with substance use and misuse (SUM). Ethnic Bosniaks, Muslims by religion, are the third largest ethnic group in the territory of the former Yugoslavia, but no study has examined SUM patterns among them. The aim of this study was to explore the prevalence of SUM and to examine scholastic-, familial- and sport-factors associated with SUM in adolescent Bosniaks from Bosnia-and-Herzegovina. The sample comprised 970 17-to-18-year-old adolescents (48% boys). Testing was performed using an previously validated questionnaire investigating socio-demographic-factors, scholastic-variables, and sport-factors, cigarette smoking, alcohol drinking, simultaneous smoking and drinking (multiple SUM), and the consumption of other drugs. The 30% of boys and 32% of girls smoke (OR = 1.13; 95% CI = 0.86–1.49), 41% of boys and 27% of girls are defined as harmful alcohol drinkers (OR = 1.94; 95% CI = 1.48–2.54), multiple SUM is prevalent in 17% of boys and 15% of girls (OR = 1.11; 95% CI = 0.79–1.56), while the consumption of other drugs, including sedatives, is higher in girls (6% and 15% for boys and girls, respectively; OR = 2.98; 95% CI = 1.89–4.70). Scholastic achievement is negatively associated with SUM. SUM is more prevalent in those girls who report higher income, and boys who report a worse familial financial situation. The study revealed more negative than positive associations between sport participation and SUM, especially among girls. Results can help public health authorities to develop more effective prevention campaign against SUM in adolescence. View Full-Text
Keywords: substance misuse; puberty; academic achievement; parental monitoring; sport participation substance misuse; puberty; academic achievement; parental monitoring; sport participation
►▼ Show Figures 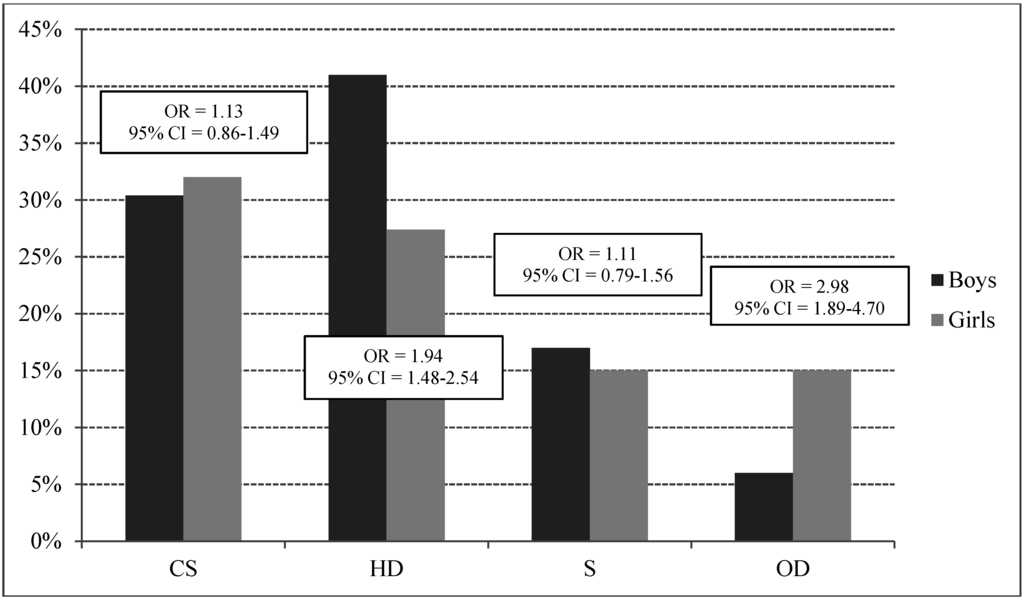