Monitoring of the Environment at the Transplant Unit—Hemato-Oncology Clinic

:
Cigarette smoking is one of the most significant public health issues and the most common environmental cause of preventable cancer deaths worldwide. EGFR (Epidermal Growth Factor Receptor)-targeted therapy has been used in the treatment of LC (lung cancer), mainly caused by the carcinogens in cigarette smoke, with variable success. Presence of mutations in the KRAS (Kirsten rat sarcoma viral oncogene homolog) driver oncogene may confer worse prognosis and resistance to treatment for reasons not fully understood. NQO1 (NAD(P)H:quinone oxidoreductase), also known as DT-diaphorase, is a major regulator of oxidative stress and activator of mitomycins, compounds that have been targeted in over 600 pre-clinical trials for treatment of LC. We sequenced KRAS and investigated expression of NQO1 and five clinically relevant proteins (DNMT1, DNMT3a, ERK1/2, c-MET, and survivin) in 108 patients with non-small cell lung carcinoma (NSCLC). NQO1, ERK1/2, DNMT1, and DNMT3a but not c-MET and survivin expression was significantly more frequent in patients with KRAS mutations than those without, suggesting the following: (1) oxidative stress may play an important role in the pathogenesis, worse prognosis, and resistance to treatment reported in NSCLC patients with KRAS mutations, (2) selecting patients based on their KRAS mutational status for future clinical trials may increase success rate, and (3) since oxidation of nucleotides also specifically induces transversion mutations, the high rate of KRAS transversions in lung cancer patients may partly be due to the increased oxidative stress in addition to the known carcinogens in cigarette smoke.
Keywords:
lung cancer; non-small cell lung carcinoma; oxidative stress; KRAS; mutation; NQO1; DNA methyl transferase; ERK1/2; c-MET; survivin

Cigarette smoking, the main cause of lung cancer, has remained as one of the most significant public health issues [1,2]. Lung cancer is the most frequent cause of cancer deaths worldwide [3]. It comprises approximately 18.2% of all cancer deaths, causing nearly as many deaths as breast, prostate, and colon cancers combined [3]. Although EGFR-directed therapy has been used for treatment with variable success, it may be less effective in patients carrying mutations in KRAS [4].
KRAS is a driver oncogene encoding for a small GTPase [5]. It activates proteins such as RAF, MEK, and ERK1/2 involved in the MAPK/ERK signal transduction pathway in response to extracellular signals received by the EGFR [6], (Figure 1). Mutations in KRAS result in the loss of its GTPase activity and constitutive activation of the downstream proteins, resulting in malignant transformation [7].
An interesting feature of the KRAS mutations in smokers is the high incidence of G:C > A:T transversions [8]. Previous studies have shown that NNK (4-(N-Methyl-N-nitrosamino)-1-(3-pyridyl)-1-butanone), the carcinogen found in cigarette smoke, is one of the causes of these transversion mutations [9]. Interestingly, DNA replication involving 8-OHdG, the product of oxidation of guanosine, also produces the G:C > A:T transversion mutations [10]. Increased transversion rates in smokers, thus, may not only be due to the NNK but also increased oxidative stress (OS) in lung cancer cells, suggesting that there may be a link between oxidative stress and KRAS mutational status.
NQO1 (NAD(P)H:quinone oxidoreductase, also known as DT-diaphorase) is a major regulator of oxidative stress that links oxidative stress and tumorogenesis by stabilizing the tumor suppressor TP53 [11]. Its overexpression in the tumor but not normal tissue has made it an attractive target for treatment of lung cancer [12]. NQO1 is the main activator of quinone-containing alkylating agents such as mitomycins.
To our knowledge, possible associations between NQO1 expression and KRAS mutational status have been rarely investigated in the literature. As of February 2014, entering “KRAS” and “NQO1” into the PubMed database [13] returned only one relevant study that investigated modulation of RAS (rat sarcoma viral oncogene homolog) mutations by NQO1 [14]. Our objective was to sequence KRAS and compare expression of NQO1 as well as a panel of five clinically relevant proteins in 108 non-small cell lung carcinoma (NSCLC), the most common form of LC, patients with and without KRAS mutations. The panel included survivin (a potent inhibitor of apoptosis), DNMT1 (the maintenance methylator of DNA), DNMT3a (the enzyme ensuring accurate inheritance of the maternal methylation patterns), ERK1/2 (downstream targets of KRAS), and c-MET (an oncogene important in the transformation of cells with KRAS mutations). 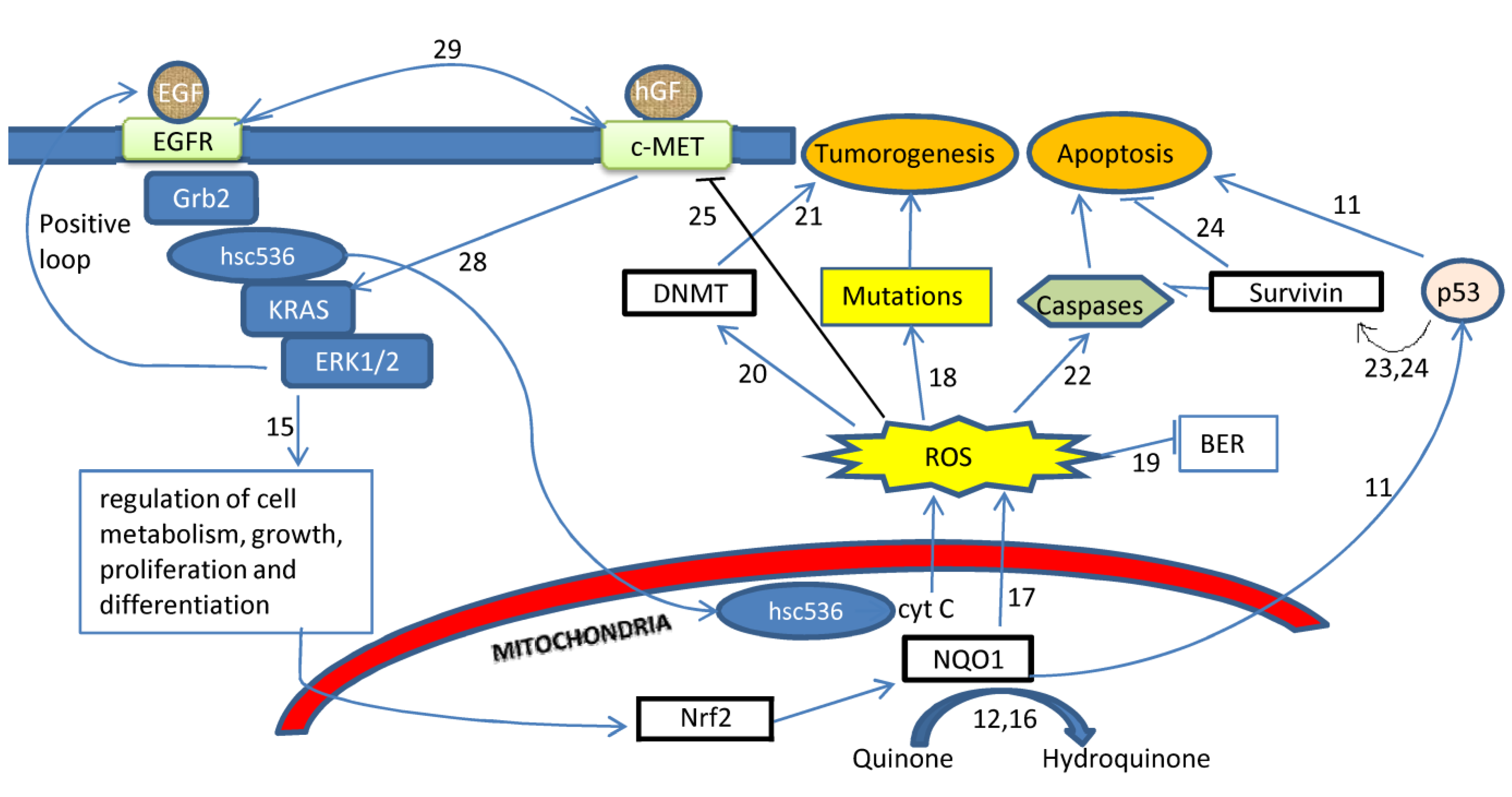 a See the list of references for literature cited. b Activating mutations in KRAS results in increased cellular growth, metabolism, and proliferation [15]. The reactive oxygen species (ROS) produced during metabolic processes are normally converted into harmless products by antioxidant enzymes such as NQO1 [12,16] which stabilizes the tumor suppressor TP53 [11]. However, when the capacity of NQO1 and other antioxidant enzymes is overwhelmed, the ROS may “leak out” of the mitochondria [17] and oxidize DNA bases, creating mutations [18]. Oxidative stress may repress base excision repair systems, which may result in additional mutations [19]. ROS may increase DNA methyl transferase activity [20], which may be an early event in lung carcinogenesis [21]. ROS regulate apoptosis via upregulation of caspases [22]. Survivin, a caspase inhibitor, also regulated by DNMTs and TP53, may decrease effects of ROS by inhibiting apoptosis [23,24]. Oxidative stress inhibits expression of c-MET, an oncogene altered in many cancers [25,26,27]. c-MET regulates oncogenic transformation of the lung cancers associated with KRAS mutations [28]. Co-activation of c-MET and EGFR is seen in a subset of lung cancers with distinct expression profile, mutational spectrum, and response to chemotherapy [29].

In total, 52 of the 108 (48.1%) patients included in this study had mutations in KRAS. Of the mutations, 73.1% (38/52) were transversions and the remaining were transitions. All of the mutations originated from the guanosine nucleotide.
Average age at diagnosis was 61.0 (8.9) years (Supplemental Table S1). Male gender, smoking history, hypertension, and family cancer history were present in over half of all patients. Smoking history was present in 44 of the 48 patients (91.7%) with KRAS mutations.
Immunohistochemistry (IHC) results showed that NQO1, DNMT1, DNMT3a, and ERK1/2 but not survivin and c-MET expression were more frequent in patients carrying mutations in KRAS than those carrying the wild type (Table 1). When the KRAS mutational status was ignored, expression of the following proteins was present in over half of the NSCLC patients (percentage of patients with positive expression of the protein in parenthesis): NQO1 (67.8%), survivin (75%), DNMT1 (74.6%), and c-MET (68.9%). DNMT3a and ERK1/2 expression, on the other hand, were detected in less than half of the patients (i.e., 43.3% and 46.2%, respectively).
Table 1. Expression of NQO1 and clinically relevant proteins in non-small cell lung carcinoma patients with and without KRAS mutations.
a IHC = results of the immunohistochemical staining. b Values in these columns represent numbers of patients with positive or negative immunohistochemical staining. c An asterisk “*” denotes statistical significance at P = 0.05.

The samples included in this study were obtained from 108 NSCLC patients treated at the Ohio State University Wexner Medical Center in Columbus, OH, USA. DNA was isolated using QiaAmp Micro DNA kits from Qiagen Inc. (Valencia, CA, USA). The tissue samples resected after surgery were embedded in paraffin, fixed in formalin, and archived until analyzed. We used a semi-nested Polymerase Chain Reaction (PCR) assay followed by direct sequencing to identify KRAS mutations in codons 12 and 13. The forward 5’-TACTGGTGGAGTATTTGATAGTG-3’ and reverse 5’-CTGTATCAAAGAATGGTCCTG-3’ primers were used in the first round of PCR. In the second round of PCR, the forward 5’-TGTAAAACGGCCAGTTAGTGTATTAACCTTATGTG-3’ and reverse 5’-CAGGAAACAGCTATGACCACCTCTATTGTTGGATCATATTCG-3’ primers were used. The PCR conditions (95 °C for 15 min, 30 cycles of 94 °C for 30 s, 48 °C for 30 s, and 72 ° C for 30 s, followed by an extension step of seven minutes at 72 °C) were used in both rounds of PCR except that the annealing temperature was raised to 58 °C in the second round. Fluorescence-based capillary electrophoresis was used in an ABI3130XL genetic analyzer to detect the mutations.
To perform IHC, tissue blocks were cut at four micron thickness and placed on positively charged slides. Slides with sections were placed in a 60 °C oven for one hour and then cooled. The samples were deparaffinized and rehydrated through two changes of O-xylene for 5 min each and 10–20 dips in graded ethanol solutions. The slides were quenched for five minutes in 3% H2O2 solution in water to block endogenous peroxidases. To perform antigen retrieval, the slides were placed in Target Retrieval Solution (Dako, CA, USA) for 25 min at 96 °C in a vegetable steamer (Black & Decker, IL, USA) and cooled for 15 min in solution. Slides were processed using a Dako Autostainer Immunostaining System following manufacturer’s instructions. Initially, slides were blocked with serum-free protein (Dako) for 15 min. The primary antibodies were diluted at proportions given in Supplemental Table S2 and incubated for one hour. Detection systems described in Supplemental Table S2 were used. Staining was visualized after incubation with DAB+ chromogen (Dako) for five minutes. The slides were then counterstained in hematoxylin, dehydrated through graded ethanol solutions and coverslipped. Representative IHC images are provided in Figure 2.
IHC scores were obtained using Allred scoring system which combines the percentage of positive cells and the intensity of the reaction products in the carcinoma [51]. Proportion score has six possible values based on percentage of positive cells (in parentheses): 0 (0%), 1 (<1%), 2 (1%–10%),3 (11%–33%), 4 (34%–66%), and 5 (>67%). Intensity score has four possible values (with level of intensity in parentheses): 0 (none), 1 (weak), 2 (intermediate), and 3 (strong). The proportion and intensity scores are added to obtain the final Allred scores that range from 0 to 8. We reported samples with the final Allred scores 0, 1, and 2 as negative and those with scores 3 or higher as positive. Statistical analysis was performed using the chi-square or Fisher’s exact test for categorical variables and the F-test for continuous variables with the significance level set at P = 0.05.

The authors wish to thank all the medical staff at The Ohio State University Medical Center for providing excellent patient care and resources for conducting medical research.