The Antinociceptive and Anti-Inflammatory Activities of Caulerpin, a Bisindole Alkaloid Isolated from Seaweeds of the Genus Caulerpa
Next Article in Special Issue

Total Synthesis and Absolute Configuration of the Marine Norditerpenoid Xestenone

by Donna D’Souza-Ticlo 1, Sandeep Garg 2 and

Laccases (benzenediol: oxygen oxidoreductase, EC 1.10.3.2) are multi-copper containing enzymes which reduce molecular oxygen to water and simultaneously perform one electron oxidation of various aromatic substrates [1]. This broad substrate specificity of laccase has resulted in a large number of biotechnological applications. These include the decolorization and detoxification of textile dyes and effluents, pulp delignification, removal of phenolics from wines and other beverages, transformation of antibiotics, steroids and many aromatic compounds [2].
Laccases from marine sources with thermo- and halo-tolerance have potential in bioremediation of wastewaters with high pH and salt content. A marine-derived basidiomycete Cerrena unicolor MTCC 5159 isolated from decaying mangrove wood was found to produce a large number of laccase isoforms of which, at least one of them was thermostable, halotolerant and heavily glycosylated [3]. These laccases decolorized several dyes and effluents [4]. Considering the bioremediation potential of these laccases, we have attempted to study the medium components that affect their production and whether these affect laccase production in the marine-derived fungus differently when grown in a distilled water medium.
Classical methods that use sequential manipulation of a single parameter do not take into consideration the interactions between different factors. Moreover, they are work and time exhaustive. Response surface methodology has eliminated these drawbacks. It can also be used to evaluate the relative significance of several variables simultaneously [5]. The aim of this study was to apply the Plackett Burman Design (PBD), to determine which medium components had the most significant effect on laccase titer and the Central-Composite Design (CCD) to determine the interactions of these significant components. Some major variables affecting laccase and biomass production were separately investigated.

A marine-derived basidiomycete Cerrena unicolor MTCC 5159 was used as the laccase source. It was maintained on Boyd & Kohlmeyer agar [34] prepared in half-strength sea water. The seed culture was developed by inoculating pieces of fungus in a low nitrogen mineral liquid medium [35]. This was kept under stationary conditions for 7 days at 30 °C. The mycelium was homogenized in Omni Macro-homogenizer (Model No. 17505, Marietta, GA, USA) for 5 s and this suspension was used as the inoculum. One mL inoculum (5% v/v) was transferred to Erlenmeyer flasks (250 mL) containing 20 mL of the culture medium and incubated at 30 °C under static conditions.

Screening of medium components was carried out using the PBD to determine their effect on biomass and laccase production. The five components used included glucose (carbon), NH4Cl (nitrogen), CuSO4 (inducer), Tween 80 (surfactant) and NaCl (salt). Low and high settings of each of these components were used to prepare a combination of eight Trials of the culture medium (Table 1). Inoculation was carried out using 5% (v/v) inoculum. An additional set of experiments was carried out with a Cu spike (0.375 mM) on day 6 of growth. Both sets of experiments were monitored every 3 days from the day of inoculation until day 15.

Plackett Burman Design was used to determine the significance of each of the medium components on biomass and laccase production. Table 1 represents the low and high settings for the five medium components under testing. A linear approach is considered sufficient for screening for the effects of these components: Where Y is the estimated biomass or laccase production and βi is the regression coefficient.
The CCD was used to study the interactions between glucose (carbon) and NH4Cl (nitrogen). Table 5 represents the coded and uncoded variables for the two experimental variables. The design of the experiment along with the predicted and experimental values for laccase and biomass production is given in Table 5. For both, the screening and interaction studies, various measurements for each experimental set were carried out in triplicates. Each experimental set was carried out in duplicate. The yields reported are the mean of the duplicates. The relationship of the independent variables (A & B) and their response estimated (Y) as biomass or laccase production, were calculated by the second order polynomial equation: Where β0 is the constant coefficient, β1 and β2 are the linear coefficients; β11 and β22 are the quadratic coefficients whereas β12 is second order interaction coefficient. The statistical analysis using multiple regressions and MANOVA were performed with Statistica v 6.0 (StatSoft, Tulsa, Okla) software package.

Fungal biomass was estimated as dry weight. The mycelium was rinsed with distilled water and filtered through pre-weighed Whatman No.1 filter paper. This was dried in an oven until a constant weight was achieved. The difference in weight was considered as the mycelial dry weight and expressed as gram fungal dry weight per liter of medium (g L−1).
Laccase activity was estimated by measuring the rate of oxidation of ABTS spectrophotometrically using UV-Vis 2450 spectrophotometer (Shimadzu, Japan) [36]. Laccase present in the culture filtrate reacted with 1 mM ABTS prepared in glycine-HCl buffer (0.2 M; pH 3) to produce a green colored compound. The rate of formation of this product was measured spectrophotometrically at 405 nm at 60 °C, since the optimum pH and temperature for laccase assay were found to be 3 and 60 °C respectively [4]. Laccase activity was expressed in units, which is defined as 1 μmol of product formed per min per liter of culture filtrate (U L−1). Protein concentration was determined using the Bradford method [37] at 30 °C and expressed as gram protein per liter of culture filtrate (g L−1).

We are grateful to Director, National Institute of Oceanography, for valuable support and encouragement. Donna D’Souza-Ticlo is thankful to the Council of Scientific and Industrial Research (CSIR) for a Senior Research Fellowship. Raghukumar wishes to thank CSIR, New Delhi for the Grant–In-Aid Scheme No. 21 (0649)/06/EMR-II under which this work was carried out. The authors also acknowledge S.G. Dalal for his help in the statistical analysis. NIO’s contribution number is 4641. 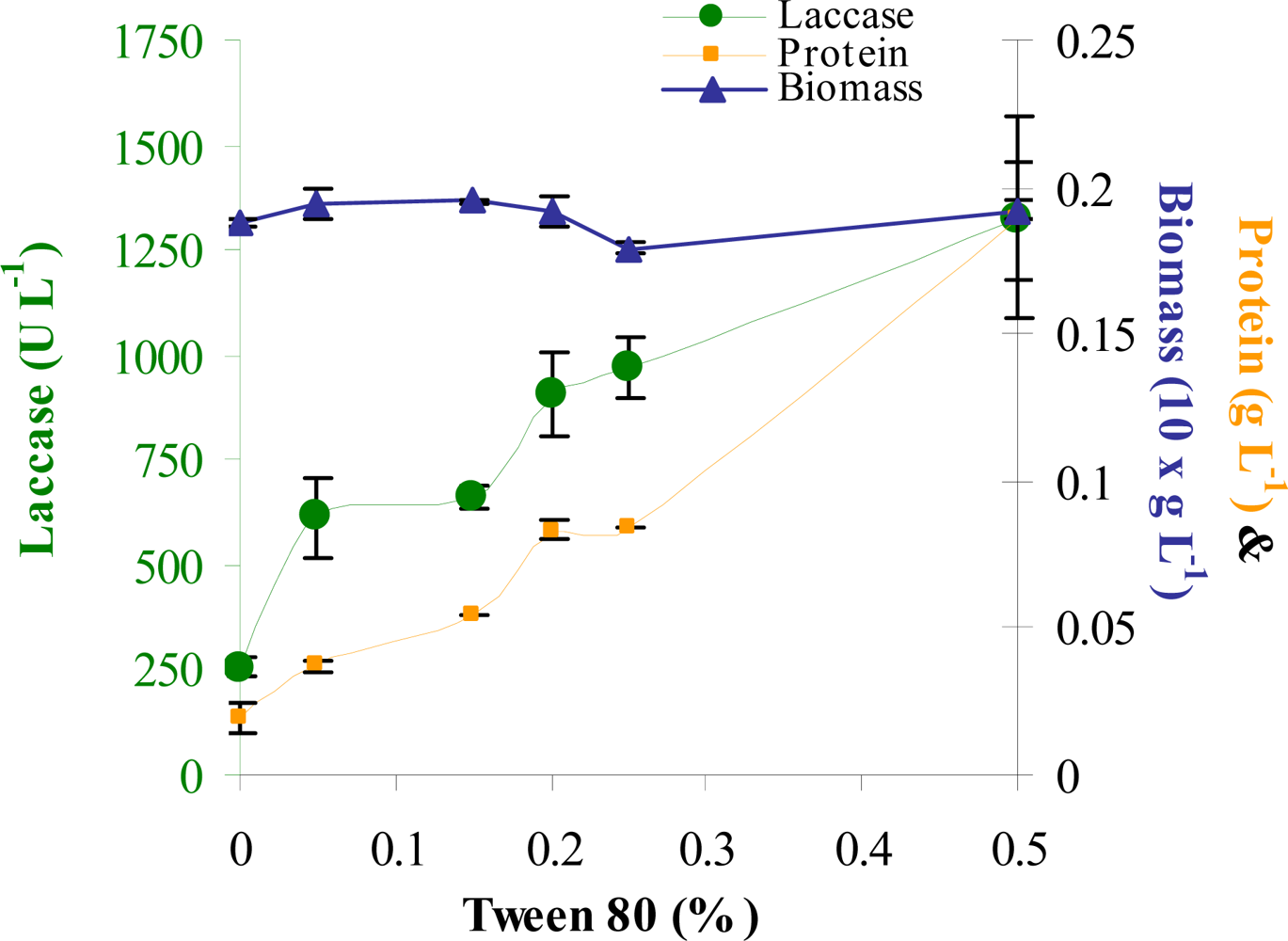 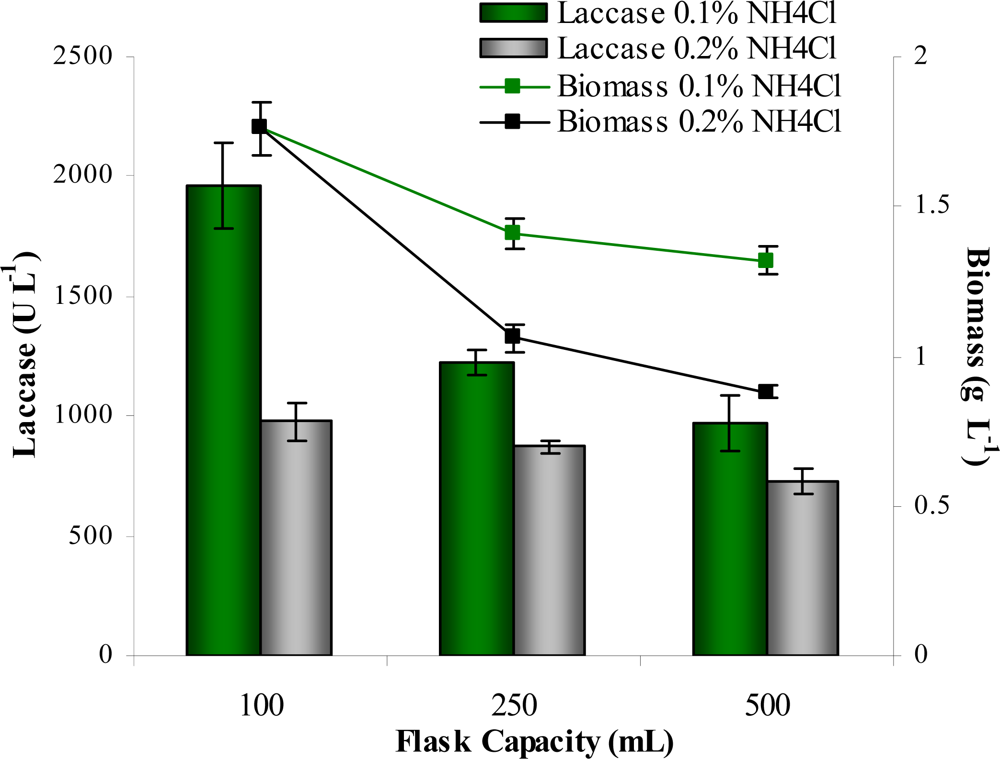 Table 1. Distribution of the low and high settings for each of the five variables with the coded and uncoded values in eight experimental Trials of the Plackett Burman Design.
The higher concentration of the variable is represented by + and the lower concentration by −.

Table 3. Degree of positive and negative effects of medium components on biomass production according to the Plackett Burman Design.
Main effects (B) i.e., biomass production (g L−1) and standard error of B for uncoded values. p-level is equivalent to 0.05%. S.E.E = Standard Error of Estimate.

Table 4. Degree of positive and negative effects of medium components on laccase production according to the Plackett Burman Design.
Main effects (B) i.e laccase production (U L−1); standard error of B for uncoded values. p-level is equivalent to 0.05%. S.E.E = Standard Error of Estimate.

Table 5. Central Composite Design matrix with coded and uncoded values chosen for glucose and NH4Cl with the experimental, predicted and residual values for biomass and laccase production.

© 2009 by the authors; licensee Molecular Diversity Preservation International, Basel, Switzerland This article is an open-access article distributed under the terms and conditions of the Creative Commons Attribution license (http://creativecommons.org/licenses/by/3.0/).