The endemic brown macroalga Fucus virsoides J. Agardh from the Adriatic Sea was in the focus of the present research. The volatiles of fresh (FrFv) and air-dried (DrFv) samples of F. virsoides obtained by headspace solid-phase microextraction (HS-SPME) and hydrodistillation (HD) were analyzed by gas chromatography equipped with flame ionization detector and mass spectrometry (GC-FID/MS). The major HS-FrFv compound was pentadecane (61.90–71.55%) followed by pentadec-1-ene (11.00–7.98%). In HS-DrFv, pentadec-1-ene was not present, and few lower aliphatic compounds appeared, as well as benzaldehyde and benzyl alcohol. In HD-FrFv, particularly abundant were alkenes (such as pentadec-1-ene (19.32%), or (E)-pentadec-7-ene (8.35%)). In HD-DrFv, more oxidation products were present (e.g., carbonyl compounds such as tridecanal (18.51%)). The fatty acids profile of freeze-dried sample (FdFv) after conversion to methyl esters was determined by GC-FID, and oleic acid was dominant (42.28%), followed by arachidonic acid (15.00%). High-performance liquid chromatography-high-resolution mass spectrometry with electrospray ionization (HPLC-ESI-HRMS) was used for the screening of less polar fractions (F3 and F4) of F. virsoides. Mono- and diglycerides of stearic, palmitic, oleic, and arachidonic acids were found. Terpenoids and steroids comprised the compounds C20H30(32)O2 and C29H48O(2). Among carotenoids, fucoxanthin was identified. Chlorophyll derivatives were also found (C55H74(72)N4O(5-7)), dominated by pheophytin a. The antioxidant activity of the fractions was investigated by in vitro assays (oxygen radical absorbance capacity (ORAC), reduction of radical cation (ABTS•+), 2,2-diphenyl-1-picryl-hydrazyl-hydrate (DPPH) assay, and ferric reducing antioxidant power (FRAP)) and by in vivo zebrafish model (along with fish embryotoxicity). In vitro experiments proved good radical scavenging abilities of F3 and F4 fractions, which were additionally supported by the protective effect against hydrogen peroxide-induced oxidative stress in zebrafish embryos. View Full-Text
Keywords: brown algae; volatiles; fatty acids; pigments; bioassays; embryotoxicity; reactive oxygen species brown algae; volatiles; fatty acids; pigments; bioassays; embryotoxicity; reactive oxygen species
►▼ Show Figures 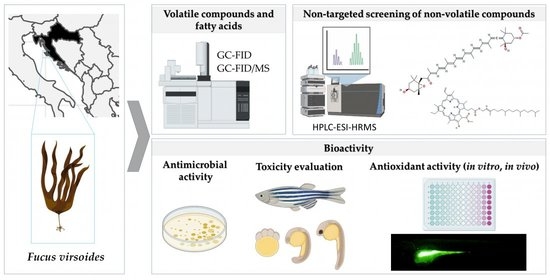