LC–HRMS and Chemical Derivatization Strategies for the Structure Elucidation of Caribbean Ciguatoxins: Identification of C-CTX-3 and -4
Next Article in Special Issue

Uncovering the Core Microbiome and Distribution of Palmerolide in Synoicum adareanum Across the Anvers Island Archipelago, Antarctica
Previous Article in Journal

Sea cucumbers are bottom dwelling invertebrates, which are mostly found on subtropical and tropical sea grass beds, sandy reef flats, or reef slopes. Although constantly exposed to fouling communities in these habitats, many species are surprisingly free of invertebrate epibionts and microfouling algae such as diatoms. In our study, we investigated the anti-fouling (AF) activities of different crude extracts of tropical Indo-Pacific sea cucumber species against the fouling diatom Cylindrotheca closterium. Nine sea cucumber species from three genera (i.e., Holothuria, Bohadschia, Actinopyga) were selected and extracted to assess their AF activities. To verify whether the sea cucumber characteristic triterpene glycosides were responsible for the observed potent AF activities, we tested purified fractions enriched in saponins isolated from Bohadschia argus, representing one of the most active anti-fouling extracts. Saponins were quantified by vanillin-sulfuric acid colorimetric assays and identified by LC-MS and LC-MS/MS analyses. We were able to demonstrate that AF activities in sea cucumber extracts were species-specific, and growth inhibition as well as attachment of the diatom to surfaces is dependent on the saponin concentration (i.e., Actinopyga contained the highest quantities), as well as on the molecular composition and structure of the present saponins (i.e., Bivittoside D derivative was the most bioactive compound). In conclusion, the here performed AF assay represents a promising and fast method for selecting the most promising bioactive organism as well as for identifying novel compounds with potent AF activities for the discovery of potentially novel pharmacologically active natural products. View Full-Text
Keywords: holothurian; diatom; anti-fouling compounds; marine natural products; saponins; triterpene glycosides; mass spectrometry holothurian; diatom; anti-fouling compounds; marine natural products; saponins; triterpene glycosides; mass spectrometry
►▼ Show Figures 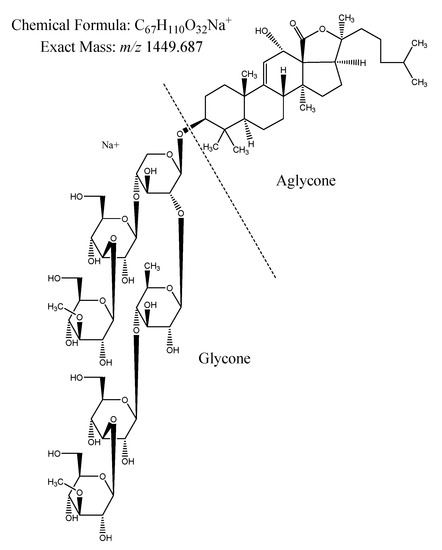