Synthesis, Pharmacological and Structural Characterization of Novel Conopressins from Conus miliaris
Next Article in Special Issue

Investigating the Antiparasitic Potential of the Marine Sesquiterpene Avarone, Its Reduced Form Avarol, and the Novel Semisynthetic Thiazinoquinone Analogue Thiazoavarone

In recent years, there has been a revival of interest in phenotypic-based drug discovery (PDD) due to target-based drug discovery (TDD) falling below expectations. Both PDD and TDD have their unique advantages and should be used as complementary methods in drug discovery. The PhenoTarget approach combines the strengths of the PDD and TDD approaches. Phenotypic screening is conducted initially to detect cellular active components and the hits are then screened against a panel of putative targets. This PhenoTarget protocol can be equally applied to pure compound libraries as well as natural product fractions. Here we described the use of the PhenoTarget approach to identify an anti-tuberculosis lead compound. Fractions from Polycarpa aurata were identified with activity against Mycobacterium tuberculosis H37Rv. Native magnetic resonance mass spectrometry (MRMS) against a panel of 37 proteins from Mycobacterium proteomes showed that a fraction from a 95% ethanol re-extraction specifically formed a protein-ligand complex with Rv1466, a putative uncharacterized Mycobacterium tuberculosis protein. The natural product responsible was isolated and characterized to be polycarpine. The molecular weight of the ligand bound to Rv1466, 233 Da, was half the molecular weight of polycarpine less one proton, indicating that polycarpine formed a covalent bond with Rv1466. View Full-Text
Keywords: PhenoTarget approach; MRMS; protein-ligand complex; polycarpine PhenoTarget approach; MRMS; protein-ligand complex; polycarpine
►▼ Show Figures 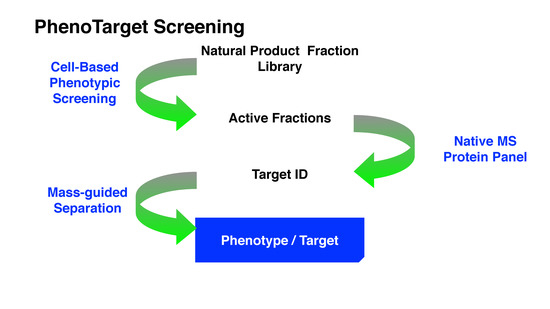