Omega-3 long-chain polyunsaturated fatty acids (LC-PUFAs), such as eicosapentaenoic acid (EPA) (20:5n-3) and docosahexaenoic acid (DHA) (22:6n-3), are considered essential for human health. Microorganisms are the primary producers of omega-3 fatty acids in marine ecosystems, representing a sustainable source of these lipids, as an alternative to the fish industry. Some marine bacteria can produce LC-PUFAs de novo via the Polyunsaturated Fatty Acid (Pfa) synthase/ Polyketide Synthase (PKS) pathway, which does not require desaturation and elongation of saturated fatty acids. Cultivation-independent surveys have revealed that the diversity of microorganisms harboring a molecular marker of the pfa gene cluster (i.e., pfaA-KS domain) is high and their potential distribution in marine systems is widespread, from surface seawater to sediments. However, the isolation of PUFA producers from marine waters has been typically restricted to deep or cold environments. Here, we report a phenotypic and genotypic screening for the identification of omega-3 fatty acid producers in free-living bacterial strains isolated from 5, 500, and 1000 m deep coastal seawater from the Bay of Biscay (Spain). We further measured EPA production in pelagic Vibrio sp. strains collected at the three different depths. Vibrio sp. EPA-producers and non-producers were simultaneously isolated from the same water samples and shared a high percentage of identity in their 16S rRNA genes, supporting the view that the pfa gene cluster can be horizontally transferred. Within a cluster of EPA-producers, we found intraspecific variation in the levels of EPA synthesis for isolates harboring different genetic variants of the pfaA-KS domain. The maximum production of EPA was found in a Vibrio sp. strain isolated from a 1000 m depth (average 4.29% ± 1.07 of total fatty acids at 10 °C, without any optimization of culturing conditions). View Full-Text
Keywords: omega-3 fatty acid; eicosapentaenoic acid (EPA); Vibrio sp.; polyunsaturated fatty acid synthase Pfa; polyketide synthase (PKS); marine gamma-Proteobacteria omega-3 fatty acid; eicosapentaenoic acid (EPA); Vibrio sp.; polyunsaturated fatty acid synthase Pfa; polyketide synthase (PKS); marine gamma-Proteobacteria
►▼ Show Figures 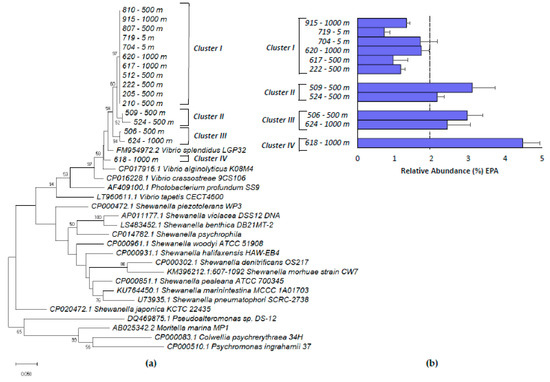