Nitrogen heterocycles have drawn considerable attention due to of their significant biological activities. The marine fungi residing in extreme environments are among the richest sources of these basic nitrogen-containing secondary metabolites. As one of the most well-known universal groups of filamentous fungi, marine-derived Aspergillus species produce a large number of structurally unique heterocyclic alkaloids. This review attempts to provide a comprehensive summary of the structural diversity and biological activities of heterocyclic alkaloids that are produced by marine-derived Aspergillus species. Herein, a total of 130 such structures that were reported from the beginning of 2014 through the end of 2018 are included, and 75 references are cited in this review, which will benefit future drug development and innovation.
Keywords: Aspergillus; metabolite; marine; alkaloid; biological activity Aspergillus; metabolite; marine; alkaloid; biological activity
►▼ Show Figures 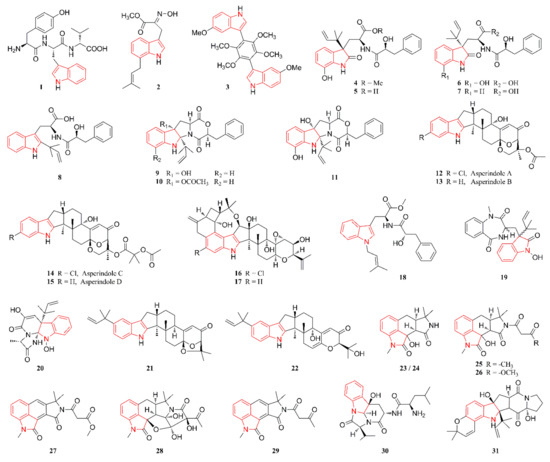