Identification of Cyanobacterial Strains with Potential for the Treatment of Obesity-Related Co-Morbidities by Bioactivity, Toxicity Evaluation and Metabolite Profiling
Next Article in Special Issue

Mitochondrial Function, Mobility and Lifespan Are Improved in Drosophila melanogaster by Extracts of 9-cis-β-Carotene from Dunaliella salina
Previous Article in Special Issue

Siderophores are low-molecular-weight metal chelators that function in microbial iron uptake. As iron limits primary productivity in many environments, siderophores are of great ecological importance. Additionally, their metal binding properties have attracted interest for uses in medicine and bioremediation. Here, we review the current state of knowledge concerning the siderophores produced by cyanobacteria. We give an overview of all cyanobacterial species with known siderophore production, finding siderophores produced in all but the most basal clades, and in a wide variety of environments. We explore what is known about the structure, biosynthesis, and cycling of the cyanobacterial siderophores that have been characterized: Synechobactin, schizokinen and anachelin. We also highlight alternative siderophore functionality and technological potential, finding allelopathic effects on competing phytoplankton and likely roles in limiting heavy-metal toxicity. Methodological improvements in siderophore characterization and detection are briefly described. Since most known cyanobacterial siderophores have not been structurally characterized, the application of mass spectrometry techniques will likely reveal a breadth of variation within these important molecules. View Full-Text
Keywords: cyanobacteria; siderophore; anachelin; synechobactin; schizokinen; Synechococcus; Anabaena cyanobacteria; siderophore; anachelin; synechobactin; schizokinen; Synechococcus; Anabaena
►▼ Show Figures 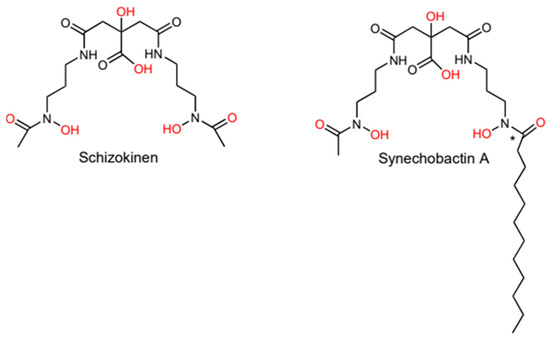