Biological Activities of Fucoidan and the Factors Mediating Its Therapeutic Effects: A Review of Recent Studies
Previous Article in Special Issue

Purification and Characterization of a Novel Pentadecapeptide from Protein Hydrolysates of Cyclina sinensis and Its Immunomodulatory Effects on RAW264.7 Cells

Brevenal, a Marine Natural Product, is Anti-Inflammatory and an Immunomodulator of Macrophage and Lung Epithelial Cells

Chronic respiratory diseases are some of the leading causes of illness and death globally [1]. Chronic obstructive pulmonary disease (COPD), cystic fibrosis (CF), and asthma can all be fatal diseases that affect lung function by increasing inflammation and decreasing mucus clearance. Inflammation is a natural biological response, and at a local site of damage or infection, it is an important mechanism for the immune system to clear harmful stimuli. However, excessive inflammation, like that which occurs during sepsis, can damage delicate organ structures, such as those found in the respiratory system. Prolonged inflammation and corresponding damage of critical organ systems can be lethal [2,3]).
Millions of people suffer globally from chronic respiratory diseases, including estimates of 65 million with COPD, 300 million with asthma, and 70,000 with CF [1,4,5,6,7,8,9]. Approximately 3 million people die each year from COPD [1,4,5]. Regrettably, it is estimated that 250,000 deaths are attributed to asthma each year, many of which could have been prevented with sufficient medical intervention [9]. Life expectancy of a patient with CF was only 5 years in the 1960s, and while the quality and length of life have improved dramatically since then, CF remains a debilitating and ultimately fatal disease [6,7,8]. As these diseases continue to have such an aggressive impact on human mortality, it is critical to progress research into the causes, prevention, and new treatments of these diseases.
Searching for novel treatments for these diseases requires exploring new drug candidates with bioactivity that can combat inflammation and mucus accumulation. The marine environment provides a diverse source of natural products with potential to treat human ailments. The marine dinoflagellate Karenia brevis is one such source of bioactive compounds. This unicellular alga produces a number of bioactive compounds with therapeutic potential, including the neurotoxic brevetoxins (PbTxs), hemibrevetoxin B, brevisin, brevisamide, tamulamides A and B, and brevenal [10,11,12,13,14,15,16]. Brevenal (Figure 1) was the first natural nontoxic ligand described that displaces PbTxs from binding to voltage-sensitive sodium channels [16]. In cell models, brevenal has been found to antagonize PbTx-induced elevations in intracellular calcium levels [17] and reduce cell death in the presence of highly toxic concentrations of PbTxs [18]. In vivo models have shown that brevenal can attenuate PbTx-induced bronchoconstriction and increase tracheal mucosal velocity in sheep [19]. The ability of brevenal to increase tracheal mucosal velocity and mucocilliary clearance has led to the patenting of brevenal as a treatment for COPD, cystic fibrosis, and asthma, as well as attempts by Silurian Pharmaceuticals to begin Phase I clinical testing for the treatment of cystic fibrosis.
During the in vivo investigation of the antagonistic effects of brevenal against brevetoxins, it was discovered that brevenal alone could also attenuate the effects of other inflammatory agents. For example, brevenal has been shown to attenuate neutrophil elastase-induced bronchoconstriction and decrease neutrophil recruitment into the lung [20,21,22]. These results indicate anti-inflammatory effects not typically seen with traditional lung clearing pharmaceuticals [20,21,22,23]. Brevenal has also been found to attenuate PbTx-induced activity and sodium influx in, but not activation of, mast cells, a key immune cell that coordinates allergic responses [24]. While brevenal shows promise as a potential therapeutic for lung disease, the mechanism by which brevenal can attenuate inflammation remains unclear.
Secondary to airway restriction, chronic respiratory diseases are often compounded by the effects of inflammation. An excessive inflammatory response can cause serious damage to lung tissues, decreasing quality of life and increasing debilitating symptoms associated with COPD, asthma, and CF. As such, ideal drug candidates for chronic respiratory disease will have a dual effect: Combat the root cause of disease (e.g., bronchoconstriction or mucus accumulation) and simultaneously reduce damaging inflammation. The purpose of our study was to examine the effects of brevenal on pro- and anti-inflammatory cytokine production from lung epithelial cells and immune cells, as an additive mechanism to its influence on airway restriction. Macrophages were used for this study because of their role in coordinating inflammatory responses, both in the lung and systemically. We further examined the effects of brevenal on phenotypic markers of macrophage activation to determine the mechanisms by which brevenal exerts an anti-inflammatory response, thereby demonstrating its utility for treating chronic respiratory diseases.

2.1. Brevenal is not Toxic for A549 Epithelial Lung Cells, MH-S Lung Macrophages, or RAW 264.7 Macrophages at Micromolar Concentrations

Cytotoxicity assays were performed to assess the potential toxicity of brevenal on model cell lines to ensure toxicity would not be an extraneous variable in results. As shown in Figure 2, brevenal did not induce cell death in A549 epithelial lung cells (Figure 2A), MH-S lung macrophages (Figure 2B), or RAW 264.7 macrophages (Figure 2C) up to 100 nM. All further studies were completed in these cell lines with concentrations of brevenal of 100 nM (−7 in log[M]) or less.

In order to investigate the potential influence of brevenal on the inflammatory response in lung tissue, we challenged the human lung epithelial cell line (A549) with lipopolysaccharide (LPS) (an inflammatory stimulus), and then measured inflammatory mediator production. A549 cells did not produce detectable levels of TNFα (data not shown), either with or without brevenal. A549 cells did produce the proinflammatory chemokine IL-8, which decreased significantly with pretreatment of nanomolar concentrations of brevenal (Figure 3).

Resident macrophages in the lung can coordinate inflammatory responses to infection or disease. To further examine the effects of brevenal on immune responses, we investigated this putative anti-inflammatory therapeutic on two monocyte/macrophage cell lines. MH-S lung macrophages and RAW 264.7 macrophages were stimulated with LPS following brevenal pretreatment. The potent proinflammatory cytokines IL-1β and TNFα were measured, as was the pleiotropic cytokine IL-6 and the anti-inflammatory cytokine IL-10. MH-S cells demonstrated a significant decrease in LPS-induced TNFα production at 24 h of 0.1 nM brevenal treatment (Figure 4F). However, there was no significant change in LPS-induced IL-6 or IL-10 production with brevenal pretreatment (Figure 4B,D). RAW 264.7 cells demonstrated a significant decrease in LPS-induced IL-1β and TNFα production following brevenal treatment (Figure 4E,G). Similar to MH-S cells, RAW 264.7 cells did not show a significant change in LPS-induced IL-6 or IL-10 secretion (Figure 4A,C). It is important to note that brevenal treatment alone, in absence of LPS stimulation, did not elicit any measurable cytokine secretion from macrophage cell lines (data not shown).
To discover a lower limit of effect, RAW 264.7 macrophages were treated with 1000-fold lower doses of brevenal and then stimulated with LPS. As shown in Figure 5, brevenal significantly inhibited LPS-induced TNFα secretion down to 1 pM concentration. Brevenal was unable to attenuate LPS-induced IL-1β secretion at the same very low concentrations (data not shown).

2.4. Treatment of RAW 264.7 Cells with Brevenal Did Not Change Cell-Surface Expression of TLR4, with or without LPS Co-Stimulation

In order to determine a potential mechanism by which brevenal exerts its anti-inflammatory actions, we assessed RAW 264.7 cells for Toll-like receptor 4 (TLR4) expression by flow cytometry. Figure 6A shows the size and complexity of cells without brevenal or LPS treatment, as assessed by a forward and side scatter dot-plot. The RAW 264.7 cells used in these experiments exhibited two distinct populations (P1 and P2). Cells were gated and each population was analyzed separately, as RAW 264.7 cells have been shown to exhibit multiple populations if samples are not filtered prior to analysis. The larger sized signals (P2) are likely caused by cell aggregation [25,26]. To avoid effects due to aggregation, the single cell population (P1) was gated from the aggregate cell population (P2), and both populations were separately assessed for TLR4 expression using a PE-conjugated anti-TLR4 antibody. It was determined that brevenal caused no significant changes in the cell-surface expression of TLR4 receptors, with or without LPS co-stimulation in single cells (Figure 6B,C). Similar to P1, the P2 population of cells did not show significant changes in the cell-surface expression of TLR4 receptors (data not shown).

2.6. Brevenal Treatment Alters the Percentage of RAW 264.7 Cells that are Aggregated in Culture

Brevenal was shown to have effects in the single cell gated population (P1) of RAW 264.7 cells, but not the aggregate cell gated population (P2). Brevenal reduced cell size and complexity, as well as activation phenotypes, in single cells. Cells have been known to aggregate in response to inflammatory stimuli because of increased expression of adhesion molecules. To determine if brevenal affected the rate of P1 and P2, we examined the percentage of cells in each population as compared to the total counts calculated in flow cytometry experiments (see Figure 6A for the gating scheme). As shown in Table 1, a low dose of brevenal significantly reduced the percentage of cells in the larger aggregate cell group. There was a corresponding increase in the percentage of cells in the smaller single cell group, but this change did not reach the level of statistical significance.

Cells were treated with brevenal acquired from Dr. Daniel Baden, extracted from K. brevis cultures as previously described [16]. A certificate of purity was obtained, demonstrating purity of greater than 95%, as determined by high pressure liquid chromatography analysis (single peak elution from C-18 reverse phase column, UV detection at 215 nm and 290 nm, mobile phase 89% methanol and 11% water). Doses of treatment ranged from 0.1 pM to 100 nM. The choice of doses was based on toxicity studies and previous studies and efficacy of brevenal as a treatment for increasing tracheal mucosal velocity and mucocilliary clearance, as any anti-inflammatory effect would be additive to its use as a CF therapy. Previous studies found efficacy of brevenal from 1 ng/mL (1.52 nM equivalent) to 50 µg/mL (76.22 µM equivalent) [20,21,22,39]. Additionally, brevenal has been found to be ineffective below 1 ng/mL [39]. Previous studies with corticosteroids have used similar ranges of 0.1 nM to 100 nM [28].

4.4. Quantification of Pro- and Anti-Inflammatory Cytokines

This research was funded in part by a Cahill Program Award from the University of North Carolina Wilmington.

The authors would like to acknowledge Daniel Baden and Susan Niven for sourcing of material and extraction of brevenal. 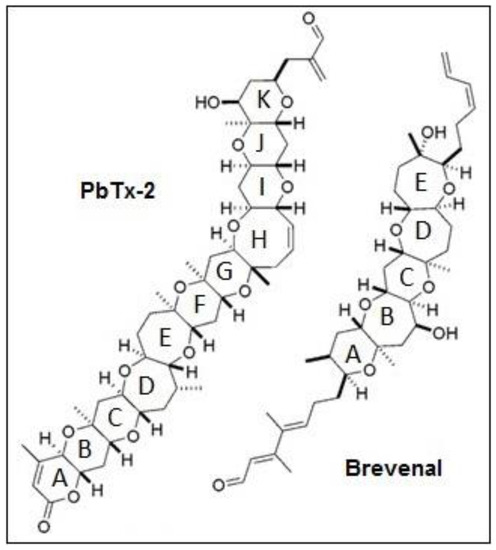 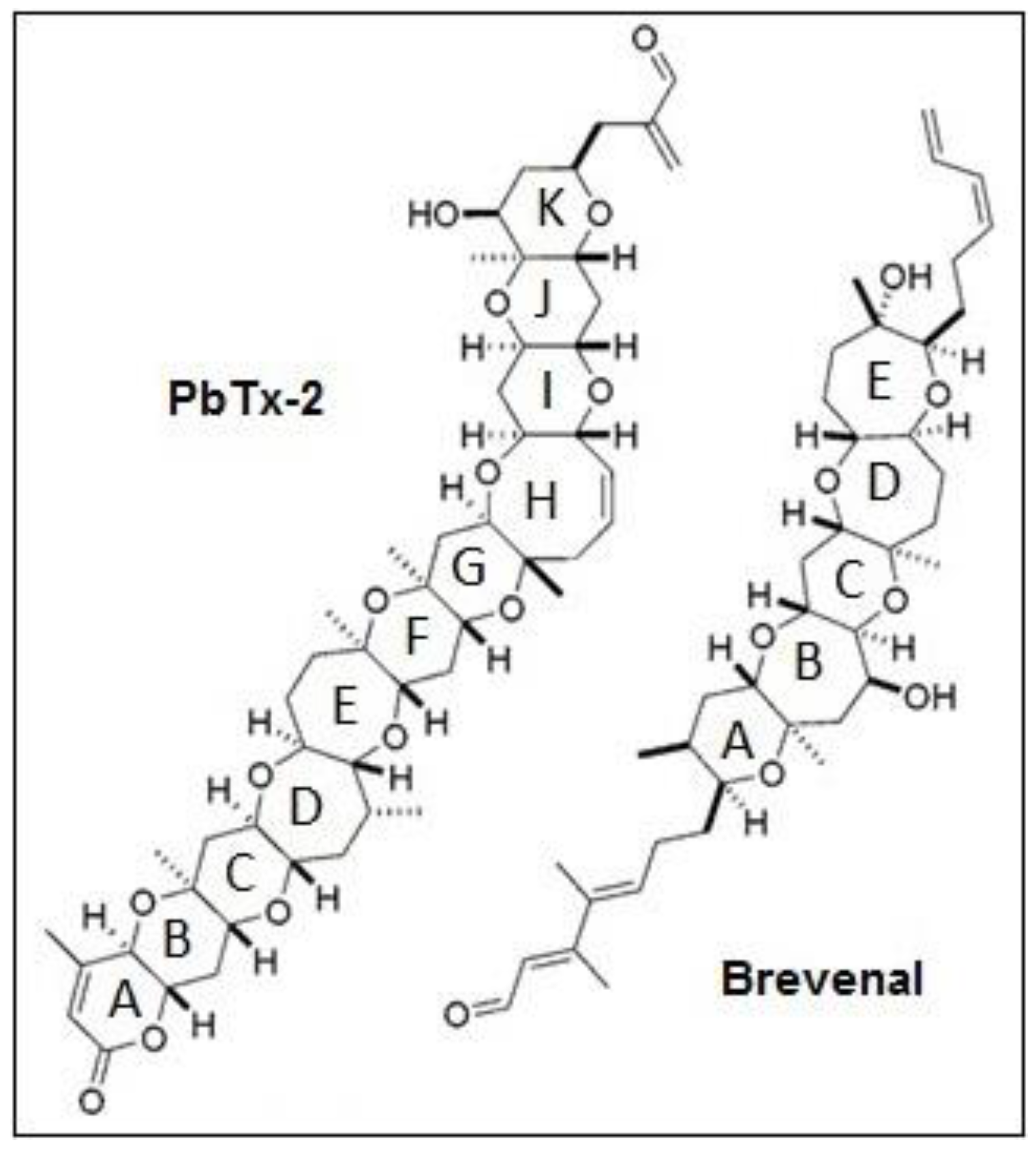 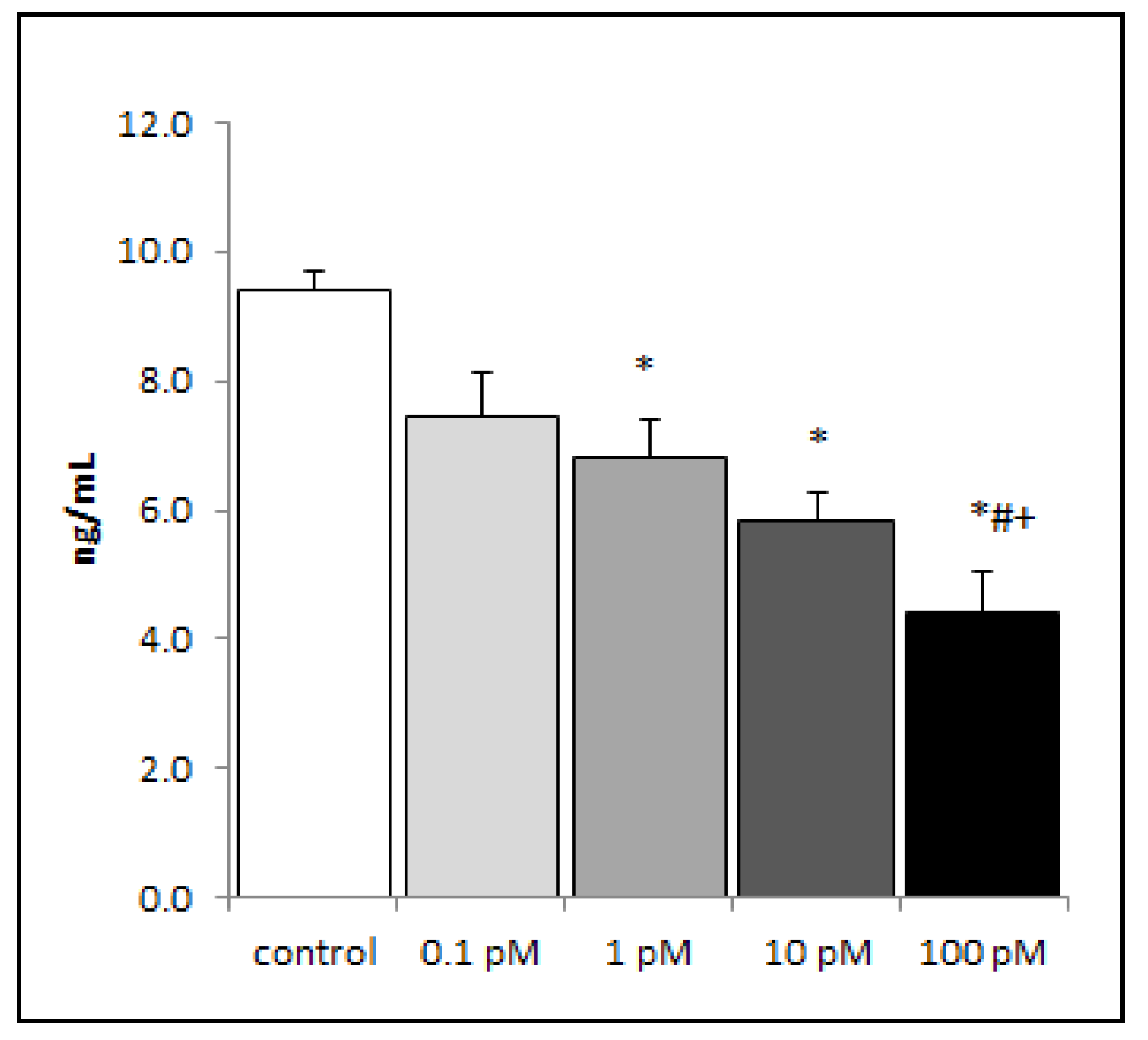