Phlorotannins are phloroglucinol-based phenolic compounds, occurring particularly in brown macroalgae, that have been recognized for their promising bioactive properties. In this study, the extraction of phlorotannins from Fucus vesiculosus was evaluated with particular emphasis on the influential parameters, including the solvent concentration, solvent-solid ratio, extraction temperature and extraction time, using a single-factor design followed by a Box-Behnken design. The maximum total phlorotannin content, determined using the 2,4-dimethoxybenzaldehyde (DMBA) method, corresponded to 2.92 ± 0.05 mg of phloroglucinol equivalents/g dry seaweed (mg PGE/g DS), and was achieved for extracts carried out with acetone 67% (v/v), a solvent-solid ratio of 70 mL/g and temperature at 25 °C. This crude extract, together with a semi-purified phlorotannin fraction, were further evaluated for their anti-enzymatic capacity against α-glucosidase, α-amylase and pancreatic lipase, both showing promising inhibitory effects, particularly against α-glucosidase for which a greater inhibitory effect was observed compared to the pharmaceutical drug acarbose (IC50 = 4.5 ± 0.8 and 0.82 ± 0.3 μg/mL, respectively, against 206.6 ± 25.1 μg/mL). Additionally, the ultra-high-pressure liquid chromatography coupled to mass spectrometry (UHPLC-MS) analysis carried out on the ethyl acetate fraction revealed the presence of fucols, fucophlorethols, fuhalols and several other phlorotannin derivatives. Moreover, possible new phlorotannin compounds, including fucofurodiphlorethol, fucofurotriphlorethol and fucofuropentaphlorethol, have been tentatively identified in this extract. Overall, this study provides evidence that F. vesiculosus phlorotannin-rich extracts hold potential for the management of the activity of α-glucosidase, α-amylase and pancreatic lipase, which are well known to be linked to metabolic disorders such as diabetes and obesity. View Full-Text
Keywords: Fucus vesiculosus; phlorotannins; α-glucosidase; α-amylase; pancreatic lipase; diabetes; obesity; response surface methodology Fucus vesiculosus; phlorotannins; α-glucosidase; α-amylase; pancreatic lipase; diabetes; obesity; response surface methodology
►▼ Show Figures 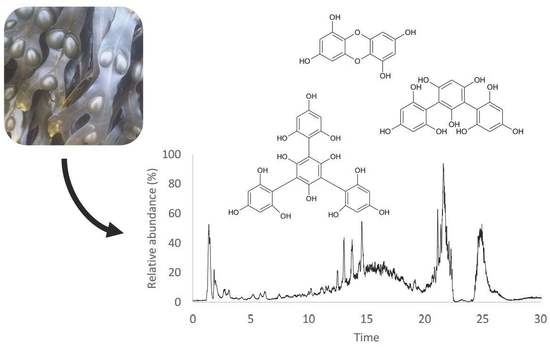