In Silico Identification and Experimental Validation of (−)-Muqubilin A, a Marine Norterpene Peroxide, as PPARα/γ-RXRα Agonist and RARα Positive Allosteric Modulator
Next Article in Special Issue

The cyclic peptides portoamides produced by the cyanobacterium Phormidium sp. LEGE 05292 were previously isolated and their ability to condition microcommunities by allelopathic effect was described. These interesting bioactive properties are, however, still underexplored as their biotechnological applications may be vast. This study aims to investigate the antifouling potential of portoamides, given that a challenge in the search for new environmentally friendly antifouling products is to find non-toxic natural alternatives with the ability to prevent colonization of different biofouling species, from bacteria to macroinvertebrates. A multi-bioassay approach was applied to assess portoamides antifouling properties, marine ecotoxicity and molecular mode of action. Results showed high effectiveness in the prevention of mussel larvae settlement (EC50 = 3.16 µM), and also bioactivity towards growth and biofilm disruption of marine biofouling bacterial strains, while not showing toxicity towards both target and non-target species. Antifouling molecular targets in mussel larvae include energy metabolism modifications (failure in proton-transporting ATPases activity), structural alterations of the gills and protein and gene regulatory mechanisms. Overall, portoamides reveal a broad-spectrum bioactivity towards diverse biofouling species, including a non-toxic and reversible effect towards mussel larvae, showing potential to be incorporated as an active ingredient in antifouling coatings. View Full-Text
Keywords: biofouling; antifouling; cyanobacteria; natural products; marine biofilms; mode of action biofouling; antifouling; cyanobacteria; natural products; marine biofilms; mode of action
►▼ Show Figures 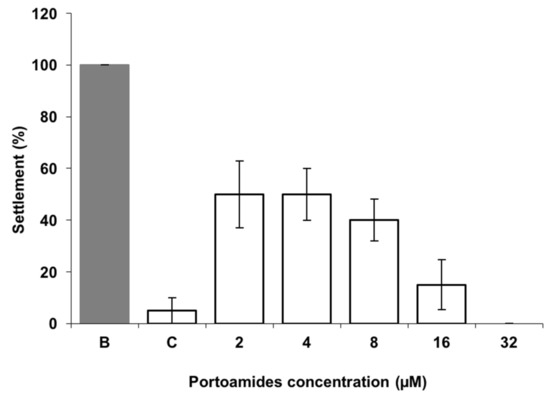