Difference in Uptake of Tetrodotoxin and Saxitoxins into Liver Tissue Slices among Pufferfish, Boxfish and Porcupinefish
Previous Article in Journal

Tetrodotoxins (TTXs) are traditionally associated with the occurrence of tropical Pufferfish Poisoning. In recent years, however, TTXs have been identified in European bivalve mollusc shellfish, resulting in the need to assess prevalence and risk to shellfish consumers. Following the previous identification of TTXs in shellfish from southern England, this study was designed to assess the wider prevalence of TTXs in shellfish from around the coast of the UK. Samples were collected between 2014 and 2016 and subjected to analysis using HILIC-MS/MS. Results showed the continued presence of toxins in shellfish harvested along the coast of southern England, with the maximum concentration of total TTXs reaching 253 µg/kg. TTX accumulation was detected in Pacific oysters (Crassostrea gigas), native oysters (Ostrea edulis) common mussels (Mytilus edulis) and hard clams (Mercenaria mercenaria), but not found in cockles (Cerastoderma edule), razors (Ensis species) or scallops (Pecten maximus). Whilst the highest concentrations were quantified in samples harvested during the warmer summer months, TTXs were still evident during the winter. An assessment of the potential causative factors did not reveal any links with the phytoplankton species Prorocentrum cordatum, instead highlighting a greater level of risk in areas of shallow, estuarine waters with temperatures above 15 °C. View Full-Text
Keywords: Tetrodotoxins; bivalve molluscs; HILIC-MS/MS; UK shellfish; Tetrodotoxin Shellfish Poisoning (TSP) Tetrodotoxins; bivalve molluscs; HILIC-MS/MS; UK shellfish; Tetrodotoxin Shellfish Poisoning (TSP)
►▼ Show Figures 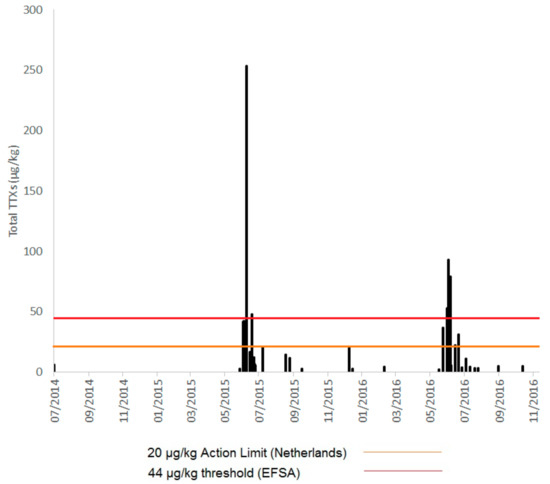