A Study of 11-[3H]-Tetrodotoxin Absorption, Distribution, Metabolism and Excretion (ADME) in Adult Sprague-Dawley Rats
Next Article in Special Issue

Cyanobacterial Toxins of the Laurentian Great Lakes, Their Toxicological Effects, and Numerical Limits in Drinking Water

Chelsea A. Weirich
and

Cyanobacteria are ubiquitous phototrophic bacteria that inhabit diverse environments across the planet. Seasonally, they dominate many eutrophic lakes impacted by excess nitrogen (N) and phosphorus (P) forming dense accumulations of biomass known as cyanobacterial harmful algal blooms or cyanoHABs. Their dominance in eutrophic lakes is attributed to a variety of unique adaptations including N and P concentrating mechanisms, N2 fixation, colony formation that inhibits predation, vertical movement via gas vesicles, and the production of toxic or otherwise bioactive molecules. While some of these molecules have been explored for their medicinal benefits, others are potent toxins harmful to humans, animals, and other wildlife known as cyanotoxins. In humans these cyanotoxins affect various tissues, including the liver, central and peripheral nervous system, kidneys, and reproductive organs among others. They induce acute effects at low doses in the parts-per-billion range and some are tumor promoters linked to chronic diseases such as liver and colorectal cancer. The occurrence of cyanoHABs and cyanotoxins in lakes presents challenges for maintaining safe recreational aquatic environments and the production of potable drinking water. CyanoHABs are a growing problem in the North American (Laurentian) Great Lakes basin. This review summarizes information on the occurrence of cyanoHABs in the Great Lakes, toxicological effects of cyanotoxins, and appropriate numerical limits on cyanotoxins in finished drinking water. View Full-Text
Keywords: microcystin; saxitoxin; cylindrospermopsin; anatoxin-a; anatoxin-a(S); cyanobacteria; phosphatase inhibitor; acetylcholinesterase; neurotoxicity; drinking water microcystin; saxitoxin; cylindrospermopsin; anatoxin-a; anatoxin-a(S); cyanobacteria; phosphatase inhibitor; acetylcholinesterase; neurotoxicity; drinking water
►▼ Show Figures 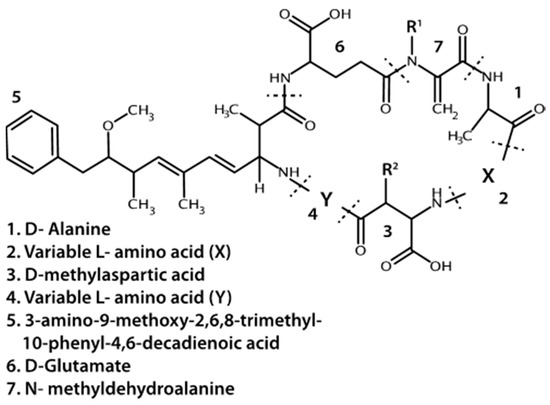