Red Algae (Rhodophyta) from the Coast of Madagascar: Preliminary Bioactivity Studies and Isolation of Natural Products
Next Article in Special Issue

Marine Compounds and Cancer: Where Do We Stand?
Previous Article in Journal

Finkel-Biskis-Reilly murine sarcoma virus (FBR-MuSV) ubiquitously expressed (FAU) gene is down-regulated in human prostate, breast and ovarian cancers. Moreover, its dysregulation is associated with poor prognosis in breast cancer. Sponges (Porifera) are animals without tissues which branched off first from the common ancestor of all metazoans. A large majority of genes implicated in human cancers have their homologues in the sponge genome. Our study suggests that FAU gene from the sponge Suberites domuncula reflects characteristics of the FAU gene from the metazoan ancestor, which have changed only slightly during the course of animal evolution. We found pro-apoptotic activity of sponge FAU protein. The same as its human homologue, sponge FAU increases apoptosis in human HEK293T cells. This indicates that the biological functions of FAU, usually associated with “higher” metazoans, particularly in cancer etiology, possess a biochemical background established early in metazoan evolution. The ancestor of all animals possibly possessed FAU protein with the structure and function similar to evolutionarily more recent versions of the protein, even before the appearance of true tissues and the origin of tumors and metastasis. It provides an opportunity to use pre-bilaterian animals as a simpler model for studying complex interactions in human cancerogenesis. View Full-Text
Keywords: ribosomal protein genes; snoRNA; FAU; RPS30; SNORA62; evolution; Porifera ribosomal protein genes; snoRNA; FAU; RPS30; SNORA62; evolution; Porifera
►▼ Show Figures 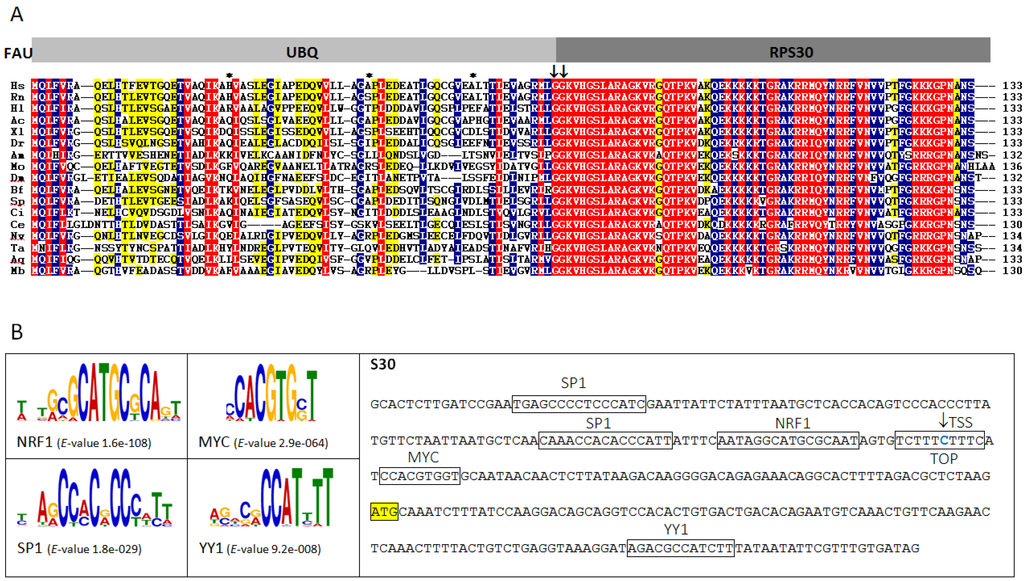