Synucleins (syns) are a family of proteins involved in several human neurodegenerative diseases and tumors. Since the first syn discovery in the brain of the electric ray Torpedo californica, members of the same family have been identified in all vertebrates and comparative studies have indicated that syn proteins are evolutionary conserved. No counterparts of syns were found in invertebrates suggesting that they are vertebrate-specific proteins. Molecular studies showed that the number of syn members varies among vertebrates. Three genes encode for α-, β- and γ-syn in mammals and birds. However, a variable number of syn genes and encoded proteins is expressed or predicted in fish depending on the species. Among biologically verified sequences, four syn genes were identified in fugu, encoding for α, β and two γ (γ1 and γ2) isoforms, whereas only three genes are expressed in zebrafish, which lacks α-syn gene. The list of “non verified” sequences is much longer and is often found in sequence databases. In this review we provide an overview of published papers and known syn sequences in agnathans and fish that are likely to impact future studies in this field. Indeed, fish models may play a key role in elucidating some of the molecular mechanisms involved in physiological and pathological functions of syn proteins. View Full-Text
Keywords: synuclein; fish; brain; zebrafish; carp synuclein; fish; brain; zebrafish; carp
►▼ Show Figures 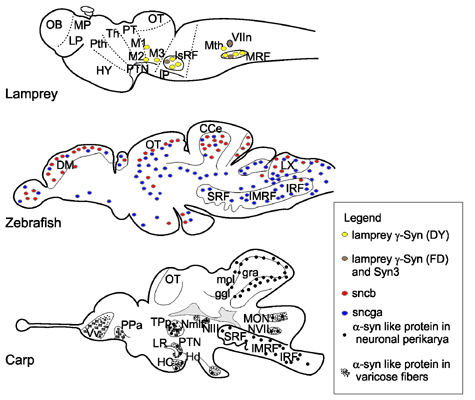