Nitric oxide (NO) is generated via the oxidation of l-arginine by the enzyme NO synthase (NOS) both in vertebrates and invertebrates. Three NOS isoforms, nNOS, iNOS and eNOS, are known in vertebrates, whereas a single NOS isoform is usually expressed in invertebrates, sharing structural and functional characteristics with nNOS or iNOS depending on the species. The present paper is focused on the constitutive Ca2+/calmodulin-dependent nNOS recently sequenced by our group in the neogastropod Stramonita haemastoma (ShNOS). In this paper we provide new data on cellular distribution of ShNOS in the CNS (pedal ganglion) and peripheral organs (osphradium, tentacle, eye and foot) obtained by WB, IF, CM and NADPHd. Results demonstrated that NOS-like proteins are widely expressed in sensory receptor elements, neurons and epithelial cells. The detailed study of NOS distribution in peripheral and central neurons suggested that NOS is both intracellular and presynaptically located. Present findings confirm that NO may have a key role in the central neuronal circuits of gastropods and in sensory perception. The physiological relevance of NOS enzymes in the same organs was suggested by thermal stress experiments demonstrating that the constitutive expression of ShNOS is modulated in a time- and organ-dependent manner in response to environmental stressors. View Full-Text
Keywords: nitric oxide synthase; S. haemastoma; neogastropoda; thermal stress; gene expression; confocal microscopy; RT-PCR; western blot nitric oxide synthase; S. haemastoma; neogastropoda; thermal stress; gene expression; confocal microscopy; RT-PCR; western blot
►▼ Show Figures 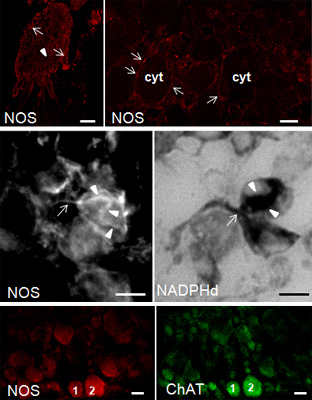